July 26 2013
95
The UK government has made a statement that it is ready to invest 60 million pounds sterling (almost 3 billion rubles) in the project of the private company Reaction Engines. The engineers of this company expect to build a working model of a completely new commercial air-jet engine. This engine will be named Saber - an abbreviation of the phrase Synergetic Air-Breathing Rocket Engine (synergistic rocket engine). Currently, laboratory tests of prototypes of the new engine have already been successfully completed, which became an additional incentive for the state to invest in this project.


The Saber-based aircraft can fly to the stratospheric border in just 15 minutes, and travel, for example, from Australia to the USA in just 4 hours. The speed of such an aircraft would have exceeded the speed of sound immediately 5 times. Currently, Reaction Engines plans include equipping their famous Skylon aircraft, which could potentially accelerate to 5635 km / h. According to representatives of the British company, Skylon has every chance to become a real “spacecraft” and fly in low-Earth orbit.

Traditional engines that are used today in aviationrequire the transportation of special tanks filled with liquid oxygen, if the aircraft develops in flight a speed of more than 3000 km / h. Such aircraft cannot “breathe” ordinary air, as it would heat up to very high temperatures. At the same time, the Saber engine allows you to use air instead of liquid oxygen: it is equipped with a whole system of tubes that are filled with helium. When air passes through these tubes, helium cools it, and oxygen of the required temperature (-150 degrees Celsius instead of the initial 1000 degrees) is delivered directly to the engine. 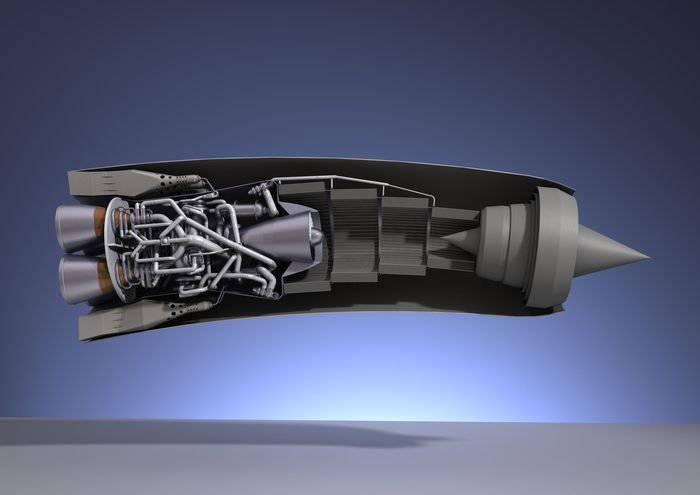 Developed by Reaction Engines, the Saber engine is able to operate in 2-s modes: as a jet engine and as a rocket engine. According to the company, using this engine on a Skylon aircraft will allow it to exceed the speed of sound in the Earth’s atmosphere 5 times and 25 times in open space. A key element of this engine, which will allow it to work efficiently within the atmosphere, is a pre-cooler, in which incoming outside air with a temperature of the order of 1000 degrees is cooled to a temperature of -150 degrees in just one hundredth of a second.

As soon as Skylon gets into space, it can be transferred to the so-called "space mode". In this case, the aircraft will be able to be in low earth orbit for 36 hours. This time is more than enough, for example, to launch a satellite. At the same time it will be a very profitable technology. According to Alan Bond, who is the founder of the company, the amount required to launch satellites and other similar missions may decrease immediately by 95% if commercial production of Saber engines is established.

In addition, new spaceships built on jet engines can be a very good prospect in the space tourism market. In this case, the English company Reaction Engines can become a very strong competitor for Virgin Galactic, which is owned by Richard Branson. Now the billionaire offers everyone to see our planet in the porthole for just 121 thousand pounds (almost 6 million rubles). Representatives of the company Reaction Engines declare that the flight on their Skylon spacecraft will cost the space tourists much cheaper, though they don’t say how much exactly. More details about the plans of the UK government regarding the financing of this ambitious project will be known when a special Space Conference will be held in Glasgow. 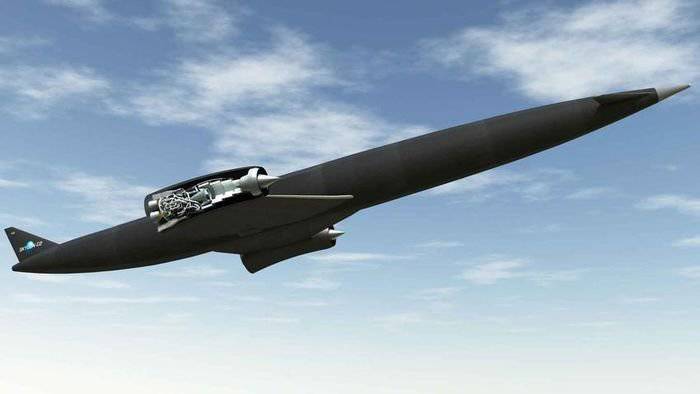 The idea of ​​designing a pre-cooled engine first appeared in Robert Carmichael back in the distant 1955 year. This idea was followed by the idea of ​​creating an engine with liquefaction of air (LACE), which was originally worked out by Marquardt and General Dynamics in the 60s of the last century, as part of the US Air Force's work on the Aerospaceplane project.

However, work on the Saber engine project was launched only in 1989 year, this year the company Reaction Engines Limited was formed. The company's specialists continued to work on the project, developing the ideas presented earlier. As a result, the creation of the Saber hybrid engine took 22 a year to come from a research team of 30 people. The fruit of their efforts was the construction of the engine layout, which was installed on the Skylon aircraft, which was demonstrated at the Farnborough Airshow.

The subject of the latest tests, which were conducted by the company Reaction Engines, was the technology of air pre-cooling. Currently, the specialists of this company, having in their hands a workable technology, are engaged in the development of a prototype of the cooling system. This sample should have a relatively low weight, and also demonstrate aerodynamic stability, high mechanical strength, and resistance to strong vibration. According to the company's plans, the tests of the prototype of the cooler were to begin as early as August of the 2012 year.

By November 2012, Reaction Engines completed equipment testing as part of the heat exchanger technology project critical to a hybrid rocket engine powered by air and liquid oxygen. It was a very important stage in the process of creating a hybrid engine, which proved to all potential investors of the project the viability of the technologies presented. The Saber engine is based on a heat exchanger that is able to cool the incoming air to a temperature of -150 ° C (-238 ° F). In the process, the cooled air is mixed with liquid hydrogen and then, burning, it provides the necessary traction for atmospheric flight, before switching to liquid oxygen from the tanks, when flying out of the earth's atmosphere. Successfully carried out tests of this, quite critical technology, confirmed in practice that the heat exchanger is able to meet the needs of the hybrid engine in obtaining the required amount of oxygen from the atmosphere to function with high efficiency in low-altitude flight conditions. 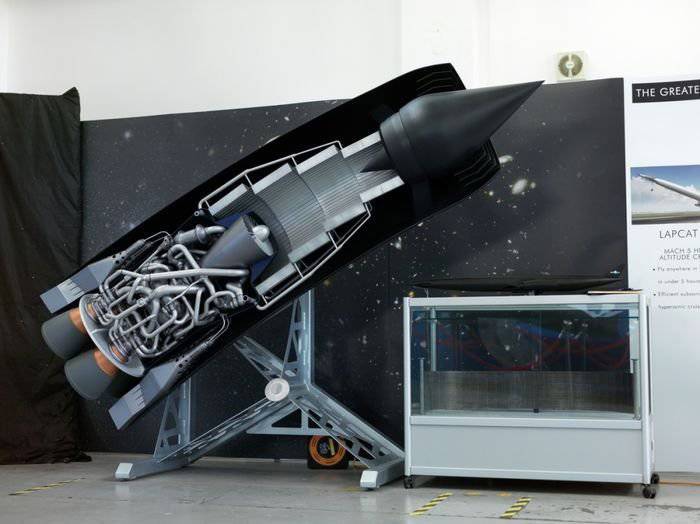 At the Farnborough Air Show in 2012, David Willets, Minister for University Affairs and Science of the United Kingdom, praised this development. In particular, the Minister said that this hybrid engine could have a real effect on the conditions of the game, which have been formed in the space industry today. Successful testing of the engine pre-cooling system was a confirmation of the high appreciation of the proposed concept, which the British Space Agency made in 2010. The minister also noted the fact that if one day they manage to apply this technology to organize their own commercial flights, then this will undoubtedly become a fantastic event.

David Willets also noted the fact that there is a small chance that the European Space Agency will agree to fund the Skylon project. For this reason, the UK should be prepared for the fact that it will have to deal with the construction of the spacecraft, mostly for its own money.

Estimated thrust-to-weight ratio of the Saber hybrid engine is assumed to be more than 14 units. It is worth noting that the thrust-to-weight ratio of ordinary jet engines is within 5 units, and only 2 units for supersonic direct-flow engines. Such a high level of productivity was achieved through the use of over-cooled air, which becomes very dense and requires less compression, and, even more significantly, due to low operating temperatures, it was possible to use sufficiently lightweight alloys for most of the hybrid engine design. 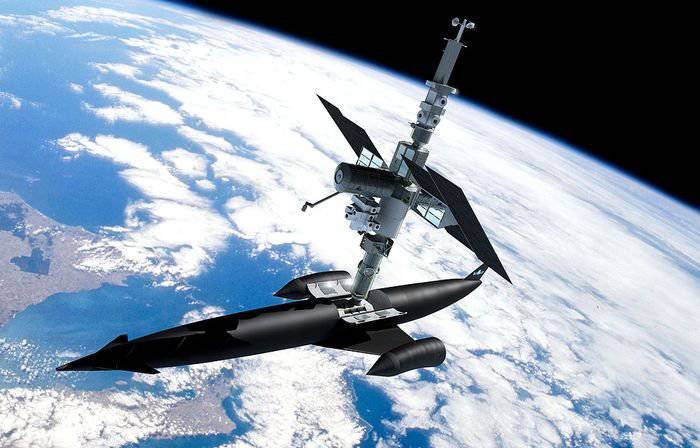 The combination of low engine mass and high fuel efficiency gives the prospective Skylon aircraft the opportunity to reach orbit in a single-stage mode, while the engine operates as an air-jet engine for speed M = 5,14 and flight altitude 28,5 km. At the same time, the aerospace vehicle is able to reach orbit with a very large payload relative to the take-off weight of the aircraft itself. What previously could not be achieved by any non-nuclear aircraft.

Unlike its traditional rocket brethren, and like other types of jet engines, the new English hybrid jet engine can use air to burn fuel, which reduces the required rocket fuel weight, while increasing the weight of the payload. The ramjet airjet engine (ramjet) and the hypersonic ramjet airjet engine (scramjet) must spend a sufficiently large amount of time in the lower layers of the atmosphere in order to develop a speed sufficient to enter orbit, which in turn brings to the fore the problem of intense heating. engine at hypersonic speed, as well as possible losses due to the complexity of thermal protection and significant weight. 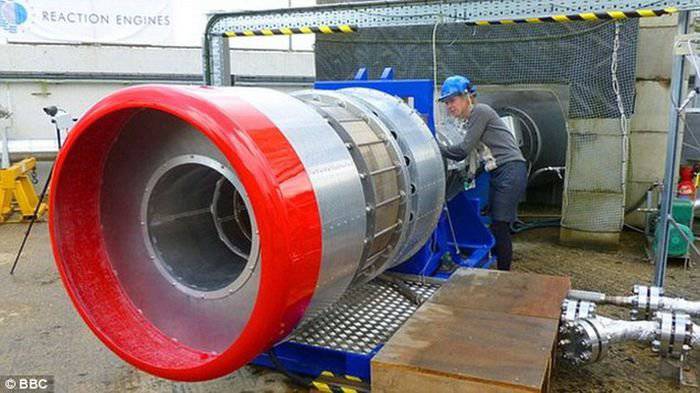 At the same time, a hybrid Saber-like jet engine needs only to achieve a low hypersonic speed (it is worth recalling that hypersound is all that after M = 5) in the lower layers of the Earth’s atmosphere, before switching to a closed cycle of work and making a steep rise from set speed in rocket mode.

Unlike traditional ramjet or scramjet engines, the new English Saber engine is able to provide high thrust from zero speed to speed in M ​​= 5,14 inclusive, over the entire altitude range, with very good efficiency over the entire altitude range. In addition, the ability to create thrust even at zero speed indicates the possibility of testing a hybrid engine on the ground, which significantly reduces the cost of development.

Ctrl Enter
Noticed oshЫbku Highlight text and press. Ctrl + Enter
We are
US senators proposed to develop a rocket engine to replace the RD-180Skylon getting closer
Military Reviewin Yandex News
Military Reviewin Google News
95 comments
Information
Dear reader, to leave comments on the publication, you must sign in.