Under Stalin, everything was not the same as in Europe. Therefore, we are still alive 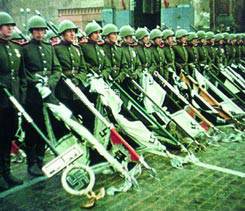 The Memorial Society is demanding that Stalin’s grave, as well as all his associates, be removed from Red Square in Moscow. The fact that if it were not for Stalin - on the site of Red Square now would be the German office, MacDonalds or a cheap film studio, of course, does not matter. It is much more important to listen to the opinion of outspoken paranoids who always make up endless lists of nonexistent victims - just because this is the opinion of the so-called “civilized Europe” and “progressive world community”.

The most sensible judgment on this subject was expressed by political scientist Oleg Matveychev:

“And now, let's ask ourselves some hard questions:
Would it be better if the USSR was headed by any of the democratic leaders, such as those who were in the leadership of Poland, the Netherlands, France, or was it better that Stalin headed it?

It would be better if we in the USSR had free democratic media spreading panic and working for the enemy, or it’s still better that Hitler did not destroy 100 millions of Russians as he had planned, and without free media, we somehow managed ...

It is better or not for us that Stalin educated people for whom the cry “Motherland is in danger” meant that we had to get up and die, and not, as for the French, that we needed to collect our belongings and drape? ...

Is it better for us that in XNUMH years we cleared all possible ground for the penetration of any agents and the “fifth column”, or did we have to perform our quick and ridiculous repressions after the start of the war in a hurry like distraught Europeans?

After all, Hitler planned a blitzkrieg on the territory of Russia ... Only he didn’t work, didn’t work: the population evacuated in an organized way, even with industry, the army defended with courage and heroism, no saboteurs couldn’t sow any panic, Stalin and the government didn’t sow panic become…

Leaflets Goebbels also had no impact ...

Therefore, they are still alive.

We will take into account that criticism of Stalin for the fact that he "did not prepare for war correctly and lost a lot of people" is carried out by fans of the West, the one who was defeated in general in three days, and after all this shame it would be better for all of them to shut up forever. Now every smelly “Frenchman from Bordeaux” (they are all humanists and liberals there!) Pokes us with a finger “GULAG, GULAG”, condemns us for repression ... These genetic cowards, having pulled up their trousers who fled from Hitler, hid on their riviera, while for their freedom millions of Russians shed blood; they have no historical voice at all! They have not yet redeemed their historical a shame!".