July 26 2013
30
At a special presentation at the Houston Product Support Center, located near the Johnson Space Center (Texas, USA), Boeing showed the CST-100 model, a manned transport spacecraft that will replace the shuttle, as close to reality as possible. 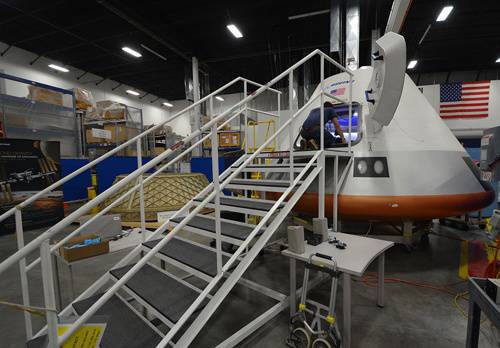 The CST-100 is being designed with support from NASA. It will be used to deliver cargo and astronauts to the International Space Station (ISS) and, possibly, other orbital complexes like the Bigelow Aerospace Orbital Space Complex.

The ship under development will be able to take on board up to seven people. The appearance of the CST-100 resembles an enlarged Apollo command module. The ship is designed for use in low earth orbit (up to 100 km). 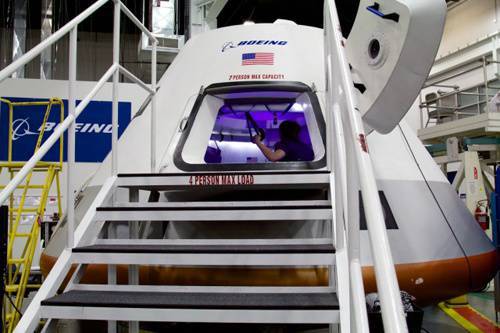 Here and below is the photo of Lee Hutchinson / Ars Technica.

To control the CST-100 are three pairs of engines. Located on the sides of the power plant will provide maneuvering. Two more engines create the main thrust; In addition, there are two additional units. If the fuel in the system separating the capsule and the launch vehicle is not used (for example, if the launch is unsuccessful), it can then be spent in orbit.

The CST-100 capsule consists of two modules - an instrument-aggregate compartment and a descent vehicle. The first contains the necessary flight control systems, and the second is designed to ensure the normal existence of astronauts on board and the storage of cargo.

The instrument compartment will be separated from the descent vehicle before entering the atmosphere. The return of the capsule to Earth will provide a one-time thermal protection, parachutes and inflatable pillows. 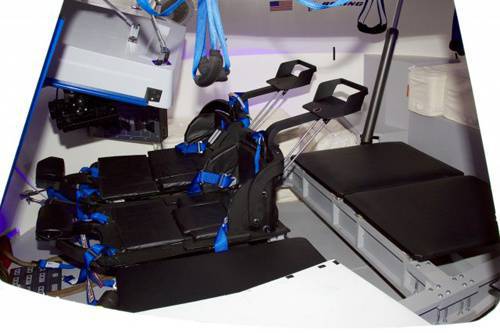 CST-100 is a new generation of spacecraft. Despite the fact that today NASA has allocated about $ 570 million for the project, Boeing will act as the owner and operator of the device.

The capsule layout shown has a diameter of 4,5 meter. While the main part of the equipment of the device - also layouts. For example, inside there is a fake control panel with inoperative switches and information indicators.

Inside the capsule is rather cramped, which, however, should not be surprising. The interior includes many different storage and telescopic supports. In general, as noted, Boeing uses the most advanced technologies and materials. 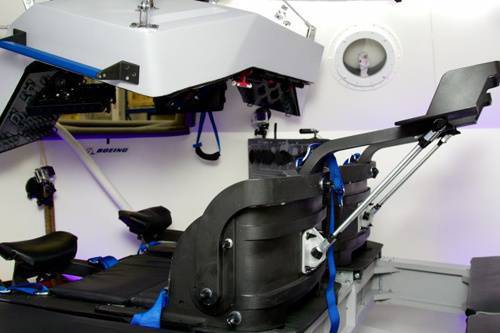 In the current form, the device is designed for five people, and two additional places are reserved for the storage compartment. Of course, the configuration of the commercial version will be different from the layout. In particular, there will be a system for utilization of waste and waste products, which is not yet available.

On the control panel, in addition to the toggle switches and manual controls, touch control panels will be located. The capsule is equipped with two portholes - front and side. 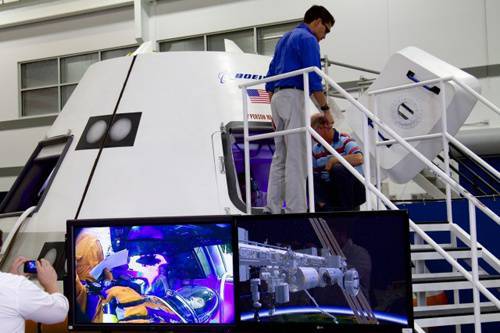 The second most important (after ensuring safety and stability of flights) task facing the developers of CST-100 is the reduction in the cost of launches. If possible, the capsule will use components and units designed for commercial products and airliners. For example, a number of electronic components, such as touchscreens, are planned to be ordered from manufacturers of tablet computers. 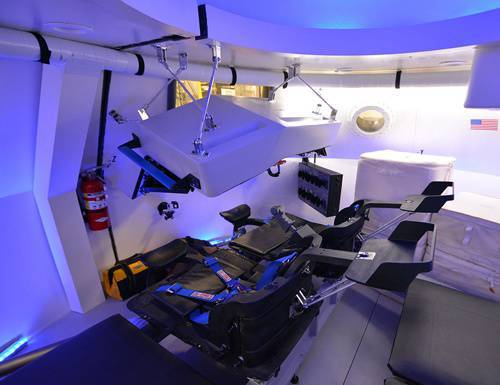 The first launches of CST-100 are scheduled for 2015 or 2016 year. The launch of the ship will be carried out with the help of the Atlas V rocket. A soft landing upon returning to Earth, as already noted, will provide parachutes and inflatable pillows. However, in the event of an abnormal situation, the capsule will be able to splash down in the ocean.

Ctrl Enter
Noticed oshЫbku Highlight text and press. Ctrl + Enter
We are
An-12 in AfghanistanStavatti Aerospace - New player on the margins of the military-industrial complex of the USA or another Pentagon duck? PART-1
Military Reviewin Yandex News
Military Reviewin Google News
30 comments
Information
Dear reader, to leave comments on the publication, you must to register.