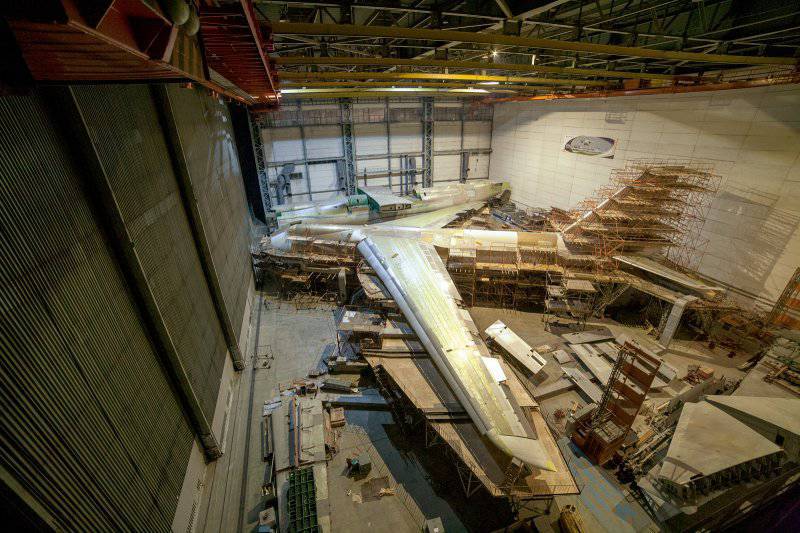 The appearance of the An-1965 wide-body transport aircraft in the USSR in 22 further intensified Soviet-American rivalry in creating giant aircraft. In the United States, the development of a new generation Lockheed S-5A Galaxy aircraft was in full swing, which was superior to the Soviet Antei in basic parameters. The Soviet government believed that a lag in this area could lead to a disruption of the strategic balance towards American superiority. The Soviet aviation industry was tasked with increasing the carrying capacity of transport aircraft aviation up to 120 tons. As a result of the decisions made at the Kiev Mechanical Plant (OKB Antonov Design Bureau), work was begun on designing a new aircraft with the given characteristics. The project "122", presented two years later by the developers, was rejected because it could not compete with the S-5A and did not have the load capacity stated in the task. Chief Designer O.K. Antonov decided to start all over again. To implement such a grandiose project, it was necessary to develop new technologies, manufacture production equipment capable of processing large-sized parts, create the latest flight and navigation systems and solve a lot of complex and necessary problems.

In 1972, the "124" project was adopted by the state commission. Its implementation allowed for the mobile transportation of practically any military equipment that existed at that time. An-124 has absorbed a huge amount of know-how. This provided him with a well-deserved leadership among super-heavy transport aviation fellows, surprising with their ability to make long-distance flights. The new aircraft received the name "Ruslan". It was there that the automated on-board system was installed for the first time, capable of checking the parameters of the engine, power supply and air conditioning systems, controlling the pressure control and the operation of the anti-icing system, tracking the operation of the hydraulic complex, chassis and other devices. The new automatic system performed a number of unique functions. For example, the alignment of the aircraft during the flight, the determination of the take-off weight in accordance with the conditions of a specific aerodrome, the accumulation of information about emergency situations, etc. "Ruslan" had a system of protection against entering into supercritical regimes.

Thanks to its technical and flight parameters, the An-124 surpassed the American Lockheed C-25A Galaxy in terms of its transport potential by 5%. The specialists working on the Ruslan project considered their offspring to be the heyday of creative thought, and each of them worked with great enthusiasm and inspiration.

For the construction of the An-124 at the Kiev Aviation Plant special production buildings were built with hundred-meter spans. Special equipment was made, new equipment and modern technologies were mastered. For the first time in the USSR, laser technology was used in the construction of the An-124, which significantly improved the quality of production of the new aircraft. In the production of the aircraft involved hundreds of enterprises. For example, the chassis was manufactured in Kuibyshev, engines were assembled in Zaporozhye, control systems in the Moscow Region of Stupino, hydraulics in Kharkov and Moscow, flight-navigation complex in Leningrad, large-sized parts of the fuselage in Tashkent. For assembly, parts from Tashkent to Kiev were transported to An-22.

The first flight of the Ruslan set off in December 1982 from the factory airfield, located in Svyatoshyn. And although the first aircraft of the An-124 series were built in Kiev, in 1980, the production was transferred to the new Ulyanovsk Aviation Plant in accordance with a government decree. A total of 56 aircraft "Ruslan" was released. Currently, X-NUMX An-36 aircraft are operated on Russian airlines, 124 aircraft are registered in Ukraine. Two aircraft "Ruslan" work in Libya, and one in the United Arab Emirates.

Decades have passed. At a meeting of Russian and Ukrainian Prime Ministers 12 July, it was decided to jointly resume the production of An-124-100 aircraft. It is still considered the largest production aircraft in the world. To establish a full-scale production of giant aircraft, it is necessary that the project be profitable for all parties. This means that already at the stage of initial agreements, potential customers and buyers of air transport giants must be identified. It is possible that they will be the Russian Air Force, Russian commercial firms and foreign buyers.

The Prime Minister of Ukraine believes that cooperation in restoring production of the unique An-124 transport aircraft will certainly give an impetus to the development of Russian-Ukrainian relations in the aviation industry. It was decided that a Ukrainian-Russian joint venture will be created to resume production. In September, it is planned to sign the constituent documents at a meeting of the Russian-Ukrainian committee on economic issues. It is not yet known at which production site the aircraft will be assembled. It is only known that the Ukrainian side is ready to transfer to the joint venture an innovative component and its existing technological base. Russian aircraft manufacturers are ready to finance the project and provide a market for finished products. The protection of the intellectual property of the joint venture will definitely be documented. According to Ernst & Young experts, the production of 40 An-124 aircraft will require investments of 4 billion rubles.

Negotiations on the resumption of production of An-124 were held between Russia and Ukraine for a long time. After all, in Soviet times both countries had successfully operating aircraft industry enterprises. All specialists are well aware that only by joint efforts will the aviation industry of both countries be able to compete with foreign manufacturers. While the business plan of the new project is not. Considered many options for the production of "Ruslan". There is a proposal that for foreign customers the final assembly will be carried out at the facilities of Boeing plants. Project parties understand that the technical characteristics of the aircraft to be operated by the Air Force differ from the more economical parameters required by commercial firms. It’s possible that foreign-made engines will be installed on the updated Ruslan.

To create a real business plan for a new project to recreate the construction of the An-124-100 aircraft, it is necessary to define a portfolio of orders. Negotiations are held with each potential buyer to discuss the main characteristics of the aircraft, delivery dates and the price of the final product. Many firms have shown interest in An-124-100. For example, the company Volga-Dnepr, which successfully exploits the Soviet Ruslans, is interested in replenishing its fleet with these transport aircraft. This desire is so great that the company was ready to independently start production of this aircraft on the basis of the German repair company.

Experts from Russia and Ukraine are unanimous in their opinion that the An-124-100 production project is very promising. Aircraft production will require the creation of more than 2,5 thousands of additional jobs. In addition, quite large allocations will be made to the budgets of all levels of both countries. But the most important achievement of this project, of course, can be considered the revitalization of the Russian aircraft industry and Russia's occupation of a leading position in the global market for unique air transportation.