The USA and the Russian Federation switched roles after the Cold War. Insider Opinion 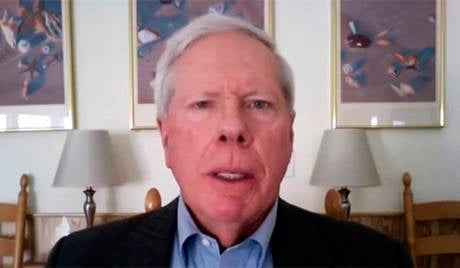 In an interview with Golos Rossii, Paul Craig Roberts, deputy secretary of the treasury in the Reagan administration, said that the United States is ruled by "the government that came to power in a military coup."


Paul Craig Roberts - Former deputy editor-in-chief of The Wall Street Journal and one of the creators of Reaganomics. Earlier, he expressed the same radical point of view on his personal website. The Voice of Russia correspondent asked Mr. Roberts to comment on his statement.

- Do not you think that you use too strong expressions when talking about a coup d'état. We are used to having coups in other countries - in Latin America, in Africa. Formally, the current government in the United States was elected by the people. So what do you mean by a coup d'état — perhaps the inability of the last few American administrations to comply with the foundations of the US Constitution? Can you say so?

- Yes, you can say that. Since the beginning of the XXI century (the Bush and Obama administrations), the US president has ceased to be accountable to the law. He can no longer be held accountable for the fact that his actions do not comply with the US Constitution. Since then, we have not yet had a president who, if we were to observe the law, would not be subject to an impeachment procedure (dismissal).

All of our leaders since the beginning of this century have violated the constitution in all possible ways. Many of the provisions included in the basic law, such as the so-called Bill of Rights, have been declared inactive by the executive. Not by the legislature - it can complement and correct the constitution, but the executive. The provisions of the basic law were crossed out by simple presidential declarations. It turns out that the president assumes the role of a sort of Roman emperor, who declares himself no longer bound by the constitution. And whatever he wishes, everything goes without a hitch, without a hitch.

- Let us touch upon such issues as the legality of the National Security Agency’s programs for the secret supervision of citizens, the surveillance program called PRISM, the use of drones to eliminate persons suspected of terrorism, including American citizens.

- These are individual cases of violation of the constitution. It gives a person the right to privacy, his private space can not be subjected to the invasion of others. The exceptions are those cases where a person is suspected of having committed a crime and the court allowed him to follow him.

But now everyone in the world can be eavesdropped and peeped - this is something like carpet bombing when it covers everyone. Not only Americans, but also Russians, and residents of Western Europe.

But you can't suspect everyone. We must go to court and say: "We suspect such a particular person in such a specific criminal act, we would like to receive a court order to listen to his phone, view his e-mail and so on." But what does the US National Security Agency want to do instead like the East German "Stasi" office? It wants to listen to all citizens, whatever means of communication they use. This is against the constitution.

The old rule protecting a person from arrest is also violated - habeas corpus. According to this rule, the government cannot simply arrest a person and hold him in prison for an indefinite amount of time. If a person is arrested, within a short period of time representatives of the state should come to court and explain why they should be kept behind bars. A judge may release him on bail or without bail, but in any case he must be inside the judicial system, and the rules of procedure must be respected with him.

From the people of Bush, and then Obama, we heard the following: “No, we don’t have to respect habeas corpus. We can take anyone we want anywhere in the world and throw this person in jail. And tell no one where this person is and what evidence against him. " But this is a violation! However, Obama went further than Bush. He can "not only throw a person in jail, but also kill him - just on suspicion that he has done something bad." This president says: I do not need special evidence against you, because there is no legal process. I'll just send the "flying killer" —the drone or Hellfire rocket — and destroy you.

His people make lists of the people they are about to kill. All this - the offense punishable by impeachment. If Reagan, Nixon or Carter, or even Bill Clinton had fallen on this, they would be immediately impeached.

“But then, did Bill Clinton be impeached?”

- Yes, he was condemned by the House of Representatives for having sex with a young woman, but the Senate did not support this accusation. This is what happens in the US: you can arrest people without a warrant, kill them - and nothing will happen. But in no case can not start an affair with a young woman. And Congress will see to it that this does not happen.

- It seems that Congress neglects a number of its powers to supervise the executive branch. He refused the duty to give the president permission to use military force. What is it, why does the famous American system of checks and balances fail? Or does the Obama administration, following the Bush administration, simply very broadly understand the powers that these administrations gave Congress earlier?

- Congress refuses its authority because it is simply intimidated. He is afraid of. The so-called war on terror gave the executive power the opportunity to simply push the other two branches of power behind unnecessary.

As if in the courts or in Congress they are trying to object to the executive, they are immediately accused of complicity with terrorism. If the congressman does not allow so-called anti-terrorism laws to keep Americans safe, then he is immediately accused of being on the side of the terrorists. And if the judge prohibits the use of any of the measures, they simply find the judge a rank higher, which makes the decision they need.

In the US, there are three levels of judges - district judges, district, federal judges. And all these ministers of the law have ambitions, they all want to move higher - to the next level. If you persist, lobbyists of this or that illegal practice will simply find a superior judge, and you will remain without promotion. And the judges learned: if you want to go upstairs, do what the executive branch wants. So now we are seeing how easy it turned out for the executive to wipe two other branches off the political map.

- Judges in the United States are appointed by the president, and then their candidacies are approved by Congress. Many of these judges have political ambitions. And obedience usually comes with a reward. In your statement on the Internet, you report lawyers by the name of John Yu and Jay Scott Beibi. These lawyers received warm offices because, as you write, “they gave the democratically elected president to become Caesar” - provided a legal justification for some dubious Bush initiatives . John Yu became a professor at the University of California at Berkeley. Baibi became a federal judge in the appellate court in the Ninth Circuit. Does it mean that those who play this game receive awards?

- Yes, these people argued that the President of the United States could not torture anyone in the United States, that these actions do not fall under American law or the Geneva Convention. By their actions, they untied the hands of the government to create torture prisons. And both of them awarded. But those who opposed these decisions or made them publicly known — all these people are allegedly persecuted by law.

- Yes, and here you can remember Snowden. Now he is likely to receive temporary asylum in Russia. How do you feel about this reversal of the roles of the Cold War? After all, once, on the contrary, the USA gave asylum to those who disagree, and the USSR sought their extradition. How did it happen that everything became the other way around?

“I think it happened because home-grown Nazis appeared in the United States, called neo-cons there.” I think they would have perfectly survived in the highest echelons of power of the Third Reich, in Nazi Germany. They came up with such a theory that after the collapse of socialism, the United States in the world simply has no alternative. This situation supposedly makes the United States a necessary country around the world, a nation without which the world simply will not do. That is why this country has the right to impose its will on the whole world. Meanwhile, in the former Soviet Union, a completely different process began. There, after all the troubles of the Soviet people decided that they were tired of tyranny and irresponsible government. The Russians decided to become different. And so it turns out that today the United States is a tyrannical country, and Russia is trying to be guided by the law.

There was such a Hungarian cardinal Jozsef Mindszenty. He was put in prison under the fascist government, and when the Communists came to power in Hungary, he was again arrested as the head of the Catholic Church of Hungary and sentenced to him in 1949-year — life imprisonment. He was liberated by the Hungarian revolution of 1956. When the revolution was suppressed with the help of Soviet troops, Mindszenty took refuge in the territory of the US embassy in Budapest and sought refuge there, in the manner of Assange in our time. So, Mindszenty lived in this embassy for 15 for years, because the pro-Soviet government of Hungary did not allow him to freely travel to a country that was ready to shelter him. He left only in 1971. Now the US is doing the same with Julian Assange and with Edward Snowden. So where is the world evil now? Now it turned out to be in Washington.

- But how can you still talk about a coup in the United States? After all, there they elect a president - every four years, a congress - every two years. On what level did the American political system slip? Why does the end result look more like a usurpation than a responsible government?

- Under Stalin, people also voted and elected someone there. But the government and the CPSU from this did not become responsible to the people. In the US, the same thing happens today - the state system is not responsible to the citizens. There are six powerful groups that express the interests of powerful lobbies - the military-industrial complex, agribusiness, and others. They write the laws that the congress simply approves, and the president signs them, giving them the force of law.

Ctrl Enter
Noticed oshЫbku Highlight text and press. Ctrl + Enter
We are
A great interview with Sergey Lavrov: about Ukraine, Obama and IranWhat you didn't want to know about England
Military Reviewin Yandex News
Military Reviewin Google News
28 comments
Information
Dear reader, to leave comments on the publication, you must to register.