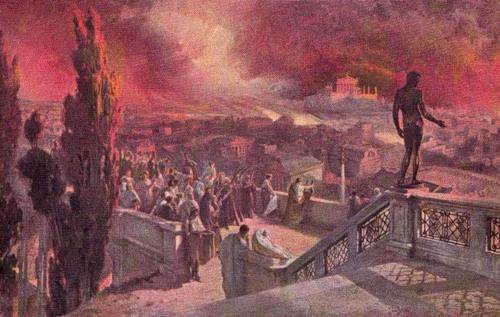 There is still no satisfactory explanation for this monstrous fire that destroyed Rome in 64 BC. What happened on that unfortunate night? It all started on the night of July 18-19 and lasted several days. During this time, 40000 residential buildings, 132 villas were burned down, as well as part of the imperial palace. But most of all it is a pity for the ancient temples and sanctuaries destroyed by fire. Emperor Nero himself was outside Rome at that time, but upon learning of the tragedy that had happened, he hastily returned to Rome, where he began organizing camps for the city residents who suffered from the fire. The emperor tried to keep grain prices low in order to avoid all kinds of unrest. In the settlements themselves, he monitored the distribution of food among the fire victims. But not everything went so smoothly. The morale of the Romans was very low, they were all suppressed by the catastrophe, performed atoning rites, sought to touch the angry gods.

The very causes of the fire are unclear. The most common version to this day is that the fire was caused by an accidental fire, but due to unsuccessful planning and poor safety measures, it turned into hell. Rome itself was chaotically settled on seven hills and, accordingly, turned into an overpopulated metropolis. But at that time there was a housing speculation, and the prices were so exorbitant that people who did not have the opportunity to purchase such housing were heaped in in closely-built neighborhoods. It becomes clear that in such conditions any fire can grow very rapidly between houses on several floors, standing side by side along narrow streets. The reasons for the frequent fires often became the fact that people cooked food on open fires, and the rooms were heated by braziers with hot coals.

Was Nero involved in that terrible fire? As you know, the emperor had an unbalanced character, he was always considered a tyrant and tyrant, and a long list of his atrocities undoubtedly gave rise to suspicion. Nero's hobby gave impetus to one of the rumors: he was looking for inspiration and an excuse to perform his song about the burning of Troy. It is believed that the fire cleared the place for the construction of the Golden Palace conceived by Neuron. Almost nothing has survived from him, but the emperor then blamed the tragedy on the Christians who aroused universal hostility. Of course, it was very easy to blame them for arson, because these few and poor people were considered strangers in Rome. It was also beneficial for Nero to start systematic persecution of Christians, and this led to the strengthening of his own authority, since the people's discontent was directed to a safe channel. As could be expected, in such cases, mass arrests were made, and supporters of the new religion were handed over to predators in the circus arenas, burned, and executed in full view of the people. The catastrophe caused serious material damage to the emperor himself: the palace was badly damaged, and only ruins remained of the Circus Maximus. After the death of Nero, the Roman emperors very seriously followed the planning of buildings and the city as a whole and, surprisingly, it was during this period that the first prototypes of modern fire shops began to appear in Rome.