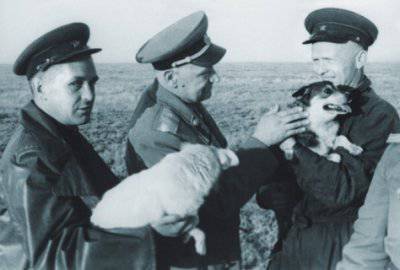 World-class scientist, creator of a new direction, meticulous and meticulous system analyst. Diversified: he studied at the ameliorator, retrained as a medic. At the same time, he mastered vocals at the Tashkent Conservatory, and even sang at the Alisher Navoi State Academic Grand Theater. A student wrote his dissertation, but did not defend.


In November 1941, Vladimir Yazdovsky graduated from the Medical Institute and, as the head of the course, threw a cry: all to the front. He served first in the reserve, then in the assault air regiment, treated, performed operations, returned pilots to service, and often provided assistance to the local population. Then a divisional doctor - in the Baltic States, in Ukraine, in the Carpathian region. And it was still pulling for research: how was it in the cockpit in an extreme situation?

ON THE JOINT OF TWO SCIENCES

The combination of engineering and medical skills cost him a call to Moscow, at a research institute near the Dynamo metro station. From there - to the Tupolev Design Bureau. There he was unyielding, responding to the cry of the chief: "Until you fix it in the cockpit, I won’t sign the acceptance certificate." At the same time he specified how to improve it. And Andrei Nikolaevich “took revenge”: he told the Queen that there was such a specialist he was looking for - both a techie and a doctor. A brief meeting took place in Petrovsky Park, Yazdovsky was taken into his own institute aviation medicine, but on a closed topic.

On account of Vladimir Ivanovich more than 270 scientific works, but only with the filing of Academician Anatoly Blagonravov, he decided to summarize the results of flight studies of biological objects. He became a doctor of science. I did not go further.

Being a polyglot (like his father, who knew 10 languages), he eagerly read foreign publications on his subject. And laid the foundation for collections of translated articles and works of domestic authors on space biology and medicine.

But the main thing: he combined the ability of theorist, organizer and practice. Back in 1949, he developed the scientific doctrine of space biology and medicine, two years later supervised the entire program of preparation and altitude testing of biological objects, for which he was awarded the State Prize 1952 of the year. According to the major general of the medical service, Vladimir Ponomarenko, in the past he was the head of the research and testing institute of the Ministry of Defense of the Russian Federation, the medical branch has never received such a state task. In fact, Yazdovsky provided a safe breakthrough for man in space. At the same time, he organized a study of the behavior of living beings in microgravity conditions, the introduction of a previously unknown system of medical support for astronauts. In this, our scientists had no equal.

DOGS BROUGHT THE USSR IN SPACE

According to the stories of Victor Yazdovsky, the father often brought dogs to the cottage, they frolicked, as if understanding: not everyone would return to the ground. According to Professor Rafael Vartbaronov, for the first time in the world his teacher substantiated the high adaptability of simple mongrels to extreme situations, created a system of their preparation for a phased life at different heights. Proved: dogs are more patient, more reliable than monkeys.

The Order of the Red Star was given by the head of the institute for the great Like, the world's first living creature outside the Earth. And the Order of Lenin, as the crown of the ten-year program of biological experiments on geophysical rockets and satellite ships, is for ensuring the successful flight of an astronaut No. 1. It is noteworthy that even half a century later, “Noah's Arks” (as our apparatus with mice, guinea pigs, flies, plants, bacteria, dogs called abroad) already under the name “Bion” continue to provide valuable data on the effect of flight factors on living organisms.

Who knows now that German Titov has lost almost two kilograms after the flight, and his body temperature has risen to 37,6 degrees. The main thing then was proved for science and the prospects of cosmonautics: the astronaut is able to maintain working capacity for a day or more.

According to his son, Vladimir Ivanovich had the will, he paid no attention to trifles. But if it was a matter of principle, then he said what he thought. It happened when the Deputy Commander-in-Chief of the Air Force, Marshal Sergey Rudenko, questioned the tasks being solved by the Institute. Required that all work was carried out only for the Air Force. “A departmental confusion was created, which terribly interfered with the work of our team. We did not feel the help of the Air Force command and medical service, on the contrary, there were only interferences, ”Yazdovsky himself emphasized. As a result, the leadership of the Air Force insisted on the transfer of space biology and medicine from the Ministry of Defense to another department. This is how the Institute of Biomedical Problems appeared. “As a result, we did not get consolidation, but disengagement of forces ... performance fell,” the scientist bitterly stated.

Due to a number of factors, the haste in the implementation of the most important programs has increased (the costs are not only lagging behind, but also in the tragic events at the turn of the 60's – 70's). Yazdovskiy leaves the institute, to whom he gave 17 years. Work in the new IBMP - also a deputy in science - did not bring joy. There was also a strong parallelism in the training of astronauts. The deputy head of the institute with his uncompromising character defended the interests of the cause, the science of a new and promising. Perhaps that is why six submissions to the general’s post were rejected.

But Colonel Yazdovsky is rightfully the world's recognized founder and commander-in-chief of space biology and medicine, the founder of many methods, forms of research and prevention, the designer of eco-and biosystems on space ships and stations. The name of the hero of the day will shine on star maps, and the institute at Dynamo will force you to talk about yourself.

Ctrl Enter
Noticed oshЫbku Highlight text and press. Ctrl + Enter
We are
Diplomats of the People's Commissariat of Defense: on the eve and during the warSoviet aces on Lend-Lease fighters. Part of 2. "Tomahawks" and "Kittyhawks"
Military Reviewin Yandex News
Military Reviewin Google News
6 comments
Information
Dear reader, to leave comments on the publication, you must to register.