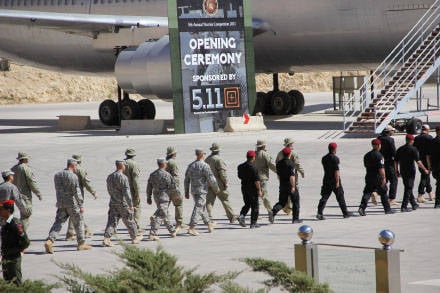 King Abdullah of Jordan 2 is a Special Forces soldier himself in the past, continuing to maintain excellent physical and combat form. During the competition, nothing prevented him, personally piloting a helicopter, to land at the shooting range, to successfully shoot out from his favorite caliber 45 caliber and, wishing all participants good luck, to leave just as he appeared. That is why in Jordan this tournament attaches great importance, and it is always held at the highest level. Every year, active special forces units from around the world take part in the competition. This year 36 teams from 19 countries participated in the competition. The composition of the team 7 people: 5 "attack aircraft" and 2 "sniper". To the disappointment of both the participants and the organizers, not all the strongest units could come.

The first thing worth noting is the KASOTC center itself. The scale of this building and the scope with which its creators approached the business are impressive. On the territory of the center there are about 50 different shooting ranges. A dozen educational cities have been built inside the complex. At any of the facilities of the training ground, you can perform exercises with live shooting and the use of almost any special equipment. The complex is adapted to work both day and night. It is possible to carry out various training tasks using helicopters, and aviation also has the ability to use combat weapon. All facilities of the complex are equipped with the latest technology. At all the frontiers - electronic scoreboards, showing targets - walking to targets, to see the results, is no longer relevant ... At a distance from the main objects, there are positions for firing at long distances, representing the most difficult sniper range.

Russia has not previously participated in these competitions. Russia was represented by a group of veterans of the Russian special forces. 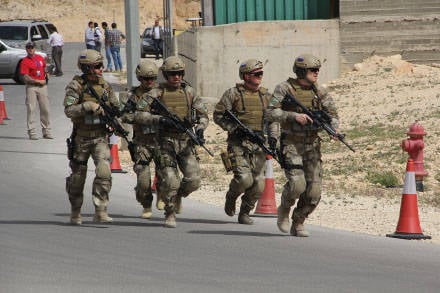 Reserve Officer (Veteran) Taras Shevchenko:
- We had a goal - to see what others can do and to show what employees of Russian special forces are capable of (even if they are veterans). And we have achieved this goal.

By the way, the Russians came to the competition without a main weapon, with which you can work in KASOTC. Weapons could be rented on site. For the minimum time, the Russians have mastered the work with the M4 A1 carbine. Speaking of weapons, it is necessary to note the excellent quality of foreign samples. I really liked the emka - a great carbine, gentle recoil, very balanced. Pistols that were provided to them at the time of the competition, also left the best impression. All participants were especially impressed by the weapons presented by the Swiss and Dutch manufacturers - SigSauer and Fenix. 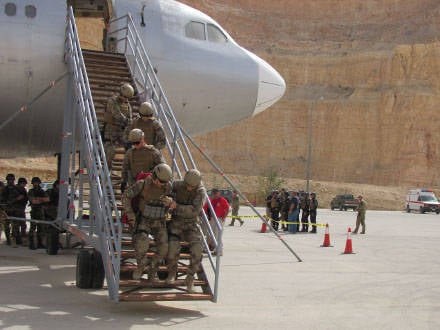 But with the equipment and equipment, the situation was diametrically opposite. If at the international championships, Russian soldiers usually look with surprise at the luxurious uniform and equipment of foreign teams, then this time the whole world in the literal sense of the word looked with envy at the Russian special forces, who came to the competitions equipped as super-soldiers from fantastic films. In the Russian Internet, there has long been a term for this level of equipment - “jagernauts” (a term taken from a computer game and used to refer to a fighter armed with the most powerful weapon and the heaviest armor). The Russians really had all the best - the latest camouflage and tactical equipment, the most modern body armor and splinterproof helmets. And one of the main wonders brought from Russia was the sniper rifle, from which ours fired - the famous ORSIS T-5000 under the caliber 338.

Most of the tournament exercises were associated with increased endurance and strength training. Many accelerated movements with access to the position and subsequent combat shooting. The entire competition program was designed for 9 days. The competitions themselves lasted 4 days. 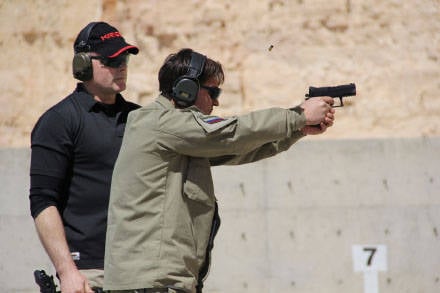 1 day:
1. Cross 5 km in full gear (carbine, pistol, protective equipment: helmet, body armor 5 Art., Flashlight, knife, assault suit, boots).
2. Throw in 150 m and shoot a submachine gun on 300 m, then quickly move to another shooting range and shoot at the appearing targets. Finish the whole group. For each miss, a penalty of 10 seconds. The best team is determined by time.
3. High-speed climb to the 8 floor and shooting at an angle of 45 – 60 degrees.
4. Storming the building with live firing.
5. Shooting from different positions after the obstacle course.
2 day:
1. Assault aircraft shooting marker marker ammunition.
2. Fighting in urban conditions with live shooting and evacuation (on 700 – 1000 m) of the wounded.
3. The release of hostages at night with shooting.
4. Night fight in the building with marker weapons.
3 day:
Royal Marathon 10 km (exercise developed personally by King Abdullah). March on mountainous terrain with 5 firing lines: sniper 500 – 700 m, submachine gun 300 m, pistol 20 – 40 m, submachine gun with an angle up to 60 degrees on 200 – 250 m, pistol of large caliber from different positions.
4 day:
1. Fighting in the city with shooting at appearing targets as part of a unit.
2. Pistol duel. 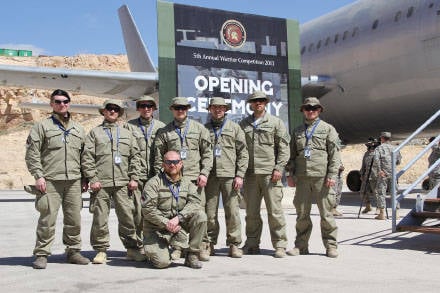 In 2013, the undisputed leaders were employees of Chinese special forces.

Sergey Vasilenko, a reserve colonel in the A management of the CSN FSB of Russia:

- Accidentally or not, most of the exercises this year were associated with increased endurance and strength training. And it’s useless to compete with the Chinese on the part of PHYZ. The Chinese have an average age of 23 participants of the year, we have 44. A sniper in general is already 50! On the 10-kilometer distance passing through the mountains, they just could not keep up. We ran 1 an hour 10 minutes, they are 42 minutes! At the same time, the Chinese sacrificed the quality of the exercise for the sake of speed. In the event of a miss, the employee simply threw down his weapon and ran the penalty circles, compensating for the speed and endurance of failure in shooting. Someone jokingly called the Chinese - “robots”. But the winners, as they say, are not judged.

The results of the exercises were evaluated not by tactical execution, but by speed, for penalties, penalty time was added. In general, with regard to the load, then this competition is a real test of endurance. The Russians first assault on the aircraft began in the morning 9. The final exercise of the first day began closer to 2 hours of the night! And so every day! The participants managed to sleep on 4 – 5 hours,
not more. 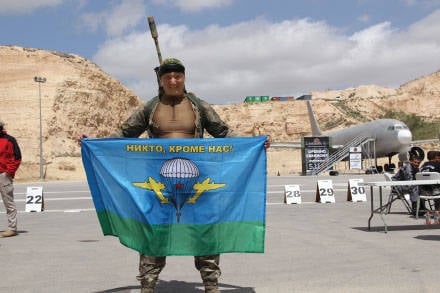 Reserve Officer (Veteran) Taras Shevchenko:
- During the assault, the 4-storey building needed to be cleaned up and the “wounded” taken out. High-rise buildings on all floors are targets that need to be hit with live ammunition. The “wounded” itself is a 90-kilogram something with a variable center of gravity. You can only carry it on yourself. Our fighter (veteran) took it upon himself and ran with him about 800 meters, and we covered him with a tactical group. A senior US Army officer then came to look for our member who was dragging the “wounded man” to personally shake hands with him. He said that he knew that the Russian men were strong, but he did not know so much. Many teams could hardly lift this "body" together.

Sergey Vasilenko, a reserve colonel in the A management of the CSN FSB of Russia:

- After the storming of the aircraft, the French asked the instructor: “What did the Russians do on the plane for more than two minutes, when the average for the Chinese 1 is a minute 20 seconds? The task is to find and neutralize the 20 terrorists. ” To which the instructor replied: "The Russians did not do the exercise - they stormed the plane." We actually went into the plane and all of it, including the luggage compartment, cleaned out. We were one of the few teams who really worked out the situation.

No less interesting was the sniper duel. When the participants moved to the landfill, they took away all the equipment without exception. No range finders, ballistic calculators, even phones. Allowed to leave only a primitive observation tube (without a net), the weapon itself, optical sights and a notebook with a pencil for calculations. In the conditions of absolute uncertainty of the target situation, the second number needed to find targets in 2 minutes and give the sniper all the necessary information. The shooter must hit 2 targets in 5 minutes, maximum 6 shots.

This is where the true mastery of sniper pairs was revealed. 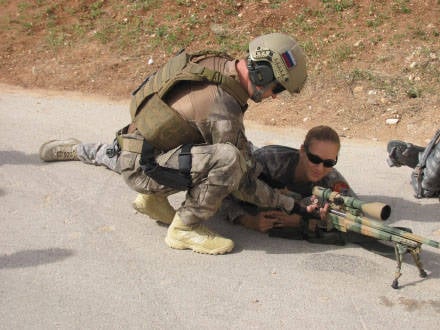 It should be noted that the situation at the tournament was very friendly. Nobody was sitting around anyone, no crooked views. Russians from the first minutes found a common language with representatives of many divisions, and often the participants of the opposing team approached and helped prepare for the upcoming exercise.

As the participants of the Russian national team say, they didn’t see anything special about tactics and practicing tasks at these competitions. I was amazed only by the material base and the opportunities that she opened up for working out various situations. For example, elements of firing from a carbine with large angles turned out to be very interesting - in Russia there are simply no landfills with such conditions. First of all, the complexity is the calculation of the flight path of the bullet. After all, the bullet itself is light, the shooting distances are large, about 300 meters, targets the size of a telephone.

Of the exercises, I remember one thing called “Kogan Alley”, the essence of which is the battle in the city. The group moves around the real city, destroying all the appearing targets. Goals appear sometimes in fairly unexpected places, at uncomfortable angles. 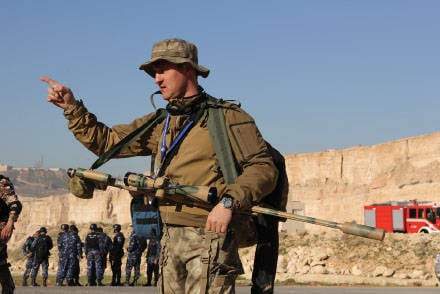 We can not say about the level of organization of competitions. Little facts. The results of the group were known a minute after the finish of the last team. A booklet with photos was ready five minutes after the end of the competition.

This visit will certainly not be the last for the Russians. It is already clear that the potential of Russian special forces allows them to claim the highest places on the podium.