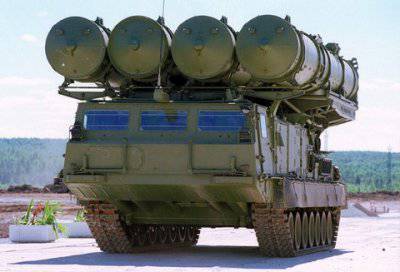 C-300 enterprises are engaged in the production of the C-400 complex, and the Antey-2500, the army version of the legendary system, is offered to foreign customers.


The anti-aircraft missile system (ZRS) C-300ВМ ("Antey-2500") will be the basis of Venezuelan air defense. The strategic operational command (Comando Estrategico Operacional - CEO) of the National Armed Forces plans to create six air defense brigades. In each brigade there will be several groups of fire weapons and the C-300ВМ control division.

Venezuela became the first foreign buyer "Anteev". Next in line is Turkey. C-300BM is participating in the tender for the supply of long-range air defense systems, along with the US Patriot air defense missile system, and the C-300 clone from China. Earlier, Russia offered Iran, to replace the annoying White House, C-300, with "Antey-2500", within the framework of an already concluded contract.

The C-300 PMU1 and Antey-2500 (C-300ВМ) complexes have similar characteristics. In fact, the "Antey" is an improved C-300 tracked modification, which was designed specifically for military air defense and was not intended for overseas deliveries. C-300BM is capable of striking airplanes, drones, ballistic and cruise missiles, flying at speeds up to 16200 km / h, within 200 radius, at altitudes from 20 meters to 30 kilometers. The transfer time of the on-duty ZRS to combat readiness is only 40 s, preparation of the rocket for launch takes no more than 7,5 s.

The main elements of the C-300B. Photo © Rosinformburo / A. Sokolov There is evidence that the Ministry of Defense intends to equip this system with four anti-aircraft missile brigades.

But why, Russia decided to sell overseas air defense system, created exclusively for domestic use.

A source in the defense industry agency suggests that this may be due to the re-equipment of the Russian army with the C-400 Triumph complexes. Enterprises producing C-300 are engaged in the production of new products, and to foreign customers are offering an army version of the famous system, which is assembled at other factories.

Ctrl Enter
Noticed oshЫbku Highlight text and press. Ctrl + Enter
We are
The first buyer of C-400 "Triumph" was ChinaZRK C-200 rust in the woods near Moscow
Military Reviewin Yandex News
Military Reviewin Google News
46 comments
Information
Dear reader, to leave comments on the publication, you must sign in.