Zimmerman needs a new gun, or America has split in two

July 29 2013
117
Recently, a US civil patrol George Zimmerman, a jury acquitted of a high-profile murder case of black teenager Trayvon Martin. The gun, from which the teenager was shot, was among the material evidence, therefore, according to the lawyer of the acquitted, Mr. Zimmerman needs a new weapon. Now the Ohio State Political Assistance Committee is collecting donations for the lonely “warrior”. 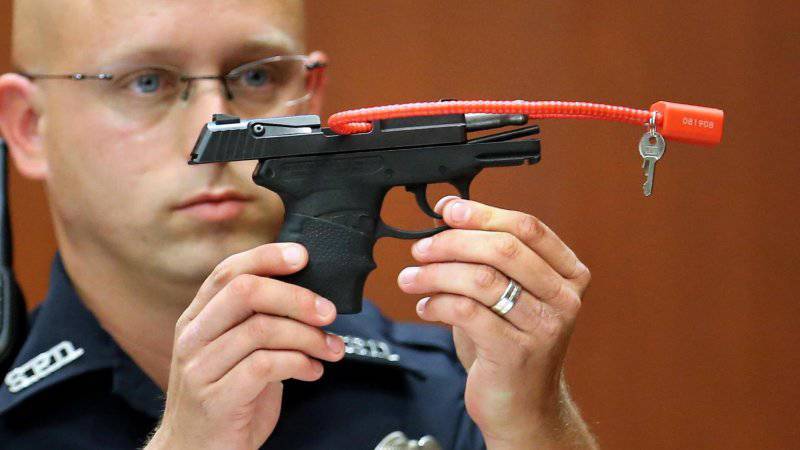 Patrol lawyer Mark O'Mara said that his client needed the weapon more than ever, reports "RT". Employees of the Political Aid Committee created the Zimmerman Aid Foundation, urging people to chip in on 100, 50 or 25 dollars for the sake of George’s security.

While some are thrown off their arms, thousands of Americans, different from the shooter in skin color, took to the streets to protest against Zimmerman’s acquittal. In New York, protesters chanted: “There is no justice — there is no peace!” The mother of the murdered teenager said at the rally: “The Lord heals my heart. But when I see that so many people have gathered, he reminds me that we still have a lot to do. ”

Many consider the decision of the court racist, notes the correspondent of "RT" Nicholas Sánchez O'Donovan.

As for the pistol and the security issue, it is known from the American press that Zimmerman and his parents are constantly threatened. Zimmerman himself, who continues to be a public patrol, wears a bullet-proof vest outside. "Lenta.ru" With reference to ABC News, reports that Lori Tenkel further reported on threats to the public. The fact is that her phone number differs from the Zimmerman number by one digit. Someone mistakenly posted it on the Internet. On one day, Tankel received more threatening 80 calls.

British Broadcasting Company "BBC" reports that George Zimmerman’s brother, Robert, announced that he had received numerous threats through social networks and noted that George would have to live the rest of his life, “constantly looking over his shoulder.” 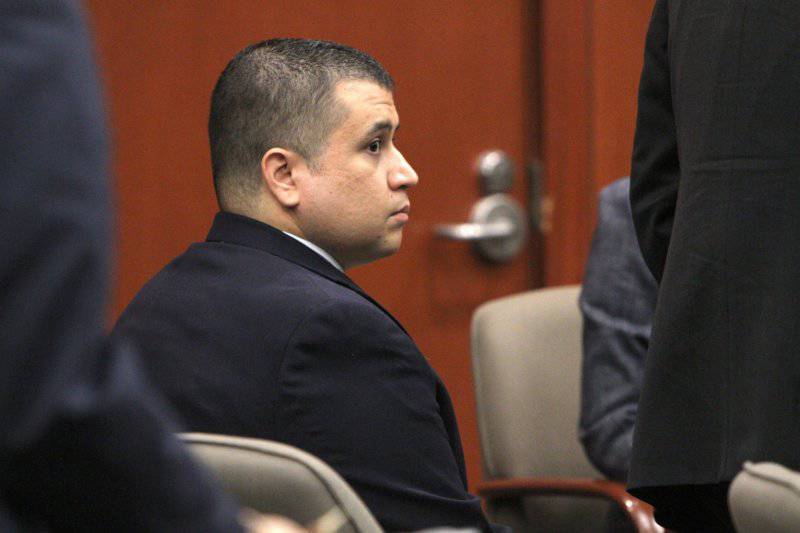 Patrol friend Jorge Rodriguez said in an interview with Reuters that he does not understand the angry reaction to the acquittal sentence: “Everyone wanted justice, and they got it. Everyone wanted George to be arrested, they got it too. Each demanded that he stand trial, which was done. Everyone demanded a fair trial, and this was also granted to them. ” Rodriguez says: “There was no racism here. It was about a community that suffered from assaults and robberies, and only one person dared to challenge all this. The state should have rewarded him, but instead they arranged a trial for him. ”

According to "BBC", Barack Obama called the death of Treyvon a tragedy for America, but noted that the United States is "a law-abiding country, and the jury said its word." According to the president, residents of the country should show respect for the feelings of Martin’s family, which called for a “restrained understanding” of what happened.

“We have to ask ourselves if we are doing everything in our power to stop a wave of violence with the use of firearms that takes too many lives across the country almost every day. (...) This is a task that faces us all as citizens of a country. Only in this way can we honor the memory of Treyvon Martin, ”said Obama.

Later, the US Attorney General made his point. Eric Holder stated that he had doubts about the court decision. “The Ministry of Justice shares your concerns. I myself share your concern, ”the prosecutor quotes. "BBC". These words, Holder said at a speech in front of a group of college graduates for black women in Washington.

E. Holder also expressed the hope that the country would take advantage of this opportunity to "honestly discuss the complex and emotionally loaded issues that raised this matter."

Regarding the murder of the 17-year-old, during the interrogation at the Sanford police station, as indicated "Lenta.ru" with links to various foreign sources, J. Zimmerman said that Martin had attacked him, and he had to shoot in self-defense. Zimmerman added that during a fight, Martin hit him in the face, broke his nose, then jumped on top of him and hit his head on the pavement. ABC News cites a photo taken after the murder of Martin. The photo shows the blood on the back of the patrol. After the interrogation, the patrol was released: the police described his actions as “inappropriate murder committed to prevent a wrongful act.”

It is known that the radical black party “New Black Panthers” offered ten thousand dollars for the capture of J. Zimmerman. The leader of the "panther" Michael Muhammad was asked whether this step is not an incitement to violence, to which he replied: "An eye for an eye, a tooth for a tooth." 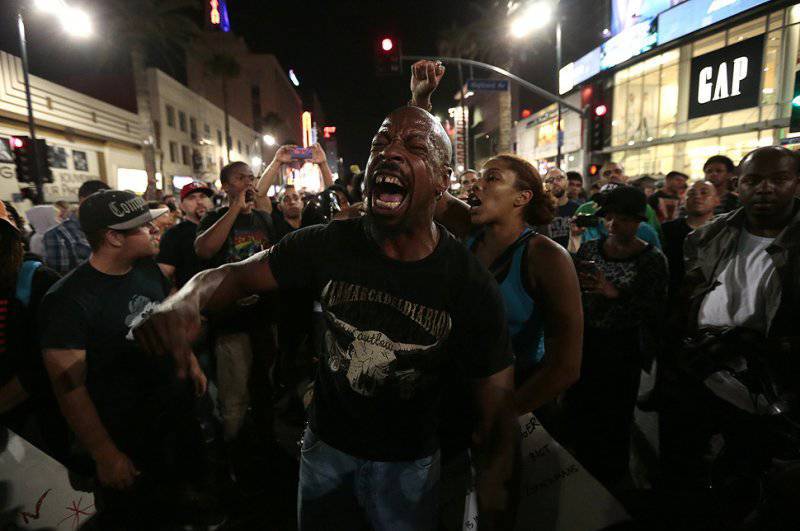 Sergey Duz ("Voice of Russia") notes that public opinion has split in the US. The reason for this is B. Obama’s support of the African American community, who saw signs of racism in justifying the white patrol. S. Douz quotes the following statement by the American president: “In this country, you can find a few African-Americans who have not had to experience how a guard walks on the heels of the store. I also came across this. ” “This experience explains why the African-American community reacted so painfully to the events in Florida,” said Obama. - It is very important to understand that the pain inflicted once does not go anywhere. In place of Treyvon Martin 35 years ago, I could have been myself. ”

And then the US Department of Justice announced that it would bring new charges against the civil patrol. The correspondent of Voice of Russia believes that there is pressure on the court, and this contradicts both the letter of the law and the spirit of the US political system.

Director of the Institute for Strategic Planning and Forecasting, Researcher at the Institute of World Economy and International Relations Alexander Gusev says:

“The situation that has developed in the States in connection with the death of a teenager, creates difficulties not only procedural, but also political. Obama is the first African-American president. What can this lead to? The acquittal will be reviewed. Presidential intervention can set a precedent.

The African American community in the US is hopeful for influence from Obama. After all, it was no coincidence that they voted for Obama to protect their interests. Now this situation has arisen. This is a trial balloon actually. Obama has a second term. The third term will not be. And he needs in the eyes of African Americans to establish himself as their president. He must stake his place in the American stories. From this point of view, his intervention is fully justified. ”

If you look at it from the other side, the discrimination pendulum “swung in the opposite direction”. Today, in the States, it is not the black that is discriminated, but the white population, the correspondent notes. For example, American universities still take into account the ethnic origin of applicants - and on a par with grades and extracurricular activities. According to surveys, 58% of white Americans aged 18-24 years believe that discrimination against whites has become as serious a problem as discrimination against ethnic minorities. As a sociological poll of Stanford University showed, this feeling is especially strong among Republicans and Evangelical Christians from the southern states of the country. 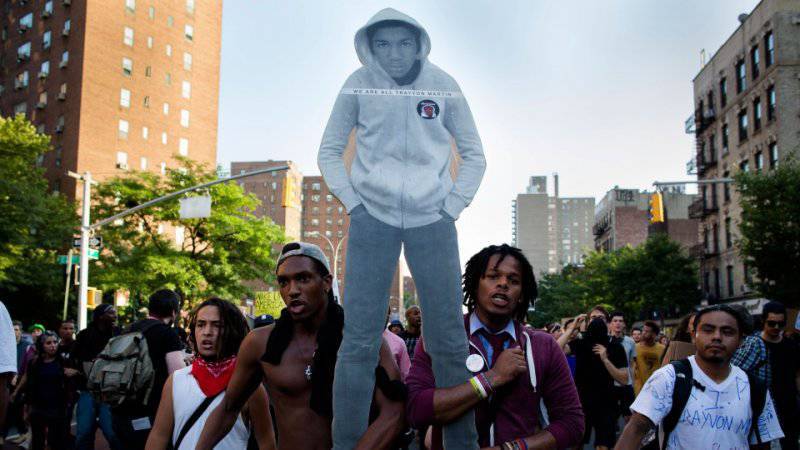 In the area of ​​employment, the number of racial discrimination lawsuits that sued non-blacks, namely white employees, increased from 9,7% of the total number in 2002 to almost 13% in 2011 (data from the Equal Opportunity Commission). S. Duz summarizes: there is an opinion that “white” racism in the USA has been replaced by “black”.

Why did the president say these words? It seems that the leader of the state not only expressed personal feelings and solidarity with African Americans, but also thought about the rating, the percentage, the domestic policy, and finally, his own electorate. It is not easy to find a balance between all these components. And it's hard to say how much Obama's speech influenced the attorney general of Holder. It is just as difficult to say where, in practice, there is a border between different branches of government, and whether it exists at all.

If we bear in mind the so-called “trust rating”, the president clearly tried to maintain the rating balance between “black” and “white”. However, expressing his own feelings, he still put a heavier weight on the “black” bowl. Emotions always weigh more than dry phrases about a “law-abiding country” and a jury trial that said “their word”. Therefore, the percentage given to Obama by the “whites” will soon decrease. As for the percent of trust from the “blacks”, then if the Prosecutor General Holder fails to draw Zimmerman to justice, African Americans will be disappointed in Obama. In short, the president was between two fires. And he will not be able to play according to the bad principle “both ours and yours”.

And what about George Zimmerman? And he continues to carry out his civil service.

How 23 transmitted July "BBC"This volunteer saved a family of four from an accidented car.

The accident occurred in Sanford about a kilometer from the place where Zimmerman shot Treyvon Martin in February 2012 of the year. By the arrival of the police, the patrolman, along with another person, helped the victims to get out of the overturned SUV.

Observed and commented on Oleg Chuvakin
- especially for topwar.ru
Ctrl Enter
Noticed oshЫbku Highlight text and press. Ctrl + Enter
We are
Geopolitical mosaic: American pilots dropped bombs on the eighth wonder of the world, and American Thinker journalist believes that tyrant Obama has no right to criticize PutinGeopolitical mosaic: in the West they think that Putin will restore the USSR, and in Germany the fascists clashed with anti-fascists
Military Reviewin Yandex News
Military Reviewin Google News
117 comments
Information
Dear reader, to leave comments on the publication, you must sign in.