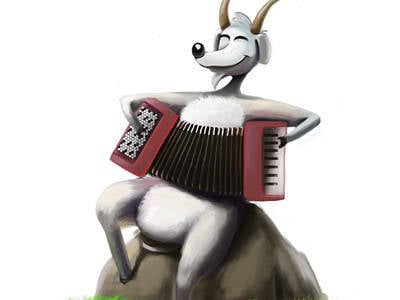 My neighbor has a goat. An excellent goat: it gives milk regularly, yells in moderation, loves pochrumkat twigs and scratch the horns on the fence. So I dare say that this beast does not need a button accordion. Even the production of a well-known company. She just has other values. Not bad and not good, but ordinary goats. We will not blame the goat for this - no arguing against nature. And such a given should be taken as a given - calmly and rationally.


It is a pity, but a person often turns out to be dumber than a goat. And precisely because smarter. Dialectics, s. It is common for people to imagine that values ​​themselves are spread around the world by a kind of cultural wind and are themselves assimilated by everyone, regardless of gender, tribe, habits, customs, religion and stories.

By and large, we face one of the worst illusions of Homo sapiens. Mirages and illusions in axiopolitics (I. Andrushkevich’s term) play a role weapons, which can destroy the enemy power without resorting to atomic or biological shock. If we continue the comparison, the goat is offered instead of cabbage stumps button accordion and they are required to eat. I am afraid that in such a situation the goat will not only stop milking, but will also throw the horns of the legs.

In axiopolitics, there are several ways to strangle the hated public-state system of the enemy: to cross false values ​​with the values ​​of the enemy; replace the aboriginal values ​​with the new ones; mix true values, taken from culture-xenia, with genuine values ​​from the autochthonous cultural sphere - as a result cultural schizophrenia arises; inject the poison of "monetary fetishism."

In reality, the methods and methods are combined. An axio-political war is always complex and multi-path and lasts a long time (not a year, and not ten years!).

The entire nation invariably acts as a creator of values, but the elite is their advocate and popularizer. The whole nation as a whole does not have the conditions to constantly think only of the highest. Someone must graze sheep, mine coal, plow the land and bake bread.

“Zhelyabov told the tragicomic history of his populism. He went to the village, wanted to enlighten her, to throw the best seeds into the peasant soul; and in order to get closer to her, he began to work hard for the peasants. He worked on the 16 hours in the field, and, returning, he felt one need to stretch out, straighten his tired arms or back, and nothing more; not a single thought entered his head ... "(Quoted from: Nesterov F. F. Connection of Times. - M .: Young Guard, 1980.).

Wonderful example! And he explains a lot. The people breathe their own values, especially without thinking about them. He works. Free time at least. But the elite, set aside from hard work, have leisure, which it is obliged to use to protect values. Leisure of the elite is not intended for Kurshawel gatherings, but for the execution of the main axiopolitical duty. But ... It is common for elite to think that it has become an elite by virtue of its particularly outstanding abilities and, in the end, time should not be given to the discharge of duty, but the realization of personal rights. The elite forgets that the people singled it out, fostered it and endowed it with rights.

However, forgetfulness is characteristic of the younger generations of the elite born within it. Early elitist, just to break away from the national umbilical cord, still remember the contact with the depths of popular life. But later begins the process of this withering away: I want to stand out from the masses, and if so, then it is important to discard the values ​​she professed. And here the elite betrays the people, rushes to the stranger, throwing it in its garbage. And naturally it turns into a cultural werewolf and ... a victim of axiolytic war. The elite, believing that by borrowing extraneous values ​​and budding off from the people, it increases in independence, but in reality it becomes the servant and slave of someone else’s, more powerful elite.

The elite and the public-state system of the Russian Empire were ditched in the first two ways, and the USSR crushed the third and fourth axiological millstones.

1975 is the most tragic year in the history of the Soviet Union. This is the year of the capitulation of the Soviet elite to Western values, a year of cultural betrayal, a year of fixing spiritual corruption. Without the Helsinki Declaration, falling into axiological schizophrenia would never have happened. And various "human rights" (read - frankly hostile to the Soviet system!) Organizations would not receive a blank check for subversive activities, and the war in Afghanistan could not be accompanied by all the information negative that literally flooded non-socialist countries after 1979.

In Helsinki, the values ​​of the enemy were identified as their own. They designated and signed ... Not a declaration, but death to the Russian state. Gorbachevschina hatched from a Helsinki egg.

After the collapse of the USSR, the Western elites unanimously forgotten the declaration (there were provisions in it that were disadvantageous to the “civilized world”). The principle of the inviolability of borders dropped instantly. However, what is there to hide, they never intended to follow it. A huge number of Western politicians in one degree or another passed through Jesuit schools or colleges. And the Jesuits had a postulate known as "mental reservation." The easiest way is to convey its essence in the following way: in words - “I will surely fulfill the promise”, but mentally reserved - “To the limit, until the oath hinders me.” Therefore, accusing the West of applying double standards in politics is as ridiculous as teaching a hyena not to eat carrion ...

Pitirim Sorokin, a Russian-American sociologist, a professor at Harvard University, developed a theory of the historical process, examining the latter through the lens of a shift in cultural and social super-systems. In Europe and the USA, this theory was known and used by it in the 70s. XX century in the axiopolitical war against the USSR. The values ​​of a degenerating sensual culture were imposed on the Soviet super-ethnos, and the values ​​of ideational culture froze “monetary fetishism”.

Now we are sitting at the broken cultural trough. And in it to us pour all sorts of dregs: sodomy, juvenile, etc. And they look at us like a goat with a button accordion. And what remains to do? Recall that we are human, to take at least a harmonica, and with a song: “Our proud“ Varyag ... ”does not surrender to the enemy - forward along the streets, from house to house, from soul to soul ...