Flying robots to study the surface of Mars

July 25 2013
14
At present, the surface of Mars is investigated using special orbital stations, as well as stationary modules or low-speed rovers. Between these research vehicles, there is a sufficiently large gap, which various aircraft could fill. It would seem, why the artificial man-made vehicles still do not fly over the surface of the Red Planet? The answer to this question lies on the surface (in all senses), the density of the atmosphere of Mars is only 1,6% of the density of the Earth’s atmosphere above sea level, which in turn means that planes on Mars would have to fly at very high speeds in order not to to fall.

Such representatives of our planet as butterflies or hummingbirds can fly in an atmosphere with low viscosity, that is, in the same atmosphere as on the surface of Mars. That is why they can make very good models for creating future models of aircraft suitable for conquering the Martian atmosphere. The maximum dimensions of such devices could be calculated using the equation of the English scientist Colin Pennisyuik from Bristol. However, the main problems still need to recognize the issues associated with the maintenance of such aircraft on Mars at a distance from people and in their absence on the surface. 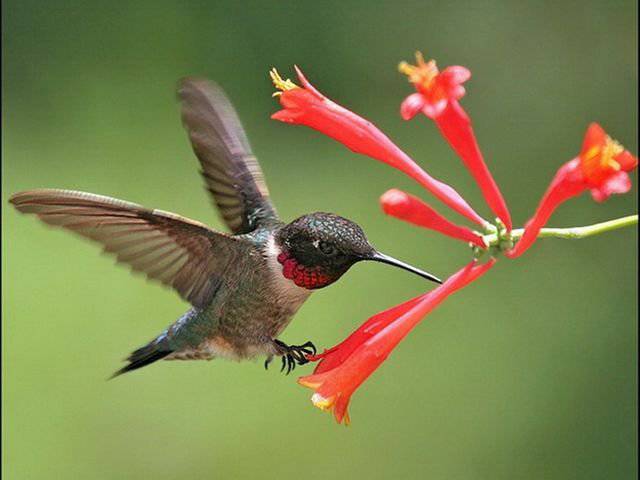 The behavior of all floating and flying animals (as well as machines) can be expressed by the Reynolds number (Re): to do this, multiply the speed of the flyer (or swimmer), the characteristic length (for example, the hydraulic diameter if we are talking about a river) and the density liquid (gas), and the result obtained by multiplying the result divided by the dynamic viscosity. The result is the ratio of inertial forces to viscosity forces. An ordinary aircraft is able to fly at a high number of Re (very high inertia with respect to air viscosity). However, on Earth there are animals that "lack" a relatively small number of Re. These are tiny birds or insects: some of them are so small in size that, in fact, they do not fly, but float through the air.

The paleontologist Michael Habib, considering this, suggested taking any of these animals or insects, increasing all the proportions. So it would be possible to get an aircraft adapted for the Martian atmosphere, and not in need of high speed of flight. The whole question is, to what extent would a butterfly or bird be enlarged? This is where the Colin Pennisyuik equation appears. This scientist in the year 2008 offered an estimate according to which the oscillation frequency can vary in the range that is formed by the following numbers: body weight (hull) - to the extent 3 / 8, length - to the degree -23 / 24, wing area - to the extent - 1 / 3, gravitational acceleration - to the extent 1 / 2, fluid density - to the degree -3 / 8.

This is quite convenient for calculations, since it is possible to make corrections that would correspond to air density and gravity on Mars. At the same time, it will also be necessary to know whether we are “forming” the whirlwinds from the use of wings. Fortunately, here too there is a suitable formula, which is expressed by the Strouhal number. This number is calculated in this case as the product of frequency and amplitude of oscillations divided by speed. The value of this indicator will greatly limit the speed of the device in cruise flight mode. 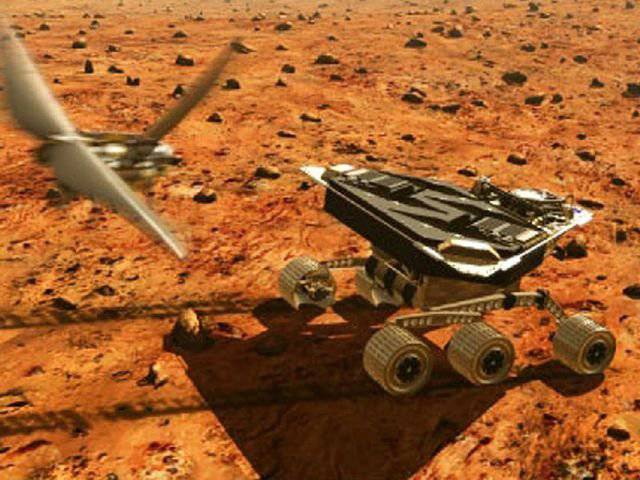 The value of this indicator for the Martian apparatus should be from 0,2 to 0,4, in order to comply with the Pennyuyuk equation. In this case, at the end it will be necessary to bring the Reynolds number (Re) in the interval that would correspond to a large flying insect. For example, in well-studied hawk moths: Re is known for different flight speeds, depending on the speed, this value can vary from 3500 to 15000. In this range, Michael Habib offers to meet the creators of the Martian aircraft.

Solve the proposed system today in various ways. The most elegant of them is the construction of curves with finding the points of intersection, but the fastest and much easier to enter all the data into the program for calculating matrices and solve iteratively. The American scientist does not provide all possible solutions, focusing on the one that he considers the most appropriate. According to these calculations, the length of the “hypothetical animal” should be 1 meter, the mass of the order of 0,5 kg., The relative elongation of the wing - 8,0.

For an apparatus or a creature of this size, the Strouhal number would be 0,31 (a very good result), Re is 13 900 (also good), the lift factor is 0,5 (an acceptable result for cruising flight mode). In order to really imagine this device Habib compared its proportions with duck. But at the same time the use of non-rigid synthetic materials should make it even easier than a hypothetical duck of the same size. In addition, this drone will have to slam its wings much more often, so here it is appropriate to compare it with the midge. At the same time, the Re number is comparable to that of butterflies, which makes it possible to judge that for a short time the apparatus will have a high lift coefficient. 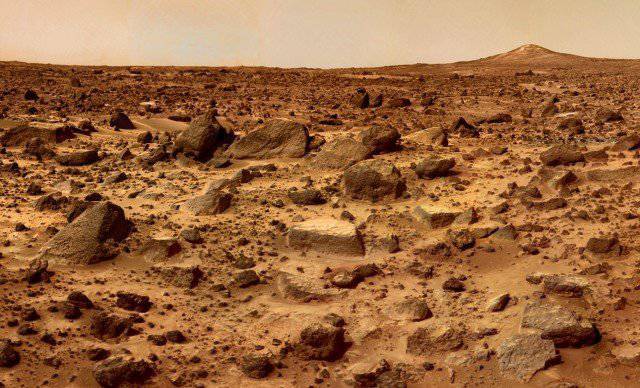 For fun, Michael Habib proposes to admit the fact that his hypothetical aircraft will fly in the manner of a bird or an insect. Everyone knows that animals do not run away on the runway, for take-off they are repelled from the support. For this, birds, like insects, use their limbs, and bats (it is likely that pterosaurs had done this before) also used their own wings as a pushing system. Due to the fact that gravity on the Red Planet is very small, even a relatively small push for take-off is enough - in the 4 area,% of what the best terrestrial jumpers can demonstrate. Moreover, if the pushing system of the device manages to add capacity, it will be able to take off even from craters without any problems.

It is worth noting that this is a very rough illustration and no more. Currently, there are a large number of reasons due to which space powers have not yet created such drones. Among them can be identified the problem of deployment of the aircraft on Mars (can be done using the rover), maintenance and power supply. The idea is quite difficult to implement, which ultimately can make it ineffective or even completely unfeasible.

Over 30 years, Mars and its surface were examined by a wide variety of technical means, it was examined by orbital satellites, and more than 15 types of various devices, wonder-terrain vehicles and other clever vehicles. It is assumed that soon a robot plane will be sent to Mars. At least, NASA has already developed a new project for a special robotic aircraft designed to study the Red Planet. It is assumed that the aircraft will study the surface of Mars from a height comparable to the height of the Martian all-terrain vehicles, researchers. 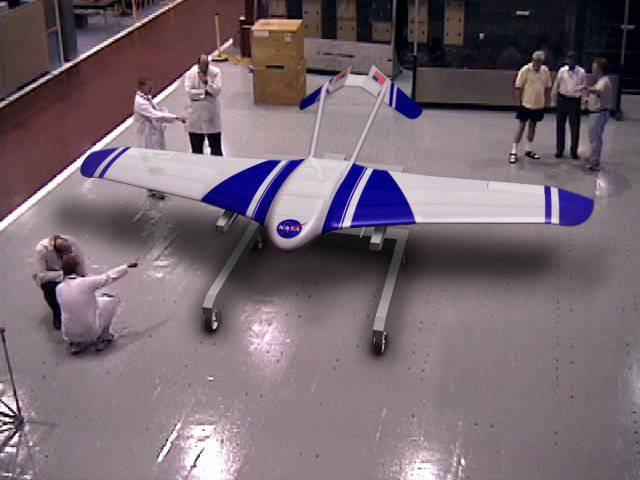 With the help of such a Marsolet, scientists will discover the solution of a large number of the enigmas of Mars, which have not yet been explained by science. The aircraft will be able to soar above the surface of the planet at a height of about 1.6 meters and fly many hundreds of meters. In this case, this unit will produce photo and video in different ranges and at a distance to scan the surface of Mars.

All advantages of modern mars rovers multiplied by the potential of exploring vast distances and areas should be combined in Marsolat. Marsolet, which has already received the designation ARES, is currently creating 250 specialists working in various fields. Already, they have created a prototype of the Martian aircraft, which has the following dimensions: the wingspan of 6.5 meters, the length of 5 meters. For the manufacture of this flying robot is planned to use the easiest polymeric carbon material.

This device is supposed to be delivered to the Red Planet in exactly the same package as the device for landing on the surface of the planet. The main purpose of this body is to protect the marsolet from the destructive effects of overheating when the capsule comes into contact with the atmosphere of Mars, as well as to protect the device during landing from possible damage and mechanical damage. 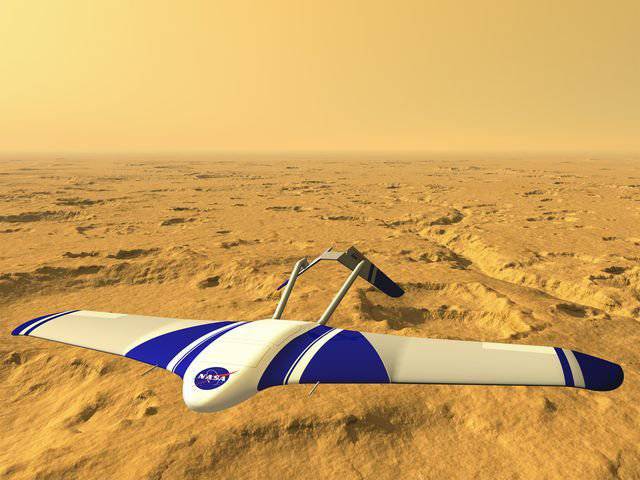 It is assumed that the aircraft ARES will be able to fly over the Martian mountains, which are completely unexplored by earthlings and conduct the necessary research. Ordinary rovers can not climb mountains, and satellites are difficult enough to distinguish parts. At the same time, in the mountains of Mars there are zones with a strong magnetic field, the nature of which is incomprehensible to scientists. In flight, ARES will take air samples from the atmosphere every 3 minutes. This is quite important, since methane gas was found on Mars, the nature and source of which is absolutely not clear. On Earth, living beings produce methane, while the source of methane on Mars is completely unclear and is still unknown.

Also in MAROLET ARES are going to install equipment for the search for ordinary water. Scientists suggest that with the help of ARES they will be able to obtain new information that will shed light on the past of the Red Planet. Researchers have already dubbed the ARES project the shortest space program. A Martian plane can stay in the air for only about 2 hours, until its fuel is consumed. However, in this short period of time, ARES will still be able to cover the distance of 1500 kilometers above the surface of Mars. After that, the device will land and will be able to continue to study the surface and atmosphere of Mars.