Expert Sergey Komkov: “We have our own practices and traditions” 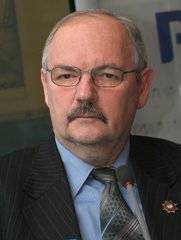 Representatives of the Public Chamber, including the initiators of the Unified State Examination, proposed several fundamental changes to this system. Essentially we are talking about a partial return to the previous methodology for assessing the knowledge gained.

- There is nothing surprising in the fact that now the experts of the Public Chamber offer. Opponents of the USE insisted on this 10 – 15 years ago. But then nobody wanted to listen to us. We were confident that the system would collapse. And they were right. But now our opponents are submitting these offers as their own.

At the collegium of the Ministry of Education and Science in November 2005, the then head of the Federal Testing Center Vladimir Khlebnikov and I argued that all graduates should not be approached with the same standard - in the form of testing. Minister Andrei Fursenko and the head of the Rosobrnadzor, the current vice-president of the Russian Academy of Education, Viktor Bolotov, rejected our point of view and declared their desire to simplify the state exam and make it universal. Now we see that nothing came of this intention. I will not repeat the stories about the scandals that have happened this summer around the exam. They have become commonplace.

We argued that introducing a test exam in the Russian language and literature is a complete absurdity, especially since the latter subject forms the moral principles of man. They asked to leave at least a dictation or statement. No written work is needed - such was the position of Mr. Fursenko, Bolotov and Kuzminov. And what? Now Yaroslav Kuzminov himself proposes to replace the EGE in the Russian language with a composition.

In fact, the Unified State Exam ceases to be such, because it becomes a two-level: basic and specialized. Kuzminov states that the profile level is not tests, but independent written work, tasks, and essay. Now he understands the need for students not to plunge into the atmosphere of “dragging on the USE”, but to study normally. What prevented to realize it eight years ago?

For what purpose were the teachers' strength spent, huge state money? Only by 2001, about a billion dollars had been “mastered” for organizing an experiment with the USE. I’m not mistaken if I assume that this figure has increased since 5 – 6 times. Who is responsible for these thoughtless costs?

But, I am afraid that the most important losses are the generation that has passed through the Unified State Examination, which cannot be called anything other than flawed. It will be difficult for him to find himself in life.

Our "reformers" at one time took as a model the American experience. But the United States recognized the failure of the test system, and in 2009, President Obama canceled it. The country has moved to the classical form of oral exams. It seems that this led to changes in the approaches of domestic followers of foreign innovations.

But we have our own achievements and traditions, so that even the rejection of “exotic plants” that did not take root on Russian soil does not mean that the manuals on national pedagogy should be written from scratch. Even at the aforementioned collegium, Vladimir Khlebnikov and I suggested applying the principle of “portfolio”, when a student’s work is not assessed by test tasks, but creativity, circle classes, victories in competitions and competitions, etc. are taken into account.

The one who said “A” must also pronounce “I.” We are talking about the initiators of the exam. This idea, as we expected, is crumbling. Next you need to go to the implementation of the oral exam stories, completely different method of certification in mathematics. It is necessary to change the whole system of education in high school and the forms of its assessment, the system of admission to higher educational institutions. There is a lot of work ahead, the fulfillment of which is beyond the power of blunt and inert officials of the Ministry of Education and Science. Without the involvement of the general public, they will not succeed.

Ctrl Enter
Noticed oshЫbku Highlight text and press. Ctrl + Enter
We are
What you didn't want to know about England
Military Reviewin Yandex News
Military Reviewin Google News
32 comments
Information
Dear reader, to leave comments on the publication, you must sign in.