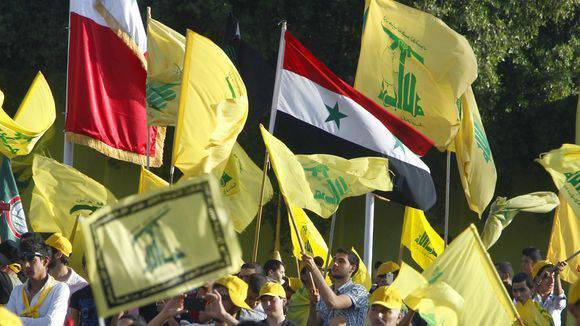 The European Union, at a meeting at the level of foreign ministers, decided to include the Lebanese Hezbollah party in the list of terrorist organizations. This may entail new sanctions not only against Hezbollah itself, but also against Lebanon and Syria.

Hezbollah is one of the most prominent and most popular parties in Lebanon. This is not al-Qaida or the Muslim Brotherhood - it is a major political party that is part of the government. With her, the Lebanese associated victory over the Israeli aggressor in 2006.

For all these years, no one has ever been able to blame Hezbollah for the terrorist attacks against civilians. She fought against the Israeli occupiers and aggressors. Israel has long retained the southern territories of Lebanon, and so far a part of the country's territory is under occupation. "Hezbollah", which fought with them - the same "terrorists", like our partisans during the Great Patriotic War.

In the 2006 year, when Israel committed unprovoked aggression against Lebanon, Hezbollah was the leading force of resistance. Then, as a result of the monthly bombardments that inflicted countless wounds on both Beirut and other cities, Lebanon persevered.

So, no one, except Israel and the United States, has so far been able to accuse Hezbollah of terrorism, no matter how much the Zionists want it. Attempts to accuse the organization of involvement in the terrorist attack in Bulgaria, which occurred a year ago in the city of Burgas, then failed. And there is no evidence of her involvement in this crime. However, gentlemen from the EU, as well as the United States, do not particularly bother with evidence, making politically biased decisions.

A whole year has passed since the terrorist attack in Bulgaria, in which he was accused of involvement in Hezbollah. And then this question was not raised, and even the Bulgarian authorities themselves did not raise it. But during this time, the Syrian terrorists, as well as the Gulf monarchies that supported them, raised a huge uproar over the participation of Hezbollah in battles on the side of the Syrian government army. And it’s shameful that a part of the Arabs subjected this organization of the Arab resistance to fierce attacks. The League of Arab States, which, it would seem, should show solidarity with resistance to the forces of Zionism, in fact rendered them a great service.

Thus, the terrorist attack in Bulgaria is only a cover for the EU. It turns out that Hezbollah is being punished for nothing else, just for its position on Syria.
This is part of the interfaith war that the West, the United States and Israel are inciting in the Middle East. They are trying to drive a wedge forever between representatives of the two main currents of Islam - Shiites and Sunnis. One of the reasons to stir up hatred of Hezbollah is to declare it a “Shiite” organization and, therefore, a group of “infidels.”

Moreover, when the same US had to attack Iraq, they shouted that the Sunni majority oppressed the Shiites. In Syria, they are now trying to create the view that Shiites and Alawites are already supposedly oppressing the Sunnis. And more and more countries are being drawn into this conflict.

In fact, it is time for both Sunnis and Shiites to understand one thing - the United States and Israel do not care about the suffering of both. They always support the side that benefits them.

In response to the EU’s decision regarding the Hezbollah Party, the Syrian Foreign Ministry said that this decision encourages aggression and occupation. The Foreign Ministry strongly condemned those who are behind the adoption of a similar decision aimed against the present and future of the Arab nation.

As the Party of the Arab Socialist Renaissance stated on this occasion, this decision was made by Europe under the leadership of the United States and the Zionists, in which reactionary Arab forces, especially Saudi Arabia, also played a role. This decision, the party stressed, exposes the essence of the colonial plan called the Arab Spring.

The party noted that it was taken on the eve of another anniversary of the victory of Lebanon over Israel in the 2006 war of the year. “It once again demonstrates the policy of double standards. The EU does not see anything wrong in the Israeli occupation of Arab territories, does not notice the manifestations of racism against the Palestinians. In addition, the EU does not consider it a violation of international law in the war unleashed against Syria, ”the statement said.

Indeed, those parties that say that Hezbollah’s participation on the side of the Syrian government army — I stress, the official state and the legitimate army — do not “notice” that tens of thousands of mercenaries from other countries participate on the side of illegal armed groups, do not “notice” the true of a terrorist international who commits crimes against civilians and is not in a hurry to add the “Syrian Free Army” to the list of terrorist organizations, although the bill is precisely the death of many civilians, women, children , Old.

And the same organizations, such as Al-Qaeda and Dzhebhat An-Nusra, already listed as terrorists, feel at ease under the auspices of the United States, the monarchies of the Gulf and Europe.

Ctrl Enter
Noticed oshЫbku Highlight text and press. Ctrl + Enter
We are
Bashar al-Assad: In Syria, not the “revolution” that the enemies are talking about, but the revolution of the army and the people against terroristsBashar al-Assad: Captain does not run from the ship
Military Reviewin Yandex News
Military Reviewin Google News
107 comments
Information
Dear reader, to leave comments on the publication, you must to register.