The joy of Britain and the blood of Syria 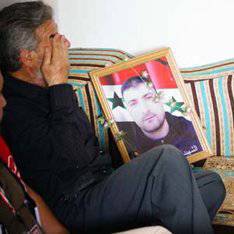 I remember again, as in those days when the NATO aviation in 2011, they brutally bombed Tripoli, Sirte and other Libyan cities, killing innocent women and children - and all the media vied with each other about the wedding of the British prince. Then the Libyan children even congratulated the newlyweds: at a press conference attended by international media, they went up to the podium, holding images of William and Kate in their hands: from the prince’s hands, blood dripped directly onto the bride’s white dress.


And here again, all world media announce a joyful event: this happy royal family gave birth to an heir. On the eve of this event, journalists around the world, arguing with each other, tried to guess who the Duchess would give birth to, as if all people's attention was focused only on London’s elite maternity hospital. And in the Middle East, at the hands of the West (including Britain) and their mercenaries, people continue to die. This time - in Syria.

The terrorists, supported, including by Britain, do not spare even shrines. They fired mortar shells on one of the most important Syrian shrines - the tomb of the prophet's granddaughter Seyida Zeinab, located in the suburbs of Damascus. As a result, the director of the museum complex Anas Rumani died and several visitors were injured.

With the desecration of the Muslim shrines of the militants, it was not embarrassing that the holy month of Ramadan is now continuing.

The terrorists did not even think about Ramadan when the imam of the mosque, Sheikh Osama Taufik Al-Asar, was killed near the coastal city of Baniyas, near the village of Al-Kreir. The accompanying citizen died with him.

In the city of Homs, as a result of mortar shelling of terrorists, a shell fell near the building of the Department of Health. As a result, three civilians were killed.

The tragic incident occurred in the area of ​​Ras Al Ain, where militants terrorize the Kurds. The Kurds were forced to create their own self-defense units in order to defend themselves against the arbitrariness of the “defenders of democracy”. Kurdish fighters captured one of the ringleaders of the bandits named Abu Musaab.

Then the terrorists, frustrated by the defeat, took 500 hostages of peaceful, innocent Kurds - mostly women and children. Some of the hostages were indicatively beheaded.

Kurdish self-defense units were forced to release a captive gangster, but the “oppositionists” violated their obligations and released not all the hostages. 200 people are still languishing in captivity, and a terrible fate may await them.

On this occasion, the Ministry of Foreign Affairs of Russia protested against the atrocities of the militants, which said: “The events in the north-east of the SAR once again confirm the urgency of the call for all Syrian parties to rally efforts to defeat and expel terrorist groups from the country.”

But the foreign ministries of Western countries do not react to the arbitrariness of the terrorists and their war crimes. Although we can recall how they wept about the rights of the “unfortunate” Kurds, who were allegedly oppressed in Iraq. They cried exactly until such time as it was necessary to justify the American invasion of Iraq.

But, unlike the “regime” of Saddam Hussein, allegedly oppressing the Kurds, democratic “Syrian rebels” are allowed to oppress them.

One could not talk about the sad. One could sincerely rejoice at the heir born in Britain - small children are so sweet and touching ... But how I would like the same Britain to pay attention to the arbitrariness of terrorists against the same children ...

But England is silent ... More precisely, not quite silent. It would be much better if she did not pay attention. But it does exactly the opposite - it plans new assistance to terrorists. And public attention from these inhuman actions is distracted by the hype around the birth of a high-ranking son ...

Ctrl Enter
Noticed oshЫbku Highlight text and press. Ctrl + Enter
We are
In Donetsk, a monument to Uncle Vasya was installed, and the ukrokrateli “congratulated” the Donbass on the Day of MetallurgEx-boxer V. Klitschko throws out "white towel"
Military Reviewin Yandex News
Military Reviewin Google News
39 comments
Information
Dear reader, to leave comments on the publication, you must to register.