July 26 2013
69
It's no secret that China is trying to develop its armed forces, including the Navy. Regularly there are reports of the launching or acceptance of new ships and submarines in the naval forces. However, talking about their successes, the Chinese military usually do not disclose most of the details of these or other projects. In this regard, some interesting facts about the new military equipment are found out only some time after the start of its construction or operation. 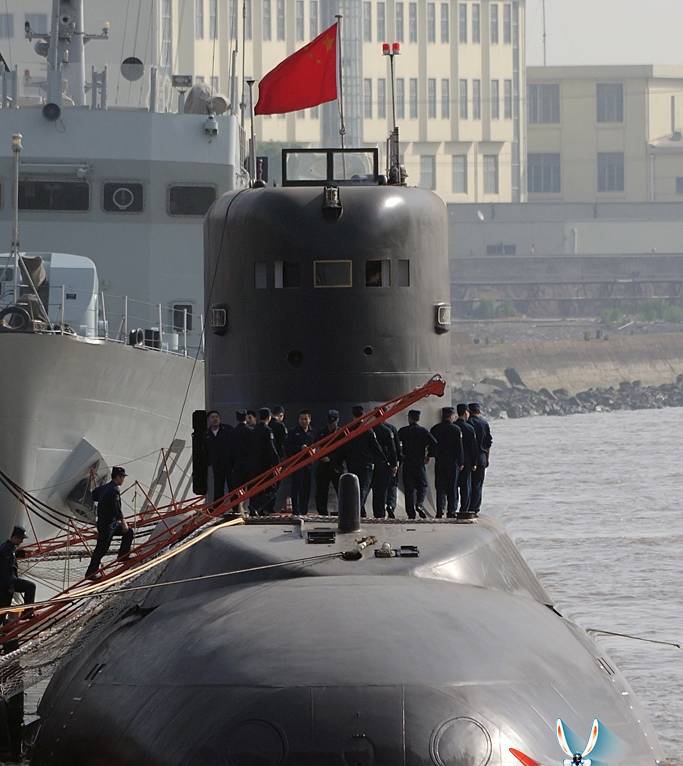 Approximately the same thing happened with the new Chinese submarine of the project "Type 032" (western designation QING-Class). Until recently, only the very fact of its existence was known. However, a few days ago, the Chinese Military Review blog published some very interesting data, according to which the submarine with the 201 tail number is a record holder. On a published poster with the data of this submarine it is indicated that it has a surface displacement of just under 3800 tons and a scuba - 6628 tons. Given the fact that the new submarine of the 032 project has a diesel-electric power plant, the appropriate conclusions should be made: this submarine is the largest diesel-electric submarine in the world.

The Chinese submarine also surpasses all foreign analogues in its dimensions. The length of its body exceeds the 92 meter, the width is about 10. The width of the boat, taking into account the horizontal rudders, is 13 m. The highest height is more than 17 meters, the draft is 6,85 m. For comparison, the Russian diesel-electric submarines of the 636 Varshavyanka project have a hull with a length of about 74 meters and a width less than 10. Submerged Russian submarines do not exceed 3100 tons. Thus, according to the last parameter, the Chinese submarine is more than twice Russian.

The robust hull of a Chinese submarine with the number "201" allows you to dive to a depth of 160 meters (working), and if necessary, and on 200. The power plant, combining diesel engines and electrical systems, the type of which has not yet been announced, accelerates the submarine in a surface position to 10 nodes. When submerged, the submarine has a maximum speed of no more than 14 nodes.

Interesting data on the autonomy of the new Chinese submarine. If there is a standard crew of 88 people on board, she is able to stay at sea for up to 30 days. If the crew increases to 130 or 200 people, the autonomy is reduced to five or three days, respectively. At the same time, apparently, the duration of autonomous navigation is reduced not because of a lack of available fuel, but because of the greater “consumption” of food. 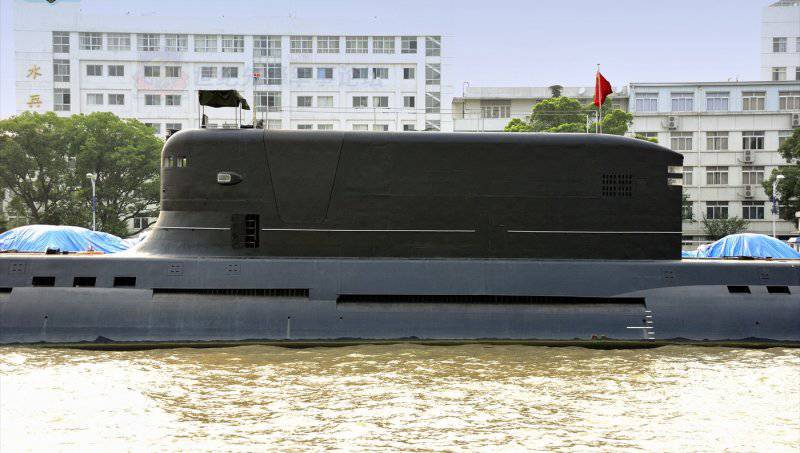 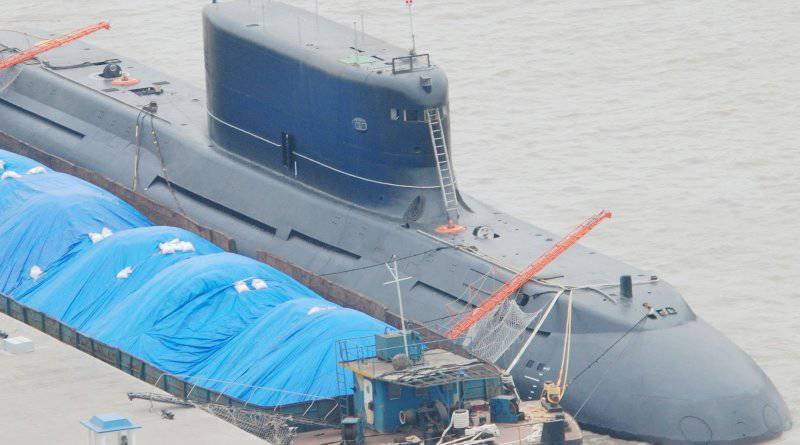 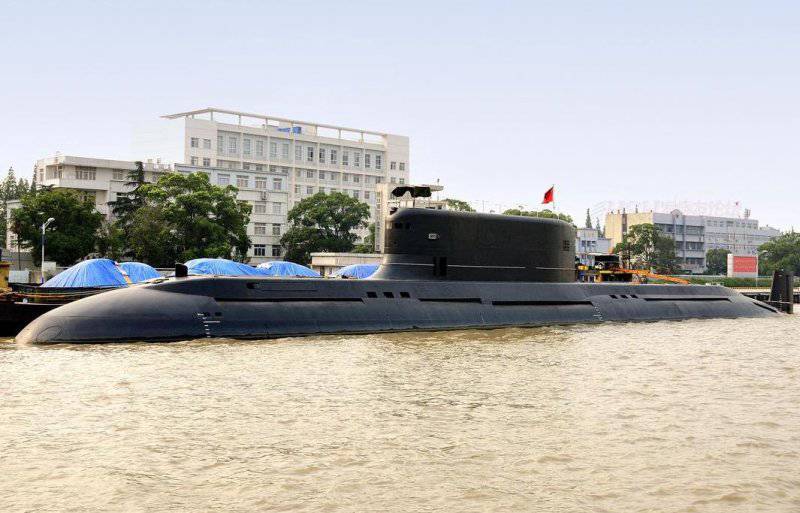 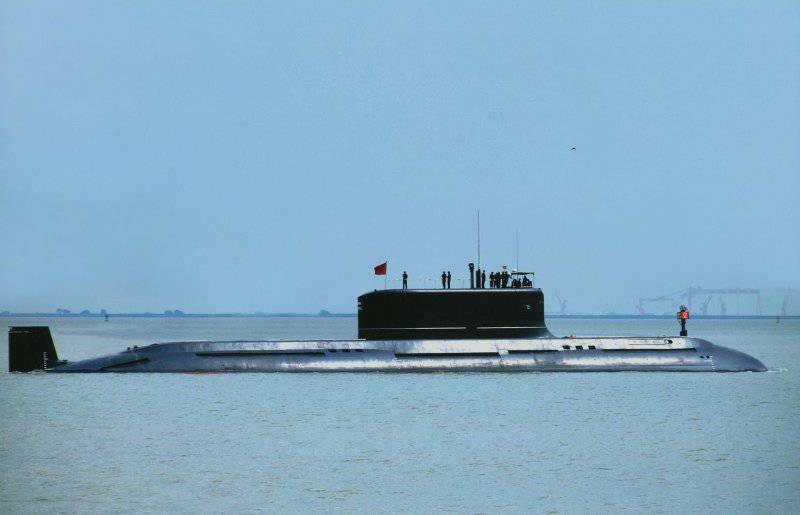 According to various sources, the development of the project “Type 032” was launched in 2005 year and it was intended to replace the only submarine of the previous project 031. Recall that, in accordance with the 031 project, only one diesel-electric submarine was built in the early sixties. It is noteworthy that in fact it was a Soviet boat of the 629 project, which, in its unfinished form, was transferred to China from plant No. XXUMX (Komsomolsk-on-Amur). Chinese shipbuilders completed construction and equipped the submarine in accordance with their plans. This submarine, which received the side number "199", was used to develop technologies related to the creation of submarine ballistic missiles. In particular, the only submarine of the 200 project conducted test launches of several types of missile prototypes. However, this diesel-electric submarine was exclusively an experimental model, not intended for service or duty in the seas and oceans. In a number of sources, there is a statement that, due to this role, the boat did not receive some of the special equipment with which the submarines are equipped.

Over the past decades, the old 200 submarine has become obsolete both morally and physically. In this regard, a new submarine was built, in which modern technologies, materials and technologies are used. The development of the 032 project started in the middle of the last decade, and a few years later, approximately in 2008, the construction of a new submarine began at the Wuchang Shipbuilding Industry Company shipyard (Wuhan). In the fall of 2010, the boat was launched. The next two years, the submarine was on sea trials. October 16 2012 of the year it was officially accepted into the naval forces of the People’s Liberation Army of China.

Like its predecessor, the 201 submarine will be used for technical solutions and weapon tests. A recently published figure schematically depicts a test launch method: two ballistic missile shafts are located inside the hull, the cabin and the fencing of the latter. Thus, the new submarine will be able to perform only test tasks, since the ammunition load of one or two missiles will not be sufficient for full-fledged combat work. It is also suggested that other systems may be tested on the 032 submarine. This version is supported by the size of the submarine hull, in which various equipment can be inscribed, including for nuclear submarines. There is information about the plans of the Chinese shipbuilders and military to use the boat "201" as a stand for testing new torpedoes.

An interesting feature of the design of the new submarine steel new rescue system. The 032 project for the first time in Chinese practice involves the use of a pop-up rescue camera. As can be seen in the available photos, the design of the camera is somewhat similar to that used on Russian submarines.

The plans of the Chinese command regarding the use of the new diesel-electric submarines have not yet been announced. Probably in the very near future she will receive the appropriate equipment and will soon begin her work. On the other hand, a prototype submarine can stand idle for several years, as it was with the previous submarine of the 031 project. It is possible that in China a certain new ballistic missile for submarines is currently being created, in the tests of which the submarine "201" will take part in the tests. However, accurate data on this matter will appear later, when the world's largest diesel-electric submarine starts to perform the tasks assigned to it.

Ctrl Enter
Noticed oshЫbku Highlight text and press. Ctrl + Enter
We are
About the future of underwater robotics16-I Red Banner Squadron of submarines
69 comments
Information
Dear reader, to leave comments on the publication, you must to register.