July 25 2013
103
Recently, the Latvian President Andris Berzins made a far-reaching initiative. He said that in order to implement the NATO principle of “reasonable defense”, the armies of the three Baltic countries would be advisable to combine into one.

It is necessary to go towards a much closer consolidation of forces, because individually we are less strong, and especially in the field of naval forces. The concept of “smart defense” should move all things forward. 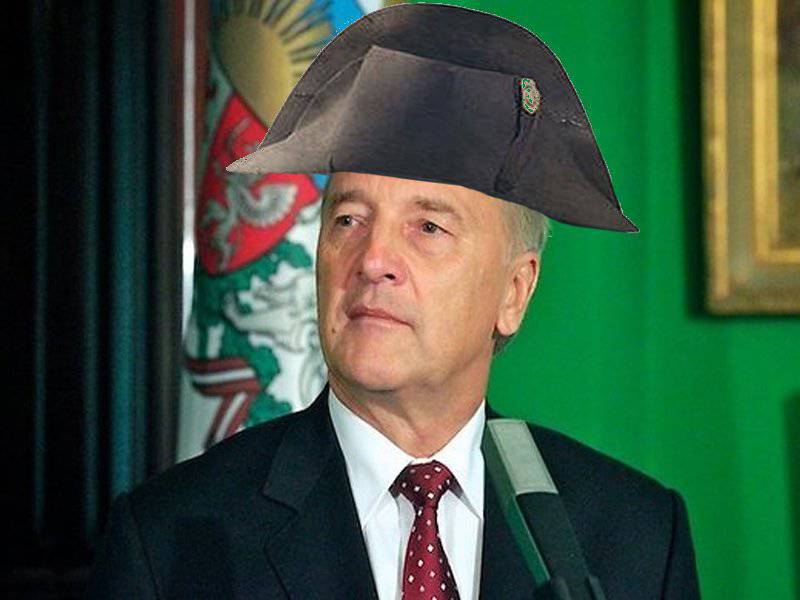 Apparently, the Latvian president remembered a parable about how separate rods break with a flick of the wrist, and how hard it is to break a sheaf, tied from these rods, and therefore literally Napoleonic thought that the army of Latvia, Estonia and Lithuania must come to his head to integrate, putting at the head of this "formidable force" the single Baltic command.

The maxim of Berzins that “individually we are less strong” is indisputable. But how much stronger will be the united Baltic army, to which Berzins dreams in his dreams, is a big question. If the strength of the separate armies does not go beyond the statistical error for the average army of the North Atlantic Alliance, will there be much more power if these statistical errors are added? .. As they say, one mortar is good, two is better, and three is a combined Baltic army.

The Army (National Armed Forces) of Latvia today is an association of 5000 operatives (military personnel) and approximately 10-11 thousands of reservists. If we talk about military equipment used by the Latvian army, these are a couple of experienced aircraft, half a dozen helicopters (mostly Mi-17), armored cars, patrol boats, armored personnel carriers, small weapon, mortars and ... bicycles.

The Lithuanian Army has about 11 thousands of troops, more than 75% of which belong to the Ground Forces. They are armed with more than a hundred field artillery guns, 60 mortars, about 70 ATGM, recoilless 84-mm guns, armored personnel carriers, a dozen BRDM-2. The Lithuanian Air Force includes several Mi-8 and seven airplanes, most of which are Czech-made light transport vehicles (the same “Elki”). The Lithuanian Navy is a few patrol boats, a small anti-submarine ship of the 1124M project, Lindau minesweepers, a staff ship of mine-sweeping forces.
Army of Estonia. There are about 6 thousands of military personnel, up to 30 thousands of reservists. About 70 armored personnel carriers and armored vehicles, up to hundreds of artillery guns, about 200 mortars, about 100 anti-aircraft guns, 30 air defense missile systems.

If we talk about the volume of expenditures on national armies in the three Baltic countries on the level of GDP, here in the first place is Estonia. According to the results of 2011, the expenditure part of the budget for the army in this country amounted to about 1,86% (in Latvia - 1,14%, in Lithuania - about 1,6%).

Well, so what happens? .. Berzins becomes a few hundred mortars and one anti-submarine ship more ... What will change in the defense capacity of Latvia, and the whole Baltic? .. And, by and large, it’s not quite clear what purpose the Latvian President pursues his proposal, which, by the way, the Estonian leadership has already called inappropriate. If Andris Voldemarovich was going to show the “fuckin 'mother” to potential opponents of the Baltic states, then the plans are really Napoleonic, taking into account that at the official level the Afghan Taliban and Iraqi supporters of the ideas of the ousted and executed Saddam Hussein are the main opponents (judging by the participation of the Balts) international operations as part of NATO). Combining the Baltic armies to oppose the Taliban is certainly strong! .. You will not say anything.

But you and I know perfectly well what lurking thoughts were spinning in the head of Mr Berzins, once a member of the CPSU and the head of the Valmiera regional executive committee, when he voiced his proposal. And these thoughts after all obviously concerned the possibility of countering the main opponent of the entire Baltic sovereign democracy, according to the Baltic sovereign democrats themselves, the Russian Federation. Someone, of course, will say: what kind of dirty suspicions and insinuations ... Berzins, they say, did not think to express the idea of ​​uniting the armed forces of Latvia, Lithuania and Estonia with the aim of putting a kind of barrier to Russia. Yes, of course I did not think. I myself did not think ... After all, someone could have bothered. And it is known who. NATO has already once expressed similar thoughts about the desirability of bringing the three Baltic armies together. Apparently, in Brussels they can’t get used to the fact that the Baltic States are three different states, whose armies are entirely in the North Atlantic alliance, but at the same time they themselves cannot ensure the security of their territory. They cannot, if only for the simple reason that NATO pilots must constantly go to Baltic missions to protect the “Baltic democracy” from the air. From whom do they protect? From the Afghan Taliban? .. That was probably the idea of ​​the alliance officials: maybe these Balts should be combined at least at the military level - you see, as a result, it will be cheaper for the alliance - one thing is worth optimizing (read - reducing).

But if the Estonian and Lithuanian heads decided not to notice such aspirations of Brussels at one time, then Andris Berzins pointedly remarked and even wanted to get an approving pat on the shoulder from NATO bosses: they say ah and Andris, ah and North Atlantic son!

But after all, by and large, Berzins needed to come up with more progressive proposals for the entire Baltic states. For example, not only to unite the armies of Latvia, Lithuania and Estonia, but also to unite this three-body multi-unit formation with the US Army. Make a kind of remote warbler branch of the star-striped armed forces. This is the only way to teach “these Russians”, which, you know, constantly threaten the freedom and independence of the Baltic States, taking either its banks, then hotels, or entire elite villages on the Riga seaside “captive” ...

Ctrl Enter
Noticed a mistake Highlight text and press. Ctrl + Enter
We are
Republic of the former USSR. Latvia: years without “occupiers”The Latvian President is avenging a referendum on the status of the Russian language
103 comments
Information
Dear reader, to leave comments on the publication, you must to register.