July 25 2013
79
The other day, the US Congress, having visibly acted, agreed with the Nobel peacemaker Obama and gave the Pentagon the go-ahead for military assistance to those terrorists, hired bandits and cannibals, who in the most democratic state of the planet are considered to be "rebels", not sparing their belly fighting for democracy. Against the background of the decision of the congressmen, the head of the Joint Chiefs of Staff of the United States quarreled with the “hawk” McCain, a great friend of the kidnappers and a longtime supporter of the intervention in Syria. General Dempsey wrote a letter to the commission on the armed forces, in which he lucidly explained what could be an invasion of Syria - and how much it would cost. However, his arguments are of little interest to anyone: despite the economic crisis, and, perhaps, thanks to him, Barack Obama is eager to attack. 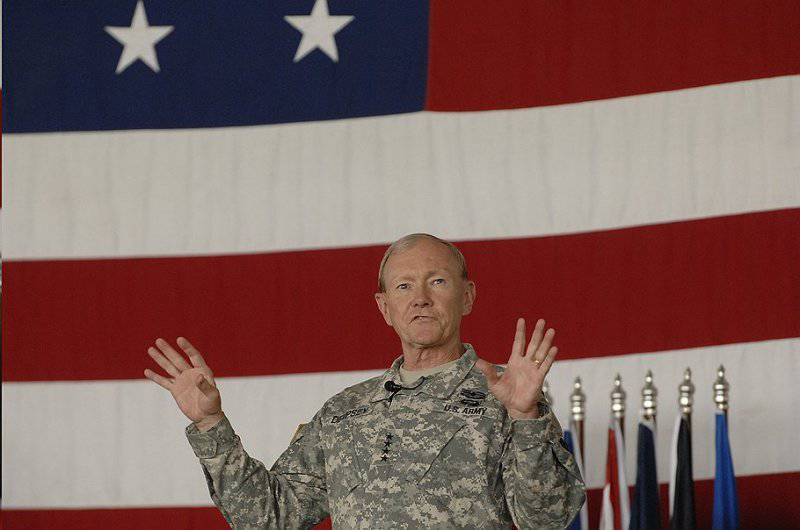 The head of the Joint Chiefs of Staff, General Martin Dempsey, warned that the military operation in Syria would be costly and ineffective (http://www.kommersant.ru)

The fact that media reports on the Senate’s approval for helping “rebels” are not a newspaper duck was confirmed at a recent briefing by Jane Psaki, the head of the State Department’s press service. She was asked if the White House would really start supplying the opposition weapon. Psaki answered: “This conclusion is correct, but I can’t talk about timing or specifics.”

The day before, General Martin Dempsey had a row with Senator McCain. An old “hawk”, long eager to bomb (sorry, democratize) Syria, found a way to put pressure on the general. Openly using his official position, the congressman announced that he would block Dempsey’s next approval for the post. But if the general provides a plan of operation ...

To this, the general came up with a good answer. He really made a plan. Even three plans - you never know, the first and second McCain will not like. So now there is a plan "A", and a plan "B", and a plan "C". We decipher: "training of opposition groups", "the introduction of a no-fly zone over Syria" and "drawing air strikes on Syria." True, Dempsey sent these plans not to McCain, but to Karl Levin - to the man who heads the commission on armed forces under the senate. However, there is no geopolitical difference between Levin and McCain. They threatened to start a campaign for the possible blocking of Dempsey as the head of the Joint Committee.

In the letter, the general cited some large numbers that should have annoyed McCain very much, because the hint was clear: there is a crisis in the country, and you spend billions here as easily as you burn matches.

Mr. Dempsey pointed out that the operation in Syria would require the use of "hundreds of aircraft, ships and other means of attack," and it would cost billions of dollars. Here is another hint: the United States can get a second Afghanistan. Or a second Iraq. However, the White House is no stranger.

And if one of the Americans is killed in Syria — they are shot down by an airplane, for example — then here is Vietnam as well, please. Such promising parallels should have made Mr. McCain very angry.

There is another hint in the letter - already a critical one, which the general did not allow himself before. "Getting to the action," wrote Dempsey, "we must be prepared for what follows." It will be difficult to avoid the expansion of intervention. We can inadvertently strengthen extremists or cause the use of chemical weapons that we ourselves want to control. ” Anyway, and in this way the general assessed the actions of the White House in supporting those forces that are recognized by the progressive community of the world as terrorists. As far as chemical weapons are concerned, Dempsey clearly hints at the possibility of criticism of his starry-striped homeland by this very world community. The White House probably hopes, as before, to repulse critics with propaganda, but each propaganda victory is given more and more difficult to aggressive hawks.

Dempsey pointed out in a letter that the Assad army could take Washington’s blow - on condition of dispersal of forces. The general believes that as a result of the operation, the Syrian government army will be only slightly weakened, for example, by an increase in desertion. The mere creation of a no-fly zone can fly the United States into a “pretty penny” equal to a billion dollars ... a month! Moreover, Dempsey doubts the necessity and effectiveness of such a zone: Assad is fighting on his territory - and uses mainly ground equipment.

It can be assumed that the plan “A” will be selected from the options (at least at the beginning of the anti-Syrian campaign). That is, special forces instructors will go to Syria, as well as supply of weapons will begin.

Interestingly, the “hawkishness” of the American satellite of Great Britain lately has not only subsided, but generally vanished. Cameron is no longer eager to supply weapons to the “opposition,” as he and Hollande called for before the EU. A few days ago, the British prime minister explained his new position, which is extremely inconvenient both for the “oppositionists” and for Washington: “It’s too hard to interfere. And besides, if we are not talking about such weapons, which we cannot supply for fear that it will fall into the wrong hands, our supplies will not give the opposition a decisive advantage. The conflict will only flare up even more. ” And Mr. Idris, the commander of the so-called Free Syrian Army, said that by refusing to supply weapons, Cameron "actually dooms us to death at the hands of a well-armed army of Bashar al-Assad."

Therefore Idris flew to the USA: there, he hoped, he would not be denied. And they did not refuse. The press wrote that the supply of American weapons to the Syrian "opposition" will begin in August.

Washington is not at all embarrassed by the fact that al-Qaeda groups plan to seize border crossings on the Syrian-Turkish border in order to establish their control over the northern territories of Syria. This is reported, among other things, by the sources of the Free Syrian Army. Correspondent "RT" Gayane Chichakian, referring to the Arab newspaper Asharq al-Awsat, indicates that Al-Qaida intends to conduct the operation after Ramadan. Then an Islamic state will be created in Syria. At the same time, Al-Qaeda members want to gain control over weapons coming from Turkey and over the profits from oil smuggling. There is information that the Front of Al-Nusra has already agreed with groups of smugglers about the division of profits in Deir-ez-Zor.

In another report correspondent. "RT" G. Chichakian says that American weapons spread across Syria. On the Internet there were photos of Shiite fighters supporting Assad, with Western weapons. Therefore, Washington does not control its own supply of weapons.

It is not known what way the M16 and the M4 with laser and holographic sights, as well as the M203 grenade launchers fell into the hands of soldiers fighting for Assad. Philip Smythe, an analyst at jihadology.net, says that "if you like, you can get anything you want." The most important thing is money and connections.

Of course, American weapons shoot in the hands of the Syrian militants. It is reported that American guns are armed with members of the Al-Nusra Front, which is controlled by Al-Qaida.

Well, this information the White House will not stop. Just think, M16, think, "al-Qaeda!" Who, in fact, spawned "Al-Qaida"? The same White House with the help of the CIA. The White House today is ready to be friends with the Taliban, and there is one small step before the “Al-Qaida”.

By the way, can Barack Obama think differently, not like his predecessors in the high office? Hardly. He's not Merlin Miller. All US presidents think the same way and do what previous presidents did. In addition, Obama is bewitched by Hillary Clinton, who mumbled everywhere like a spell: "Assad must go, Assad must go."

Assad, however, will not leave. This is the first. And secondly, if even the Americans managed to make the heat with other people's hands (God forbid), then who would they have missed in the rulers of Syria? Not long ago, Obama and his State Department rejoiced at the democratic election victory of Islamist Mursi. Whose victory would they like to rejoice at in Damascus? Ayman az-Zavahiri?

Observed and commented on Oleg Chuvakin
- especially for topwar.ru
Ctrl Enter
Noticed oshЫbku Highlight text and press. Ctrl + Enter
We are
Results of the week. “War is not poker! It cannot be announced when it pleases! ”Results of the week. “What do we need these americans - cow chase ?!”
Military Reviewin Yandex News
Military Reviewin Google News
79 comments
Information
Dear reader, to leave comments on the publication, you must to register.