Disposal of T-64 in Ukraine: who cares? 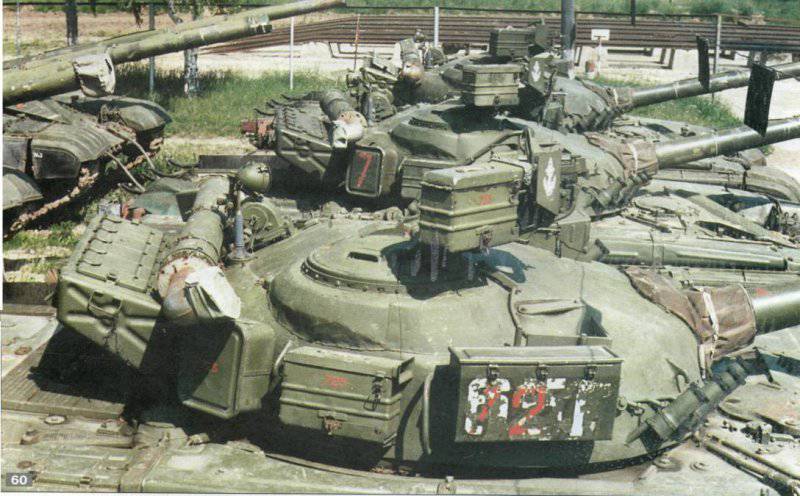 In the middle of July 2013, Ukrainian and international media did not receive pleasant information for Ukraine: as part of the Partnership for Peace program, the Alliance insists that Kiev send several thousand to be cut and re-melted. tanks T-64 Moreover, in order to discuss the details on this issue, a special commission is planning to arrive in Ukraine at the end of the same month. At the same time, it was also noted that the donor states of the NATO program should allocate funds for the disposal of tanks.

Despite the fact that these tanks are still of Soviet development and production, the state of today, both in service and in military warehouses, is about two thousand vehicles.

According to Vasily Litvinchuk, NSPA project manager in Ukraine (NATO logistics agency, previously NAMSA, the supply and maintenance agency), only America expressed its readiness to allocate about one million dollars for the disposal of Ukrainian tanks.

Such information caused some confusion not only for political forces, but also for the public, because quite recently - more precisely, in April of this year - the second stage of the NATO project of the trust fund of the Partnership for Peace program for recycling small-scale Ukraine weapons, light weapons and conventional ammunition were in jeopardy. Then the main problem was that the alliance simply did not allocate the promised money. Thus, in particular, according to Evgeny Golubenko, Director of Ukroboronservis, due to insufficient funding by donor states, the second phase of the project may not last four years, but at least twice as long, and this is when the disposal of ammunition is more what is relevant for the Ukrainian state.

And suddenly, against the background of these events, three months later, NATO decides that it is fully capable of paying for the disposal of Ukrainian T-64 tanks. By the way, the same Vasily Litvinchuk has repeatedly stated that the NATO projects in Ukraine greatly reduce the risk of man-made disasters. Undoubtedly, the way it is, but only if it comes to ammunition and rocket fuel components. But what relation to technogenic disasters T-64 tanks may have, however, like the already-cut 9K72 “Scud” complexes, long-range Tu-22 bombers or MANPADS, are completely incomprehensible.

Thus, it turns out that the North Atlantic Alliance does not have money only to eliminate funds that are technogenic danger, but the means to cut tanks that do not threaten any catastrophes will be enough to the full ... Weird turns out ...

In a situation like this, it is very important to understand what the goal of NATO really is, and what really this alliance is going to destroy. Currently, the T-64 tanks are, in fact, the main armored fist of the Ukrainian army. The Army has about 690 tanks, the Coast Guard has 40 vehicles, about 1,500 units in military warehouses and storage bases. All this equipment is stored in the arsenals for the purpose of completing tank units in the case of mobile deployment of the Ukrainian armed forces. Approximately 90 percent of all this military equipment is made up of T-72 and T-64B tanks.

Some "experts" say that the T-64 tank has a number of drawbacks. He is considered ineffective, because he was not in service with armies outside the Soviet Union. But in reality, the T-64 is a very complex technique that can be called a revolutionary model among armored vehicles. It was this model that initiated the second generation of tanks, and it was thanks to her that the term “main battle tank” appeared in the world (T-64, according to the standards in force in those years, belonged to the medium class, but due to the fact that it was equipped with heavy tank, in the previous classification did not fit).

It should also be noted that the T-64 due to the high technical complexity and demanded a high level of crew training. Therefore, he was not very "favored" in the Soviet army, which, as we know, was recruited at the expense of conscripts. Therefore, preference was then given to the T-72 tank, which was extremely simple to operate, and which was actively supplied by the Soviet Union to developing countries.

Thus, we can say that the T-64 tank is exactly the machine that is needed by the army, staffed with highly professional personnel, in other words, the kind of armed forces that Ukraine currently aspires to.

It must be said that the obvious indicator of the effectiveness of the T-64 can be the fact that it was these tanks that were equipped with the first-echelon groups of Soviet troops that were located in the Eastern European countries of the socialist camp and, if necessary, should be the first to enter into opposition with NATO by the troops. It is clear that for such purposes only the best equipment and the best weapons were used ...

In 1990, an article on the T-64 tank appeared in one of the Western specialized editions. It talked about the fact that T-64 allegedly could inflict huge losses on the alliance forces, because as soon as it became known in the West, all the programs for the development of anti-tank weapons failed. Obviously, nothing can last forever, and the leadership of this machine, too, but after a few years already T-64 appeared in a new guise, having received jet armor. Thus, NATO crews would have to deal with completely new development of secret weapons. It was thanks to his appearance that the military potential of the Soviet army increased.

Of course, many experts say that the T-64 tanks are outdated long ago, and that under the conditions of the new army this tank has no place in the troops. However, in reality this is not the case: the developers have laid such a powerful potential for improvements that it is quite possible to bring it to the most modern state. A striking example is the modernization of the tank under the T-64 BM Bulat program, which was developed at the Morozov Design Bureau and carried out at the Malyshev plant. The main goal of the modernization was to bring the combat and technical characteristics of the tank to the required modern level in several main areas: protection (reducing vulnerability from anti-tank weapons), mobility (upgrading the power compartment) and firepower (conducting modernization of the fire control system and weapons to increase the effectiveness of fire).

Tanks that have been upgraded under this program, so far continue to enter into service with the Ukrainian army. According to the military, the Ukrainian armed forces needed four hundred of these machines, but due to the lack of sufficient funding last year, the entire 76 T-64 was purchased, most of which were in the 8 Army Corps, in the village of Goncharovsky. In addition, several machines were at the disposal of the Desna training center, as well as the P.Sagaidachny Academy of Land Forces. And if you believe the statement of the new military minister P.Lebedev, in 2013, the agency plans to purchase 9 more such tanks for the needs of the army.

On the one hand, it would be more logical to assume that it would be more profitable for the Ministry of Defense to buy Ukrainian tanks “Oplot”, however, as the representatives of the department themselves say, modernization is still more relevant, because the cost of one “Oplot” is equal to five upgraded T-64.

In addition, the T-64BM Bulat tanks have quite good prospects for promotion in the external market. They are offered to Central European customers, that is, in those countries where these machines have been and are still in service. And this is understandable, because the upgraded T-64 is a very good economy option, because after the technical specifications, this machine is almost as good as modern models, but costs much less.

Thus, if NATO seriously thinks about depriving Ukraine of these tanks, then automatically it will deprive the country of the opportunity to make money on the world arms market. And this, by the way, is not the last argument that makes the alliance actively take up the elimination of Ukrainian technology. In addition, it turns out that NATO actually inclines Ukraine to deprive itself of armored forces. For their restoration, Ukraine will need at least four to five hundred western military vehicles, but due to the lack of adequate funding and rampant corruption, this will be almost impossible in the coming decades ...

And one more thing: a few years ago, the same Litvinchuk said that the alliance is considering the possibility of cooperation with Ukraine in the maritime partnership industry, the essence of which is to provide the Ukrainian side with certain services (refueling, providing navigational services, places for unloading sewage and garbage, providing food and water).

It turns out that NATO not only seeks to deprive Ukraine of the opportunity to earn a little on the foreign arms market, but also to turn it into a kind of marine garbage landfill, where alliance ships can unload all unnecessary and stock up with everything necessary.

Yes, such prospects are not very encouraging ...