Politics Political analyst Sergei Markov: “Navalny is a protege of the world oligarchy” 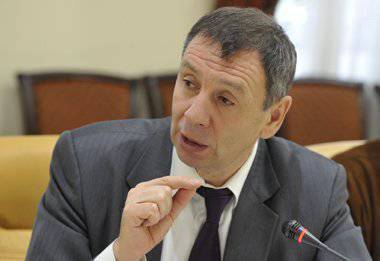 Quotes were spread by statements by the head of the US Political Economy Institute, Paul Craig Roberts, who said that the Russian opposition, like the "color revolutions" all over the world, is financed by the Americans.

- Recently, the trend for "color revolutions" in the US administration itself has noticeably weakened. Obama was, in particular, against the coup in Ukraine, which, obviously, was preparing against Viktor Yanukovych. In this regard, the Ukrainian president should be grateful to both Vladimir Putin and Barack Obama for their support. In addition, there was a very serious crisis in the relations of the American White House with Mikhail Saakashvili. The United States effectively ceased supporting Saakashvili in the fight against his political opponents.

That is, Obama, apparently, has ceased to rely on gross interference in the internal affairs of other countries - what the Bush administration, for example, has been doing - and is increasingly trying to find compromises, reasonable solutions in foreign policy issues.

However, other subjects of world politics continue to actively intervene in the internal political processes of different states. It can be said that the center for the preparation and financing of the “color revolutions” is now not in Washington, but in New York and London — the centers of the world financial oligarchy, where their main exchanges and headquarters are concentrated. The largest oligarchic groups have recently significantly increased their pressure on a number of states, including Russia.

And one of the projects of these oligarchic circles is the promotion of Navalny. The fact is that the support of the “color revolutions” initially came primarily from transnational oligarchies. The first such revolutions took place, as is known, in Slovakia and Serbia, then we observed the “revolution of roses” in Georgia. And, say, the Georgian revolution was financed by George Soros, and not by the then US administration. Moreover, at that time there was a strong mutual hostility between Soros and the Washington White House. Soros, a typical representative of the liberal-activist oligarchic network, fought both Shevardnadze, who, in general, was quite comfortable with Washington, and with official Washington itself.

Roughly the same thing is happening now stories with Bulk. At the same time, one should pay attention to how the Russian “liberal” public perceives him, who is positioning himself as a nationalist. Despite the fact that today his openly xenophobic statements have become widely known, Navalny is actively supported by such fighters with Russian nationalism as Evgenia Albats, Garry Kasparov, Sergey Guriev. The latter, by the way, at one time gave him a recommendation to one of the centers for the preparation of "national leaders" at Yale University. We don’t see the bright denunciations of Navalny from the pages of Moskovsky Komsomolets, we don’t read in the liberal press strong analytical articles showing that the nationalist Navalny is “fiendish”, we don’t see any investigations on this score in Novaya Gazeta.

Based on this, I personally conclude that Navalny’s candidature was approved for the role of the leader of the Orange Revolution in Russia. According to all the theories of “color revolutions”, he is supposed to be a sort of charismatic populist, who is allowed to use, including nationalist rhetoric, and xenophobic statements. For those who really support him from abroad, are well aware that Navalny is in fact a fake Russian nationalist.

All this is sewn with white thread. However, very large amounts of money have already been invested in Navalny, and obviously it would not be desirable to lose their foreign sponsors. Therefore, the mentioned sponsors will not refuse from this support at least in the near future. They will continue to support Navalny even despite the fact that his public statements radically diverge from the principles declared by the liberal public.

At the same time, the world oligarchy will put pressure on Obama, demanding that he take the "Navalny factor" into account and justify this pressure by the need to weaken Vladimir Putin’s power in our country. The US and Russian president need to work together to solve a lot of problems. And although Obama himself, I repeat, is not, in my opinion, a supporter of gross interference in the internal affairs of other states, he can also use the situation with Navalny purely pragmatically. That is, in the interests of his administration.

Ctrl Enter
Noticed a mistake Highlight text and press. Ctrl + Enter
We are
A great interview with Sergey Lavrov: about Ukraine, Obama and IranRussian "nationalism" in persons - statements of some famous people of Russia in the XVII-XX centuries
28 comments
Information
Dear reader, to leave comments on the publication, you must to register.