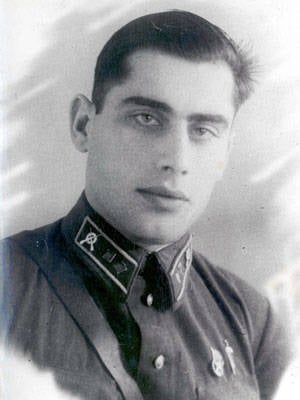 Although they say that the son of the father is not responsible ...


Our many years of peace has come at the cost of the lives of our compatriots - fathers, grandfathers. It is known what a cruel war, not for life, but for death, was the Great Patriotic War. The fate of not only the Soviet people, but the whole world depended on its outcome.

Frankly, after gaining independence, our journalism does not pay enough attention, both to prominent Azerbaijani commanders and generals, and to the heroism of our compatriots in World War II. But they could be a worthy example for young people. At one time in high schools, we studied the exploits of Maresyev, Gastello, but there was very little information about our national heroes. The exploits and biographies of such worthy compatriots as Hazi Aslanov, Huseynbala Salimov, Gerai Asadov, Israfil Mamedov have not been studied enough.

But not all of our heroes, we remember and honor their memory. One of such forgotten heroes is Jahangir (Vladimir) Bagirov. We are sure that his name is familiar to the older generation, but young people do not know him at all. We are talking about the brave hero of the Great Patriotic War, the cavalier of the Order of Lenin, and finally the son of the first secretary of the Central Committee of the Communist Party of Azerbaijan Mir Jafar Bagirov ...

The fate of Jahangir, whose father was a rather controversial figure, was very tragic. On the eve of World War II, he graduated from the International Faculty of Moscow State University and the Yeisk Military aviation school of pilots and the Tashkent military school. From the first days of the war, as a fighter pilot, Jahangir takes part in air battles near Moscow.

In the 1942 year, in a heavy air battle near Serpukhov, Vladimir was wounded in his left hand, but despite this, he was able to skillfully land the plane. Jahangir barely endured the hospital, wanted to return to the front as soon as possible.

5 June 1943 of the year, in order to destroy important military installations, 11 German fighters carried out a raid on the city of Oboyan, guarded from the sky by the guards aviation regiment, in which Jahangir served. Soviet aviation rose to meet, and Bagirov was among the fighter pilots. It was a fierce battle, Jahangir shot down two German bomber Yu-88. But the ammunition was running out. Then, in a frontal attack, he rammed the German FW-190 (Focke-Wulf) fighter. Both aircraft exploded in the sky ...

For this feat of the Guard, Senior Lieutenant Jahangir Bagirov was posthumously awarded the Order of Lenin.

Is this how they relate to the memory of heroes?

But in Azerbaijan, and more precisely in the Guba region, this hero’s memory is treated without any respect. The name of the fearless fighter pilot Jahangir Bagirov, the hero of the Great Patriotic War, who showed an incredible act of self-sacrifice, has been forgotten ...

Back in Soviet times, a park, popularly known as "Cahangir bağı", was laid in the center of Guba. In 1993, the Guba population for their money established a bust of Jahangir. After some time, under the bust of the heroic fighter pilot installed in the city park in Guba, the name of the hero was first removed, and the inscription “Unknown Soldier” was installed under the bust. Then the bust was completely removed, leaving the pedestal bare. Generally, for history the existence of the ill-fated bust to the war hero, he was repeatedly subjected to a disrespectful attitude, but he was restored again, thanks to the patient efforts of the inhabitants. But just recently, a far-away relative of Bagirov, named Tagi, told Vesti.Az that, just like 8 months, at the whim of one of the park visitors, the bust was removed again. But the people’s park is still lovingly called “Cahangir baı”.

“We were not even warned, they came and removed the bust. Why, because he gave his life for us, he is a hero. Is this how they relate to the memory of the heroes? ”He complained.

The correspondent of Vesti.Az contacted the press service of the executive authority of the Lip. The press service advised us to turn to Guba Sahib Mamedov, First Deputy Head of the Executive Office.

We also contacted Sahib Mamedov, from whom we received an "exhaustive" answer.

“I don’t know, and in general I have a meeting,” he said.

“Bagirov wept over his son’s grave, but he was against the award ...”

Researcher of Azerbaijani history, author of the book “Mirdjafar Bagirov. Unrevealed pages ”Adgezyal Mamedov, in an interview with Vesti.Az, noted that at the request of the most condemned to death, Mirjafar Bagirov, he was allowed to visit the grave of Jahangir’s son, who died a heroic death at the front. Surrounded by the convoy, the former first secretary of the KP Central Committee was led to the Patamdart cemetery in Baku. Bagirov wept over the grave of his son, hugged the headstone, and the Azerbaijani guards asked the Russian commander not to stop the convict from saying goodbye to his son. “I will not have to die on the ground where you are buried,” Bagirov sobbed.

Father sentenced to death did not take his eyes off the gravestone when he was taken away from the cemetery, ”the historian said.

According to him, they wanted to award Jahangir a hero of the USSR with a star, but Bagirov resisted, saying that it would be immodest for the son of the first secretary of the Central Committee. "How is my son different from other warriors?" On this occasion, Bagirov and the “All-Union Headman” Kalinin even had a conflict. Kalinin offered to reward his son with a star of a hero, ”said A. Mamedov.

Jahangir’s letter to his father is also interesting, in which he writes that he is ashamed to look people in the eyes, since he is young, healthy and sits in the rear. Let us cite an excerpt from his letter to his father, which he secretly transmitted from everyone through his mother, Yevgenia Mikhailovna:

"Dear Dad. For two and a half months now, after being injured, I am in the wrong place. Now, when my homeland is in danger, and thousands of my compatriots are fighting with the enemy not for life, but for death, I am in the position of an observer. And I have to be where the fiercest battles go. After all, I am your son, the son of my homeland, the Party. If you knew how ashamed I am to look people in the eyes, because I am young, healthy, and I sit in the rear. Please speed up my departure to the front. I can suffer another week, and then I will leave for the first part, which meeting, and to the front. I look forward to sending to the front and prove that your son deserves his father and country. Kisses, your Vladimir. "

In the same letter of February 4 from 1943, he writes that he does not need foreign-made vaunted airplanes, he is ready to go to the sky on U-2.

After reading the letter from his son, Bagirov summoned Mustafa Topchubashev, Chairman of the Central Medical Commission, and said:
- Did you confirm the decision of the medical examination commission about the uselessness of my son? Look at what this "unfit for service" is writing to me, and handed him a letter from his son.

After reading the letter, Topchibashev exclaimed:
- Comrade Bagirov, but your son is really unfit for the army. Is it possible to drive a plane with a wounded hand? Need to be treated for about a year. To which, Bagirov replied: - What are you, doctor, what year, if he stands a month, and that is good. I know my son, he is stubborn, all in me.

The doctor stood in confusion, and finally uttered:
- Comrade Bagirov, I cannot take on such responsibility.
“The responsibility for this will be borne by Jahangir Mir Jafarovich Bagirov himself,” the head of the republic snapped ...

A week later, M.J. Bagirov arrived at the military hospital. Having gone round all the chambers, he finally went to his son. Seeing his father, Jangir raised his bandaged arm and exclaimed:
- Father, I already recovered!

Bagirov was brief with his son:
- I read your letter. Well, I wish you to return alive, and with the Victory ....

Only this passage of the letter clearly shows us what kind of person Jahangir Bagirov was. And it is during the period when Azerbaijan is in a state of war with Armenia, we must remember such heroes and be equal to them, and not erase their names from the memory of the people. However, it is good that history always puts everything in its place. And the hero is not to blame for the fact that his father was so ...

Ctrl Enter
Noticed oshЫbku Highlight text and press. Ctrl + Enter
We are
Our memory. The power and greatness of the locomotiveGuards Major General Aslanov Azi Ahad oglu, commander of the 35 Guards Red Banner Siauli Tank Brigade
17 comments
Information
Dear reader, to leave comments on the publication, you must to register.