July 24 2013
6
Pilot Charles Jäger on October 14, 1947, made a seemingly impossible thing. On the XS-1, an experimental rocket-powered aircraft, he developed a speed of M = 1,06. It was from this historic flight that the era of supersonic began aviation. 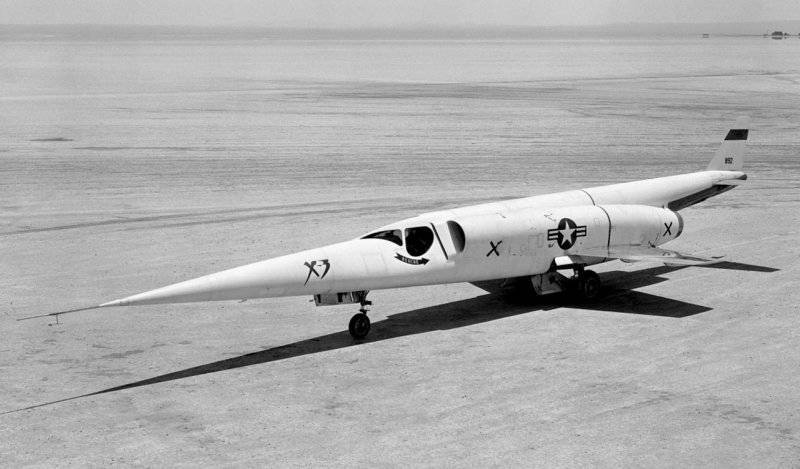 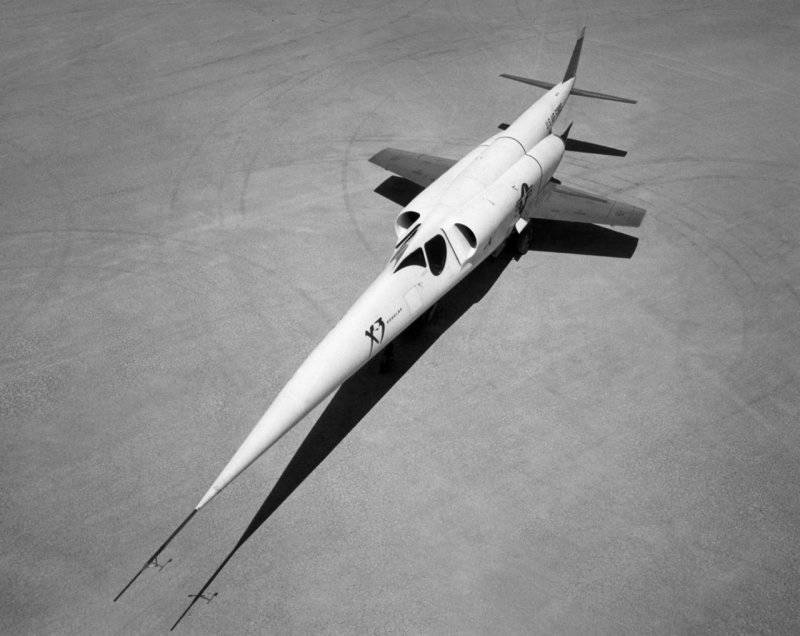 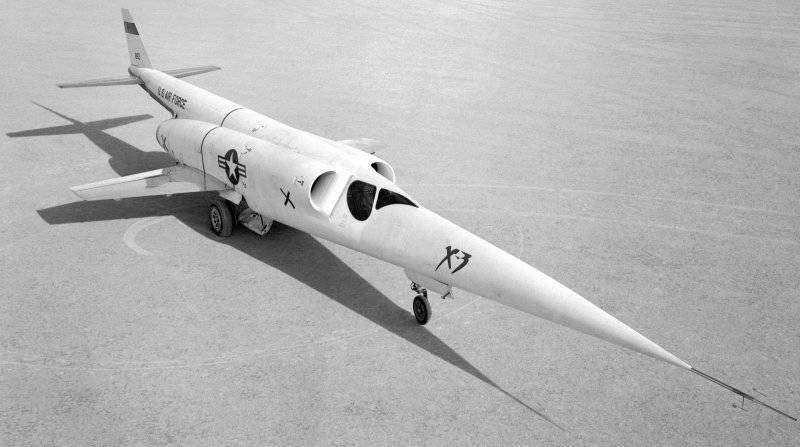 In the same year in the United States, Douglas signed a contract for the design and construction of an aircraft capable of reaching speeds of M = 2 - M = 3. It was assumed that this machine will test the latest materials and technologies created for long-term supersonic flights, investigate the aerodynamic processes during flights at such speeds, and will also study the flight characteristics of a trapezoidal wing of small elongation.

Five years of development led to the creation of an experimental aircraft called the Douglas X-3 "Stiletto". Conducting a search for optimal solutions, the company-designer investigated more than 60 variants of the aerodynamic and layout schemes of the aircraft. In addition, the possibility of using all the engines that existed at the time was investigated: turbo-jet, direct-flow jet-propellant and liquid rocket engines. Worked out as an installation separately, and various combinations of these engines. Having conducted such global surveys, the specialists selected a classical scheme of a mid-plane with a straight trapezoidal wing. As the propulsion system decided to use J46 company "Westinghouse". This installation consisted of two turbojet engines with thrust 31,14-37,75 kN.

The US Air Force had high hopes for the X-3. This aircraft was supposed to play a key role in increasing the combat power of air defense aviation. However, the hopes of the military were not destined to come true.

Already in the process of building X-3, it turned out that the propulsion system J46 did not comply with the declared characteristics. The turbines, enlarged in diameter, did not work out in this design of the aircraft, so we had to install engines that had almost half the thrust, which naturally affected the characteristics of the aircraft. There were installed J34. In November 1951, the construction of the aircraft was almost completed, however, problems with power plants caused the flight tests to be postponed for almost a year. As a result, the X-3 "Stiletto" turned into a plane, which with great difficulty reached transonic speed. The plane was able to overcome the speed of sound only in a gentle dive. In addition, the aircraft was difficult to fly, the take-off speed was about 500 km / h, and the landing was about 400 km / h, and for take-off, it needed a strip of 4000 m length. However, once the plane reached the speed M = 1,25.

The resulting aircraft is a mid-plane, made according to the classical scheme, having a straight trapezoidal wing, made using diamond-shaped profiles with a relative thickness of about 3%. The fuselage of the aircraft is distinguished by a large elongation (its length was three times the wing span) and a pointed nose, turning into a low flashlight, having sharp edges. To achieve a good flow, they donated the amenities of a pilot who sits in a slightly inclined position on the left side of the cabin. The X-3 “Stiletto” plumage is common: the keel of a small area was equipped with a rudder, the horizontal - entirely swiveling. Obviously, all controls were supplied with irreversible hydraulic boosters. Perhaps there was a yaw damper. Tricycle landing gear with single wheels is completely retracted into the fuselage. 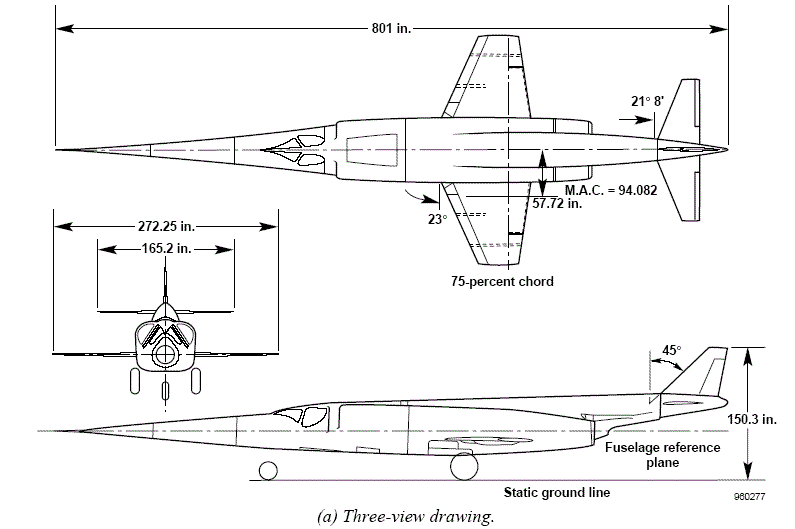 Due to the elongated front of the fuselage, an almost triangular cross section and a beam end, the X-3 Stiletto received the nickname “flying pen”.

On the sides of the fuselage was installed two Westinghouse J-34-17 turbojet engines (thrust 18,63 kN / 1900 kg) having an afterburner chamber, between which a fuel tank was placed. Air intakes are placed directly behind the cabin, at the top of the fuselage. The air intakes have gaps leading to the boundary layer from the surface of the fuselage. Exhaust nozzles extend behind the wing under the fuselage and are also adjustable.

The wing of the aircraft is trapezoidal, straight. The profile of the wing is rhomboid. Its area without the ventral part was 9,3-10,2 m². on the wing there were nose flaps, ailerons and slotted flaps, descending socks and partitions to prevent the boundary layer from falling off. For the suspension of socks and ailerons, external nodes are installed, therefore there are long fairings under the wing. Due to significant loads (about 1000 kg / m²) the wing was made of titanium with a solid cross section (minus the control channels).

The cockpit fit into the geometric contour of the middle part of the fuselage. It was equipped with a windshield with a triangular cross-section, which was made of two plates of plexiglass. The chair (shifted to the left from the axis of symmetry and slightly back) in the event of an accident, was ejected downwards. The chair was equipped with two stabilizers and a gun, to separate the pilot at an altitude of 3400 m from the chair. In the case of leaving the plane at lower altitudes, the pilot was separated from the seat after 3 seconds after the ejection. To create normal living conditions in the cabin, a powerful air conditioning system was installed on the aircraft.

Since, at the calculated flight speed, a strong increase in the temperature of the structure may occur, it has become necessary to use artificial cooling of the front part of the fuselage by means of forced circulation under the fuel skin. 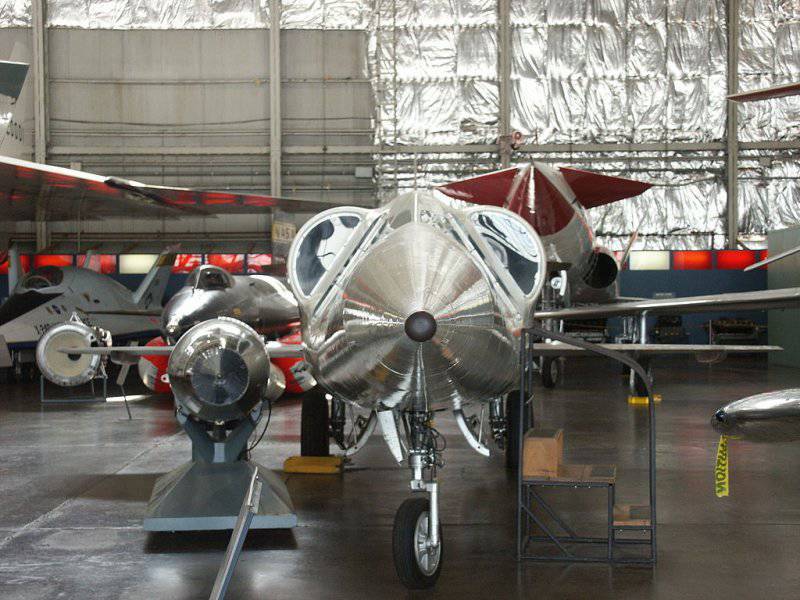 Since the X-3 was not a combat vehicle, a large number of experimental and test equipment, which was specially developed at NACA, was installed on it by the flying aerodynamic laboratory. The fuselage housed about 550 kilograms of experimental equipment, 850 had drainage holes on the surfaces for measuring pressure, X-NUMX strainers measured voltages and air loads, and covering temperatures were measured and recorded at 185 points.

It was planned to build two copies, but only one managed to complete. X-3 made the first flight of 20 on October 1952 of the year, a year later than the expected date. The tests were conducted at the airfield of Edwards Air Base. No M = 2 was already discussed, and the X-3 was able to achieve sound speed only in one flight, which corresponded to M = 1,25. Naturally, the military’s dreams of a super-chopper were broken. Tests have shown that low thrust-to-weight ratio, large unit loads on the wing and high take-off and landing speeds caused the aircraft to be extremely difficult to control, and also unsafe to operate, especially during takeoff / landing. The landing speed was 350 km / h! The pilot was not facilitated by life and a cramped cockpit and poor review. Experienced testers were invited to fly the Flying Pen, among which was the famous Chuck Iger. From 1952 to 1956, the plane made about 30 flights. NASA 1956 in the fall of the year completed tests of the X-3. All the equipment and equipment was removed from the aircraft, and the car itself was transferred to the Air Force Museum in Dayton (pc. Ohio), where it remains to this day.

This aircraft, despite the fact that it flew badly, made a very serious contribution to the development of aviation. Gained experience using in the construction of titanium. A thin straight wing of small elongation was used on the F – 104, and work related to the search for the configuration and material of chassis wheel tires that withstand beyond-limit take-off / landing speeds came in handy when developing the SR – 71. 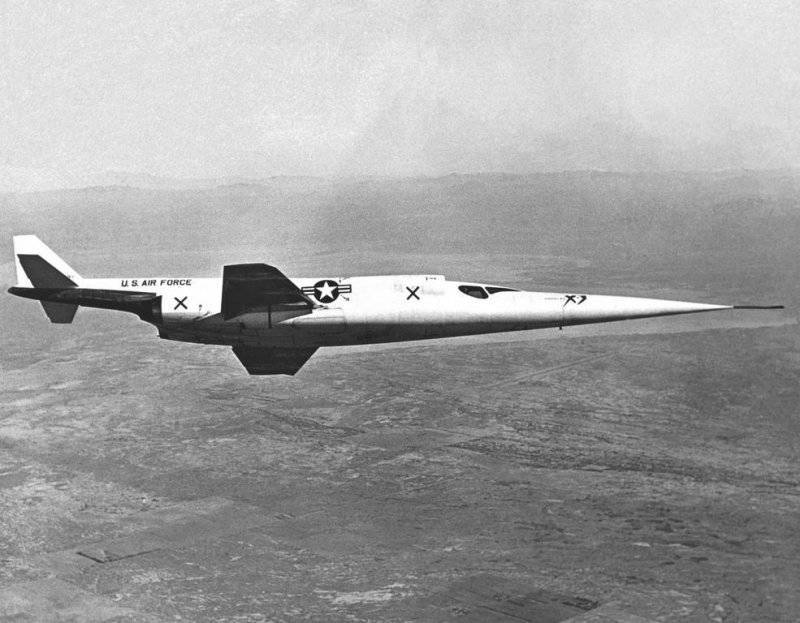 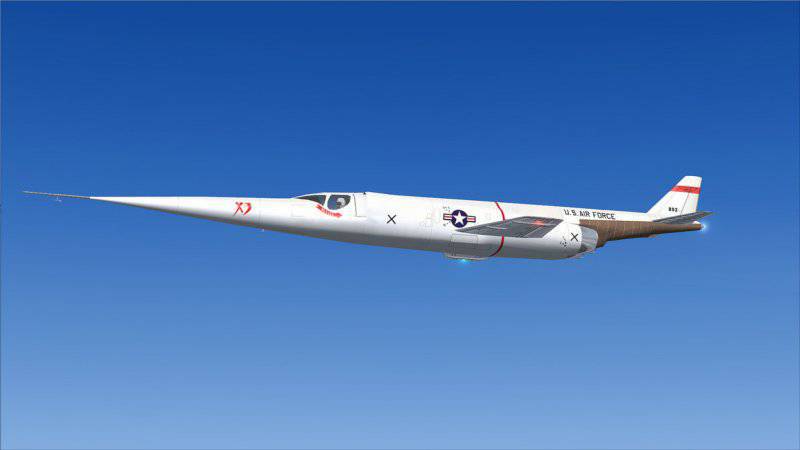 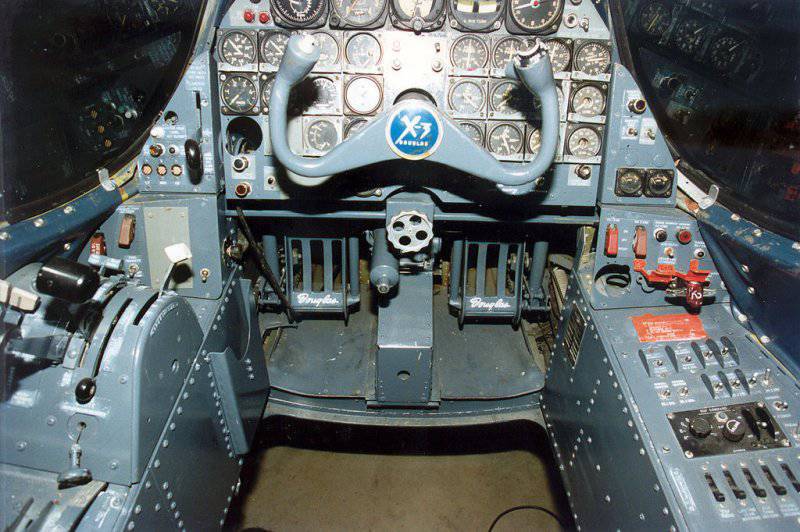 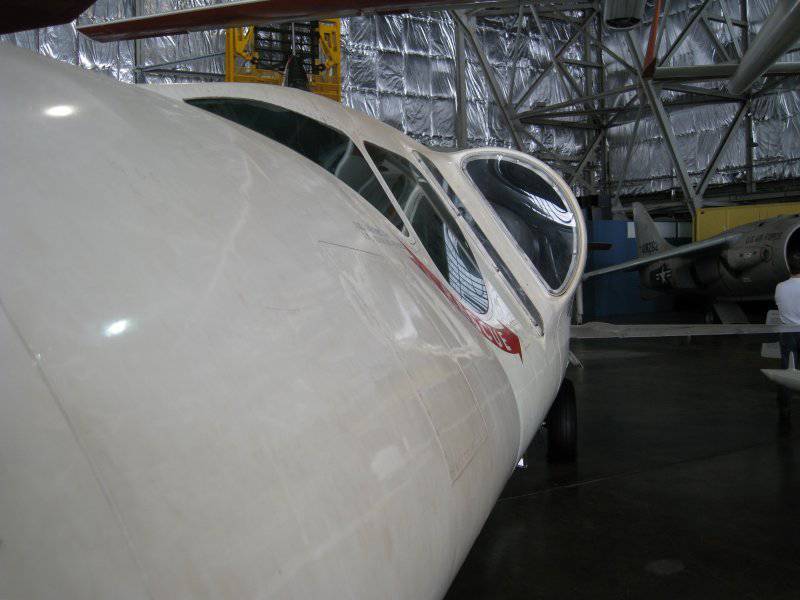 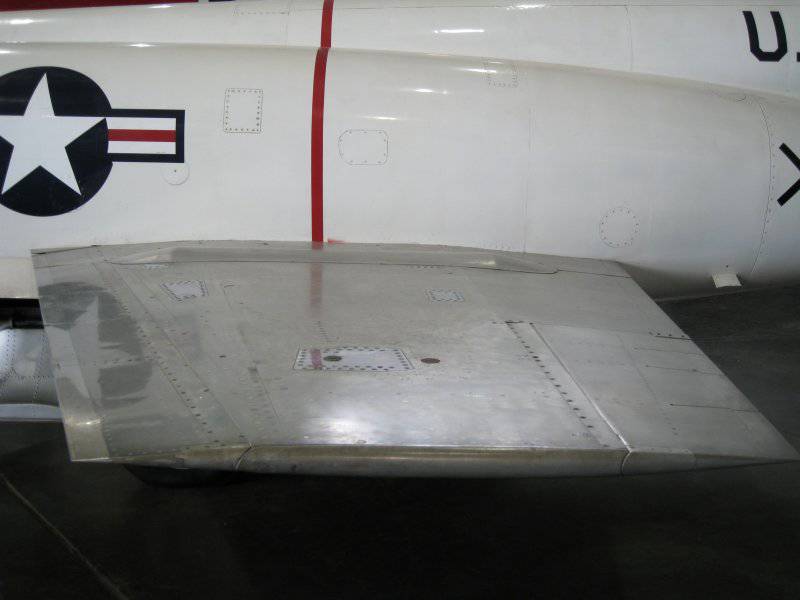 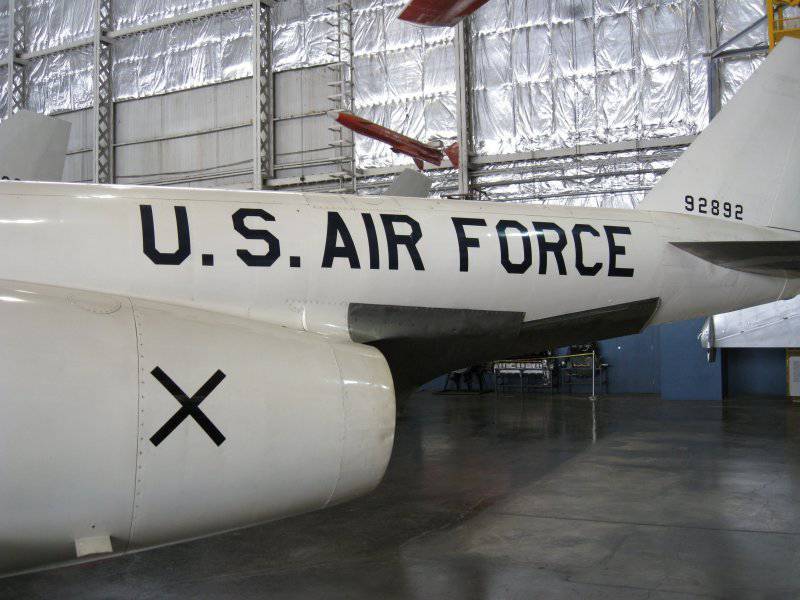 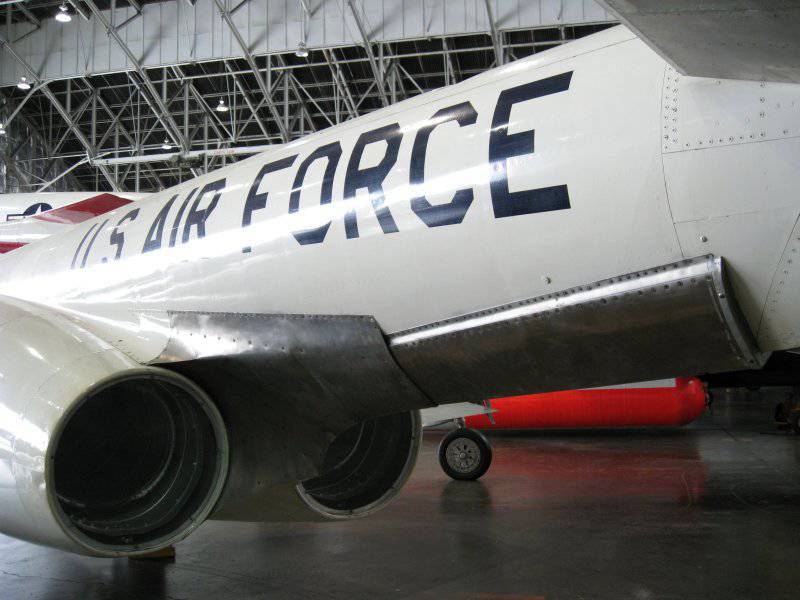 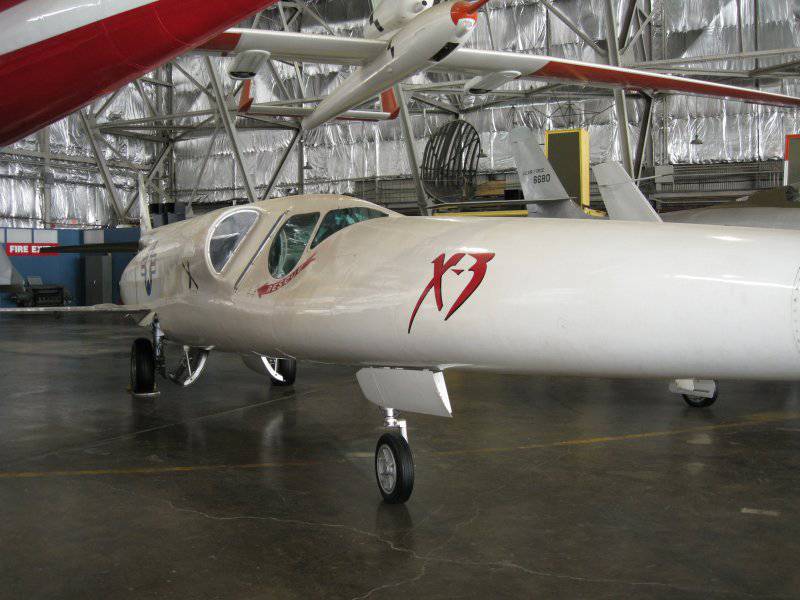