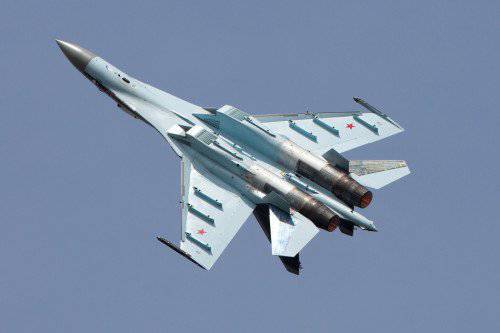 Military expert Liu Linchuan gave an extensive interview where he explained the need for China to buy Russian Su-35 fighters, mil.news.sina.com.cn reports today (The material is cited with some abbreviations - note "Military Parity").

... According to the expert, the Su-35 does not have stealth capabilities and the ability to make a supersonic cruise flight, but has super-maneuverability due to the use of 117С engines with thrust vector control. In this regard, it is superior to any third-generation fighter (meaning the fourth generation - further, the world classification system of fighter generations will be used for ease of understanding - approx. "VP").

Su-35 is equipped with a powerful on-board Irbis radar with a passive phased array. Russia claims that this radar is able to detect a target with an EPR (effective scattering area) 0,01 sq. m at a distance 90 km. The United States announced that in some angles of the EPR F-35 is equal to this value, the EPR F-22 - 0,001 square. m (the company Lockheed Martin reported the size of the front EPR fighter F-22, equal to 0,0001 sq. m - approx. "VP"). But in some countries there are reports that the EPR F-35 is 0,05 square. m, F-22 - 0,01 square. If the Su-35 radar detects targets with 0,01 radar signature square. at a distance of 90 km, then at this distance it can detect F-22 or at least F-35. Thus, the advantage of American fighters in stealth technology can be largely leveled.

Compared with the Su-27, the new Su-35 multi-purpose combat aircraft of the 4 ++ generation is equipped with engines with a significantly greater load, besides having deflectable nozzles. EDSU (electrical remote control system) Su-27 has low parameters and “poor opportunities”, Su-35 is equipped with a much more advanced digital EDSU. The upgraded fighter has avionics in the form of electronic displays ("glass cabin"), which significantly increases the pilot's situational awareness and improves cockpit ergonomics, an increased supply of internal fuel with the ability to mount external fuel tanks significantly increases the range and combat radius. In addition, the Su-35 is equipped with the latest EW systems. In contrast, the Su-27 has insufficient capacity for striking ground targets, which significantly limits the flexibility of its combat use.

China is very interested in obtaining 117 engines, it will be an additional benefit for us. Russia will not supply these engines without Su-35, it must be understood. China still needs Russian engines and no need to look down on them.

There is also a great interest in the Irbis radar. At present, China has already mastered the technology of creating a radar with an active phased antenna array (AFAR), but this does not mean that we refuse to look at foreign developments. “Irbis” has unique things, first of all advanced software algorithms. Often, the Russian equipment is made very rough, but has good performance characteristics. Getting to know “Irbis” will help us understand the development of key technologies in this area, we must find out the strengths and weaknesses of foreign developments in order to make our systems better.

In the arsenal of the Su-35 there are long-range missiles with ramjet engines (ramjet). We are also developing such rockets, but why not look at other people's designs, if there is such an opportunity?

Could Su-35 upset the balance of power in Northeast Asia? China pursues an independent foreign policy and does not threaten anyone. We are experiencing the J-20 fighter, it also does not threaten the military balance in Asia. However, some countries are invading Chinese territorial waters. Japan has a flawed mentality, and all the time declares a Chinese threat. This country is characterized by cringing before Europe and America, disrespect for Asia and contempt for China. This mentality persists.

China buys Su-35 because in the development of our promising fighter J-20 and J-31 there were big problems? The acquisition of the Su-35 is necessary for the fastest growing power of the PLA Air Force, as there are serious reasons for the occurrence of a major war with Japan. In the development of fifth-generation fighter aircraft, China is going step by step. Soon J-20 will receive new engines with thrust vector control, will acquire super-maneuverability and cruising supersonic. By its characteristics, it certainly surpasses the Su-35.

J-31 has a less powerful radar than Su-35, simply due to the fact that the area of ​​the antenna field in the nose of this fighter is smaller, but such a requirement is not put. In the future, the fighter will receive more powerful engines and will be able to make a supersonic cruising flight.

Tests of a new fighter take an average of six years before it enters the military aviation. Of course, we will intensify the schedule of test flights, using new prototypes. But this time cannot be drastically reduced, this is the law of science. Some inhabitants believe that once a fighter took off, they should adopt and criticize the “intellectual patriots,” who are better versed in technical issues.

Perhaps the Russian fighter T-50 PAKFA technologically advanced than the J-20 and, of course, better than the Su-35. But this fighter is still immature, is being tested, still not tested weapons. If we buy or join the T-50 program, we will lose independence in this field of armaments. I am sure that the choice of the Su-35 was correct, and to a certain extent it will be able to resist F-22 and F-35.

Objectively speaking, stealth gives a great advantage in air combat, the main thing is that the enemy’s detection range decreases. The F-22 is capable of flying on a cruising supersonic, thanks to which its six air combat missiles have a higher initial velocity, the US Air Force relies on long-range missile strikes, but the Su-35 will be a serious contender.

In the super-maneuverability of the Su-35 there is a big combat sense. Many experts believe that the Cobra maneuver performed by the Su-27 fighter has no practical use in aerial combat. The engines of this fighter do not have a controlled thrust vector; in the event of a rocket launching or firing from a cannon, the plane may lose controllability and break loose into a tailspin. Therefore, we still have not seen how the Russian Su-27, using this maneuver, use weapons. Before performing the Cobra, the aircraft should reduce speed to 400 km / h, which is significantly less than the high subsonic speeds that are commonly used in air combat. It will take time before the fighter returns to performing energetic maneuvers and picks up the necessary speed, so on the Su-27 the advantages of this maneuver cannot be fully utilized. Another thing Su-35, equipped with much more powerful engines. The presence of thrust vector control allows the fighter to not rely on traditional aerodynamic controls, which are ineffective at such speeds, there is no threat of disruption into a tailspin, which will allow the aircraft to launch rockets and fire a cannon. Thus, the excellent maneuverability and controllability of the Su-35 will allow you to effectively use this maneuver in aerial combat.