The question of the construction for the Russian Navy of an amphibious assault ship-docking ship (DVKD) of this type has been resolved politically. Expediency and necessity are no longer discussed. The contract entered into force a long time ago and is being executed by both parties - France and Russia.

Despite the fact that the decision to purchase two ships of this type was made under the former Minister of Defense, no one from the current leadership of the country, the Defense Ministry or USC decided to abandon their construction. On the agenda are new issues on the ship and the whole contract. In particular, attention should be paid to the training of a qualified crew and repair base, the supply of spare parts, components and weapons throughout the entire life cycle. Other important issues in the fate of Russian DVKD will be the definition of the role of such ships in the Russian Navy system, basing sites, as well as the preparation of facilities necessary for the operation. 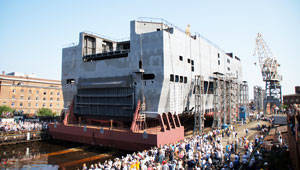 I would not want the new DVKD repeated история the first domestic aircraft carrier type "Kiev" project 1143 "Krechet", however, as the subsequent cruisers of this type. As it is known, when “Kiev” came north to the place of permanent base, nothing was ready for its normal operation. There was no equipped berth, and the ship was anchored in the bay, where he spent the lifespan of many systems and mechanisms. Then "it turned out" that the crew of the ship and family members did not have housing. Together with the air regiment, more than 2000 people arrived from the Black Sea. There were many other costs, the solution of which could have been foreseen.

The operation, role and place in the domestic Navy of large landing ships are also unsatisfactory. This primarily relates to the first rank BDK of the Ivan Rogov type, project 1174 Rhinoceros. These ships in terms of armament and purpose were close to the Mistral type of air defense missile system. They also had aviation armament, the basis of which was Ka-29 transport and combat helicopters, which are also supposed to be based on the Mistral type of airborne missile defense. BDK type "Ivan Rogov" equipped with a docking camera for landing assault facilities. In addition, traditionally for domestic BDK ships were equipped with a ramp of complex construction for landing, equipment and cargo right on the coast from shallow water. In the 80s, domestic industry built three ships of this type. But they practically did not show themselves in any way and were quickly removed from the Navy.

As practice has shown, in particular, the latest events around Syria, the most popular amphibious equipment of the Russian Navy are the BDK projects 1171 and 775 (775М), which were and are currently the "workhorses" of our Navy. Even the new Ivan Gren of the 11711 project may be difficult for our sailors, not to mention the Mistrals.

According to official information, the contract signed in 2011 between DCNS and Rosoboronexport OJSC envisages the construction of two Mistral type FCCDs with adaptation to the needs of the Russian Navy and the provision of related logistics services at the initial stage, training of the first two Russian crews and technology transfer. 11 November of the same year, the contract entered into force. The general contractor is the DCNS group, the construction of ships is carried out by its partner, STX France, with the participation of Admiralty shipyards belonging to USC. At the request of the Russian side, the initial draft has been substantially modified.

The design of both ships was jointly developed by industrial enterprises of the two countries for Russian conditions with the aim of using Ka-29 and Ka-52K helicopters, providing navigation in winter conditions and installing onboard domestic equipment and weapons. For example, the layout of the communication system was determined jointly by Inteltech, Thales and DCNS specialists in a separate working group. On the components of the combat control system, the DCNS group actively cooperated with the Morinformsystem-Agat concern. February 1 2012 th metal cutting began, and on February 1 of the current year, the Vladivostok DVKD was laid out on the stocks. Installation on the stocks of "Sevastopol" was held recently - 18 June. The launch of the fully formed first hull is scheduled for October, and the transfer to the Russian side of the finished ship is scheduled for 2014 year. "Sevastopol" will give a year later.

In the middle of June of this year, during a visit by Deputy Prime Minister Dmitry Rogozin to the shipbuilding industry enterprises, for the first time the stern portion of the Vladivostok DCVD building under construction at the Baltic Plant was shown to journalists. As builders said, this is about 40 percent of the entire hull. 26 June, the Baltic Shipyard launched it. The total length of the ship - 199 meters, width - 32. Flight deck level 27. Draft at a displacement of 22,6 thousand tons - 6,42 meters. The maximum speed with a given draft is the 18,5 node with the full power of the azipod engines (3,5 megawatts). Crew - 177 man, landing group and control group - 481. Part of the hull, built at the Baltic plant, has a length of 94 meter. Its trigger weight is 6,4 thousand tons. In addition to the body painting works, the plant partially saturated the body with pipelines and equipment. The plant has established foundations for propeller steering columns, aft and side ramps, lifting platforms for helicopters, an ammunition hoist, and a hangar hangar gate. Equipped with ballast room space, mounted towing and mooring equipment for transporting the hull in Saint-Nazaire. All the hatches and doors provided by the project were installed, electrical equipment was installed (cable trays and foundations for electrical appliances). The hull was saturated with ballast, waste and fire system pipes. The total length of the pipe is about five thousand meters.

On July 4, the act of transferring to the French side of the aft section was signed (contractor - USC, customer - STX France). The contract was initialed by the representative of the manufacturer. On the same day, the Baltic Plant officially began construction of the aft part of the second helicopter carrier. This was announced at IMDS-2013 by the general director of LLC Baltic Plant - Shipbuilding Alexander Voznesensky.

On July 6, at 18.00, a Dutch ocean tug En Avant 20, accompanied by two ships of the St. Petersburg seaport, delivered a stern to the navigation dam No. 1 of the Petersburg dam and began its journey to Saint-Nazaire. The arrival of the stern was scheduled for July 25. Next, it is attached to the nose, built in France. The partners highly appreciated the works performed by Baltiysky Zavod - Sudostroenie in the agreed time and with high quality of work, the official representative of USC, Alexey Kravchenko, reported.

To date, the main approvals for equipping ships have been completed, but the composition of the DVKD’s weapons have not yet been precisely defined.