Liberalism - a deadly threat to the demography of Russia

July 24 2013
54
Everything is relative. It would seem a simple truth, as old as the world. Meanwhile, in fairly serious issues that affect the self-perception of an entire people - the people of Russia, for some reason, journalists and ministers do not adhere to this simple principle.


But it's so simple - he gave information, told him the state of affairs compared with the situation of the same affairs with his neighbors. And everything will immediately become clear.

But neither the ministers nor the “independent journalists” of this simple thing do what makes you think about their competence, conscience and even the mind. 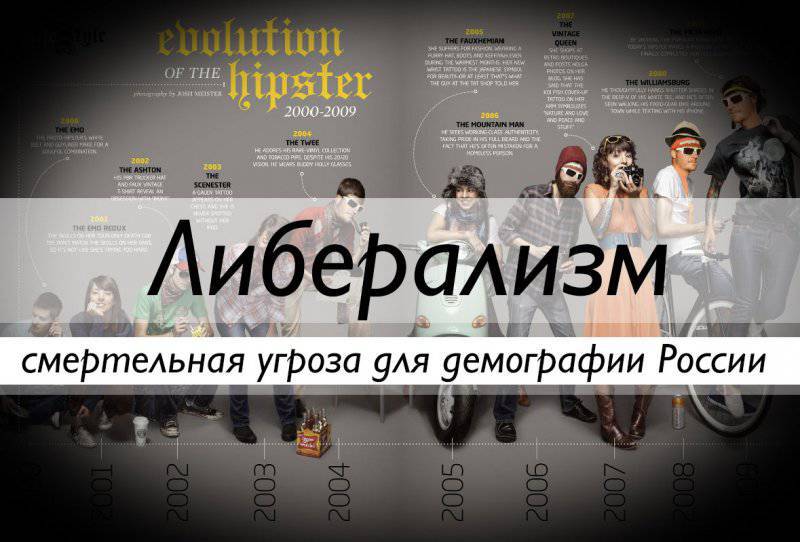 In early July, the Deputy Minister of Labor and Social Protection, Alexei Vovchenko, talking about the demographic situation in Russia, said a few facts that all “independent media outlets” happily quoted. Virtually no comment.

Why? Because, by itself, the information of the Deputy Minister of Labor and Social Protection fits perfectly into the concept of “everything is lost”, so beloved by “independent journalists”. But if you comment on it, if you compare it, then all its “charm” can disappear and pour another portion of the negative into the head of the Russian population.

So what was it about?

"The latest statistics show that every eighth Russian, as of today, is older than 65 years, reports RIA"News". “Now the urgent problem that awaits us is that today we have 13% of Russians older than 65 years - the population is aging,” said Deputy Minister of Labor and Social Protection Alexei Vovchenko. He added that according to international criteria, a country's population is considered old if the proportion of people at 65 age and older exceeds 7%. “The number of people older than working age in Russia has been constantly growing since 2006, and by the beginning of 2012, 32,4 made up a million people, or 22,7% of the total population. The number of persons older than working age today is 8,9 million people more than the number of persons younger than working age, "said Vovchenko."

What will understand the ordinary citizen of Russia, whom the “independent media” will gladly acquaint with the words of the Deputy Minister of Labor and Social Protection, Alexei Vovchenko.

Darkness. Soon, only pensioners, grannies and grandparents will live in our country. It is clear that a country in which “some old people live” has no future.
What conclusions will make a citizen of Russia from this information? Only negative - again, everything is bad, and in the very head of the field - demography. Constant injection of the negative can give up to the most mentally stable person. Is it not because of this that the “independent media” will always gladly tell such information, but rarely, with difficulty and with difficulty will they say something positive:

Let's do something that the Deputy Minister of Labor and Social Protection, Alexey Vovchenko, and the crowd of “independent journalists” cannot think of with his own mind.

Let's compare the data that was voiced. With the data of those countries, which all time decided to rely.

And what about “civilized countries”?

Now we will do the final work for the “deputy minister” and “independent journalists” - we will show them how to properly and honestly present this information:

In passing, we note that according to the information from the same article of the “Expert”, by 2032, the population of Japan will decrease by 20 million. This immediately - to the question of the potential reduction of the population.

Summarize. We must understand that neither the liberal deputy minister, nor the “independent journalists” will ever tell us.

Ctrl Enter
Noticed oshЫbku Highlight text and press. Ctrl + Enter
We are
What you didn't want to know about EnglandThe West without the USSR: the world goes to an ideological explosion
Military Reviewin Yandex News
Military Reviewin Google News
54 comments
Information
Dear reader, to leave comments on the publication, you must to register.