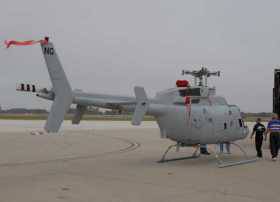 The US Navy received the first upgraded Fire Scout MQ-8C unmanned helicopter, the Northrop Grumman development company said. Unlike the previous model MQ-8B, created on the basis of a specially designed glider, the new MQ-8C rotary-wing unmanned aerial vehicle (UAV) is based on the glider of a commercial Bell 407 helicopter equipped with a modified control system.


The MQ-8C UAV is currently preparing for a ground and flight test program. Until the first flight at the command range aviation systems of the US Navy will be tested the communication system of the device with the ground control station. In the course of the upcoming tests, the MQ-8C must be confirmed to meet the operational requirements. fleet.

The new device has three times the mass of the payload and two times longer flight duration compared to the previous version of the MQ-8B. As part of the MQ-8 unmanned system, not only the advanced MQ-8C device will be used, but also proven software, avionics, payloads and auxiliary ship systems from the MQ-8B device.

The Fire Scout MQ-8C advanced UAV was created to meet fleet requirements for flight duration and range, as well as the need to increase the payload mass, which will effectively accomplish observation and reconnaissance tasks in the interests of the naval and land command.

Currently, the MQ-8B UAV is used by the US Navy with frigates, as well as in Afghanistan as part of the Marine Corps units.
Adoption of the upgraded rotor-wing unmanned MQ-8 system with the new MQ-8C Fire Scout is planned for 2014 year.