Why overthrown Mursi, or the collapse of a failed jihadist

July 24 2013
17
of the latter, News it is known that Egyptian policemen established order in Tahrir Square, where Mr Mursi’s supporters and opponents tried to confront each other. The order was not easy for the police in the literal sense: they had to introduce armored vehicles to the square, not to mention tear gas. Seven Islamists were detained, including armed ones. In addition, the press is full of reports of Mursi's “disappearance” - his family is going to appeal to the International Criminal Court with a request to investigate the “abduction”. Against this background, materials appear in the media about why President Mursi was overthrown. 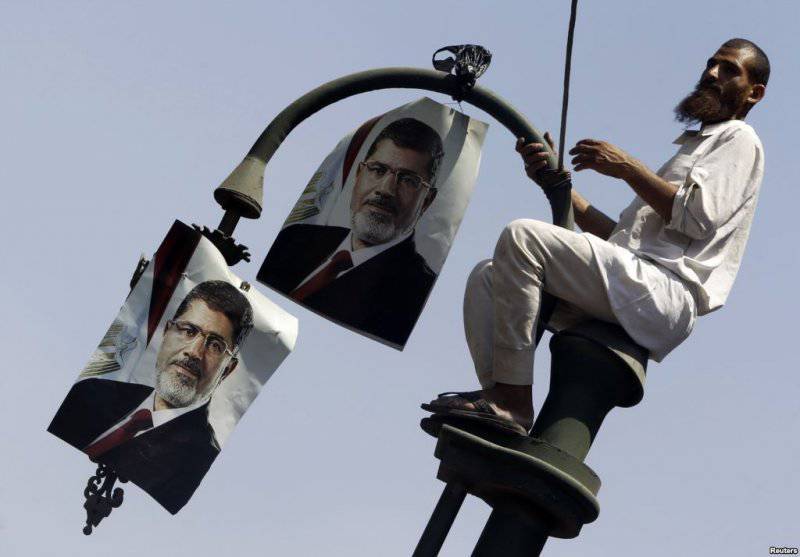 Tahrir eliminated unrest. The police introduced armored vehicles to the square, with the help of which barricades were erected between rival supporters and opponents of the ousted president. The retreating Islamists retreated to the University Bridge overlooking the Giza Square in front of the university: the Muslim Brotherhood rallies have been held there for several weeks, they note "Vesti" with reference to ITAR-TASS.

In the afternoon of July 22, hundreds of supporters of M. Mursi tried to break through to Tahrir, but they faced resistance from political opponents. The Molotov cocktails, stones, and then the shooting began. The police used tear gas and called in the military. There are reports of three dead. Police arrested seven Islamists, two of them had gunshot weapon.

According to Vesti, the unrest continues in Qalyub (northern suburb of Cairo). The Islamists started everything: the Muslim Brotherhood blocked the highway to Alexandria. In order to restore traffic, hundreds of locals took to the road. The Islamists retreated to the outskirts.

According to "Lenta.ru" With reference to Reuters, the family of the ousted President 22 July said it was going to file a lawsuit against the military, who "kidnapped" him. “There are no legal or constitutional grounds for detaining someone who is not accused of committing crimes for his own safety,” said the son of ousted President Osama at a press conference. He added that the Mursi family will take legal measures "in Egypt and internationally" against Abdel Fattah al-Sisi, the Egyptian defense minister, who announced the removal of the president in early July. Osama added that Mursi's relatives cannot contact him and know nothing about his state of health.

"We will appeal to the International Criminal Court in order to conduct an investigation into the abduction of my father, who has been held since July 3," - said Osama newsru.com with reference to RIA Novosti. The youngest son of the ousted president emphasized: “Until now, the whereabouts of the president, my father, are unknown to me. We do not know where it is contained. We don’t know the reasons for his detention. ”

The daughter of the former president, Shima, said at a press conference: "What happens to the father, the lawfully elected president of the country, is a complete violation of the norms of the law."

There were voices from the West.

White House spokesman Jay Carney said at a press briefing that the United States was calling for a halt to any arrests and detentions for political reasons. He clarified that this also applies to Mohammed Mursi, who should be released from house arrest. To this, Mr. Carney added that Washington’s talks with the transitional authorities of Egypt are taking place every day. One of the topics of the talks is the security of Mursi and ensuring the rule of law, according to "Vesti" with reference to ITAR-TASS.

Release the dismissed president and hold democratic elections in Egypt and called on the European Union. This is stated in a statement adopted following the meeting of EU foreign ministers in Brussels, reports RBC with reference to Reuters.

"Egypt must move quickly towards a democratic inclusive process, which includes holding democratic elections in the near future," the document says.

It must be recalled that Mursi was overthrown for a reason, according to the revolutionary Egyptian habit, and after Mubarak. Firstly, the sharia, Islamization, which began even before the drafting of an Islamist constitution, was rightly blamed on the failed president. Secondly, M. Mursi was not able to please the Egyptians with economic growth - on the contrary, when she fell, the president began to beg from the IMF. Thirdly, not isolated groups of democratically-minded citizens came out against the “Pharaoh”, but millions took to the streets. In general, Mursi and his office were what should be called an illegitimate government - that is, a government that the people do not trust.

There is another reason why Mursi did not like the Egyptian people, in particular, the military. It is known that as president, he fiercely advocated "jihad" in Syria. Coming out after the election of the Muslim Brotherhood, the wolf simply dressed up in sheep's clothing.

As Dr. Webster G. Turpley notes (Press TV, Iran; source of translation - Mixednews.ru), Mursi’s aggressive intentions regarding Syria, along with mass demonstrations, convinced the military leadership of the country that the incompetent and unpredictable Mursi, who destroyed his own popularity by bending under the requirements of the International Monetary Fund, is nothing more than a threat to Egypt.

According to the Washington Post, the Egyptian military’s discontent, “as former military officials said, peaked in June when Mursi twice supported calls from officials from his entourage for Egyptian aggression against Ethiopia and Syria, which was fraught with Egypt being drawn into conflicts, which he could hardly afford. ”

Dr. Terpli focuses on the fact that Mursi’s call for holy war against Bashar al-Assad sounded just three days after the US Secretary of State attempted to launch a proposal for the immediate bombing of Damascus at a meeting of the US government cabinet. True, Kerry was forced to be content with the option of arming the Syrian terrorist opposition. Many observers concluded: the Egyptian president pursued a foreign policy in line with the US anti-Syrian strategy.

The “beginning of the end” of the president of Egypt is attributed by the author to the middle of June. It was then that Mursi attended an Islamist conference "in support of the Syrian uprising" in Cairo. There, Mursi announced: “We decided to close the Syrian embassy in Cairo. The Egyptian ambassador to Damascus will also be recalled. The people of Egypt and their army will not leave the Syrians until their rights are recognized and the new leadership of the country elected. ”

According to the Irish Times, “at a rally of 15 on June, Sunni Muslim clerics used the word“ infidels ”to condemn both Shiites who defend with arms in the hands of Syrian President Bashar al-Assad and non-Islamists who oppose Mr. Mursi inside country. Mr. Mursi himself called for foreign intervention in Syria against Mr. Assad ... ”

The military leadership of Egypt was alarmed by the thought that Mursi would try to deploy Egyptian forces against Syria. According to the same “Irish Times”, Mursi’s militant threats led to “a veiled rebuke from the army, which issued a seemingly neutral but tough statement the next day, emphasizing that the only role of the army is to protect the borders of Egypt.”

Analyst of the International Crisis Group Yasser el-Shimi stressed that, if we take the point of view of the military, with his performance at the Syrian rally, M. Mursi crossed the “red line of national security”, inciting the Egyptians to fight abroad and thus threatening to create a new generation of jihadists.

The reason that could justify the military coup in Egypt, says Terpli, is the need to avoid embroiling the country in a disastrous war abroad. The 6 April Left Movement (“Democratic Front”) expressed the view that Mursi is acting as a tool for the US anti-Syrian campaign. According to representatives of the movement, “the decision to open the way for jihad comes from Washington,” and its sponsors are Salafist sheikhs. The Association of Anti-Mursist Forces "Tamarod" added that "Mursi’s speech reveals that the Syrian case was transferred from Qatar to Saudi Arabia and Egypt, and Mursi is guided by American directives."

It is not surprising, therefore, to add from yourselves that the voices, now demanding the release of Mursi, come from the West. This is just another confirmation of the fact that the Islamist president, close to Salafist circles and radicals in general, carried out the directives of the CIA and the State Department. While the Egyptian military declares that M. Mursi is hidden for his own safety, Washington and Brussels in the same choir with Osama Mursi scream about human rights, the International Criminal Court and ensuring the rule of law. And none of them do not care about provocations organized in Cairo by armed Islamists - supporters of the former Muslim brother Mursi.

By the way, comrade Mubarak offered Mursi to leave voluntarily - to follow his example from 2011 of the year. But the president did not agree: until the very end he did not believe that he would be "gone." They could not change his decision to remain in office and the advice of the American mediator from the “one Arab country” (he recommended changing the Cabinet and thinking about a new constitution), which also prove the US desire to keep the Islamist in power - for the sake of expanding the terrorist front against Assad. However, Mursi persisted in his delusions. Probably, this person was so imbued with the ideas of jihad that he did not take into account either the “incomplete” loyalty of the military, or multimillion-dollar popular protests in the country. Salafist sermons finally eclipsed his mind.

Observed and commented on Oleg Chuvakin
- especially for topwar.ru
Ctrl Enter
Noticed oshЫbku Highlight text and press. Ctrl + Enter
We are
Not the president, not the PharaohUAVs manipulate lives in Gaza
Military Reviewin Yandex News
Military Reviewin Google News
17 comments
Information
Dear reader, to leave comments on the publication, you must to register.