The guy said the man did 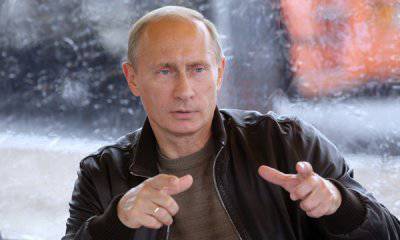 Everyone well remembers Putin’s words at the dawn of his presidency that in his actions against terrorism and terrorists he will be guided by the only correct and effective means: “To wet! wet even in the outhouse! ”Many blamed it on the young presidential PR, others took all these words without due seriousness ... But - in vain!


We should not forget that Putin was festered by the old school of the Soviet KGB, where methods of eliminating the enemy on the territory of other countries were perfected, and it must be admitted that in many respects the fear of a foreign citizen before the “long arm of Moscow” was not unreasonable, exaggerated by Western ideologists in order to avert the “bright democratic face” of their citizen from the gloomy and hostile reality of the USSR. A good tradition to declare to the fugitive dissidents with Alpenstock in the right hand was laid by Stalin eagles and successfully cultivated in all subsequent years. And it formed its share of fear in the western man in the street and gave the Soviet Union good dividends in the geopolitical confrontation of the socialist camp against the capitalist one.

These methods and this image worked for the benefit of the Union for many years and began to be handed over just from the first years of perestroika, and over time, as they say, “the people have completely lost their fear”, i.e. every Western in the West or pro-Western mongrel in the post-Soviet territory strived to bite with its sharp-jawed mouth of a giant stunned by perestroika. All human rights activists screamed in the marketplace, recounting the bucks from Western sponsors in their pockets, started talking about the oppression of national princes, casting shadows on the fence and pursuing only one of their holy goals - to get their hands on unlimited personal power and, of course, money. In this situation, the impotence of the then central government and the nationalist ambitions of the republican governors who got the exit, the scumbags who imagined themselves the masters of Russian politics appeared. And it should be noted, they almost succeeded in proving it ... Until he appeared in the office of the President of Russia, the KGB colonel Putin appeared and did not say, “Bass! Brosomed and - will be! And whoever did not understand, we will drench him ...! ”And as subsequent years and events have shown, he doesn’t disagree with words. This is - time. The process of plundering Russian resources will be stopped and these resources will begin to bring dividends to Russia itself. This is two. Russia will force the whole world to respect its opinion and its position. These are three.

As you can see, almost all of this is happening before our eyes, and you and I have an excellent opportunity to see with your own eyes how the most odious and arrogant business leaders, who view Russia only as their gold mine, write memoirs in places not so distant or they were silent in their villas abroad (if only they would not be remembered!), or they are forced to conduct their business taking into account the interests of Russia and share their incomes for the benefit of Russia.

The Syrian epic has very visibly demonstrated to everyone on the planet who is who - who really lives by the law, and who put this law on the law with the device, but at the same time does not get tired of teaching law-abiding everyone around. The whole world saw and understood who really treats with respect and truly appreciates international law, human life and citizen rights, and who, hiding behind the incessant chatter about the supremacy of all the above principles, these principles simply cherit in order to please their ambitions, and sometimes just by virtue of its perverted logic. In light of recent statements by Western politicians that the West has already admitted defeat in Syria, information that Assad has already appealed to the Russian leadership for a loan to rebuild the economy, information from the media that Bashar Asad has already appointed municipal leaders for the liberated territories and measures are being taken to restore the infrastructure of settlements, it is perfectly clear that the Syrian events are developing according to the scenario “which the doctor prescribed” i.e. Vladimir Putin.

And the fact that Russia and the Russians have become respected in the World is a fact, guys. Watching on TV a report about the triumphant return of our guys from international competitions in France in fire-applied sports, from one of our guys proudly heard that during the performance of our team, all those present at the stadium were “sick”! And the triumph of our paratroopers in Belgium on a four-day pedestrian marathon ?! Song! Only for our children, the Belgian orchestra played a welcome march. And to all - the case described in the article "Putin is changing the brains of the West" on the resource "Counter". The author of the article told how, in one of the restaurants owned by a Greek, a Russian-speaking visitor asked the owner of the restaurant “Are you Russian?”, He said that he was Russian, but now lives in one of the countries neighboring Russia. In response, the Greek advised him respectfully - “Say that you are Russian and live in Russia! This is now the coolest! ".

And with respect to those who are either out of stupidity or because of frantic fanaticism, they didn’t understand that raising their tail to today's Russia is more precious to me, I would like to remind here such an interesting fact from our recent past that echoes the beginning of this article , guys.

“In 2006, Iraq captured and later executed three employees of the Russian Embassy in Baghdad. For six years, employees of the Foreign Intelligence Service searched for the bodies of Russians. At the same time, measures were taken to find those who were involved in this murder. However, to this day, many of the circumstances of this high-profile case remain unclear.

So, 3 June 2006, officers of the SVR Fedoseev and Titov, accompanied the secretary of the embassy Fedor Zaitsev, cook Rinat Agliulin and driver Anatoly Smirnov on a trip for groceries. Their armored car stopped near a small grocery store.

When the embassy staff got out of the car, they were attacked by ten unknown masked men armed with machine guns. Titov snatched the gun, but was immediately killed by the attackers. Fedoseev tried to stop the terrorists at the entrance to the store, but was forced to lay down weaponso that his charges are not affected.

On the same day, captives were handed over to al-Qaeda representatives in Iraq. After twenty days of captivity they were executed. For several weeks, no one came into contact with the Russian government and did not put forward demands. However, 19 June appeared on the website of a certain group “Council of Mujahideen Shuras” an announcement in which they take responsibility for the abduction. And they demand the withdrawal of troops from Chechnya, as well as the release of all radical Islamists from prisons.

Naturally, these requirements were absurd and impracticable. Two days later, the Mujahideen announced the execution of hostages. They handed over a tape of footage of the murder of Russians to the Arab television company Al-Jazeera, which likes to produce such scandalous videos on the air. Vitaly Titov’s body was taken to Moscow in 2006 and buried. The remains of other members of the group for six years unsuccessfully searched for the best agents of the SVR.

According to experts, the participants in the operation, who were shadowing and seized, were professionals. When the work was done, they very well covered their tracks. Immediately after the abduction, the scouts were able to reach a woman who lived near the territory of the embassy. She noticed people who were following the building and the movement of staff. She was even able to give a description of the kidnappers. However, the next day, when the woman decided to ask a few more questions, they could not find her at home. Relatives said she went to the store, and no one else saw her. From this point on, the traces of the only witness were lost.

President Vladimir Putin ordered the secret services to find and destroy the killers of Russian citizens. For information about the terrorists was awarded a reward in 10 million dollars. A year later, Prosecutor General Yury Chaika reported that the investigation had established a circle of persons involved in the seizure of diplomats. This happened after an al-Qaida member who was serving a sentence in an Iraqi prison confessed to involvement. He was sentenced to death. Before his death, and passed his associates.

In 2008, the US military killed another Iraqi terrorist, one Mahir Ahmad Mahmoud al-Zubaydi, whom his accomplice pointed out. In 2010, a representative of the group Ahmed Salem was found and destroyed, in whose house they found photographs of execution and video materials about the contents of the captives.

“Believe me, the search for the bodies of our colleague and the embassy staff did not stop even a day after their death in Iraq in 2006. Relevant operational activities were carried out, agent work was carried out. As a result, we achieved our goal. Recently, the remains were found on the territory of Iraq and taken to Moscow, ”said a spokesman for the special services.

Oleg Fedoseyev was buried in April 2012, at Khovansky cemetery in Moscow. He was an officer of the Center for Internal Security of the Foreign Intelligence Service and was in a special unit "Barrier". His tasks included ensuring the security of diplomatic persons of the Russian Federation on the territory of other countries, working with an agent network and transferring secret information. He was supposed to provide Operation Breakthrough - the evacuation of a diplomatic mission in the event of a terrorist threat. He was an experienced agent, served in Algeria, Albania and Lebanon. Therefore, the question arises, how could such a person allow an attack?

The same source from the SVR reports: “The operation in relation to the officers of the SVR and the embassy of the Russian Federation was well planned and very clearly carried out. There is reason to believe that the officers of the SAS English Special Forces were related to it. ” This unit is similar to the group "Barrier" and performs the same function.

Eight years earlier, militants kidnapped four foreign nationals in Chechnya: the British Peter Kennedy, Darhen Hickey, Rudolf Petch, and the New Zealander Stanley Shaw. After several weeks of captivity, their decapitated bodies were found in the area of ​​the Caucasus highway. As it turned out later, two of the four killed were representatives of the SAS unit. The taken countermeasures against those who could really plan this operation did not produce results. This information is classified as "Secret".

This material was published on the REPIN.INFO resource.

Ctrl Enter
Noticed oshЫbku Highlight text and press. Ctrl + Enter
We are
Interview of V. Putin to Channel One and the Associated Press AgencyWhat you didn't want to know about England
Military Reviewin Yandex News
Military Reviewin Google News
103 comments
Information
Dear reader, to leave comments on the publication, you must to register.