FTP of the development of the Far East: 8 trillion is not the limit?

July 23 2013
68
As is known, the federal targeted program, aimed at the development of the Far Eastern macro-region, begins its work in Russia. On the “Military Review”, the theme of the development of the Far East is raised quite regularly, and we are trying to cover all the innovations that appear in the FTP. It is time for the next series of coverage of the implementation of the Federal Targeted Program in view of the fact that the innovations have once again proved themselves. 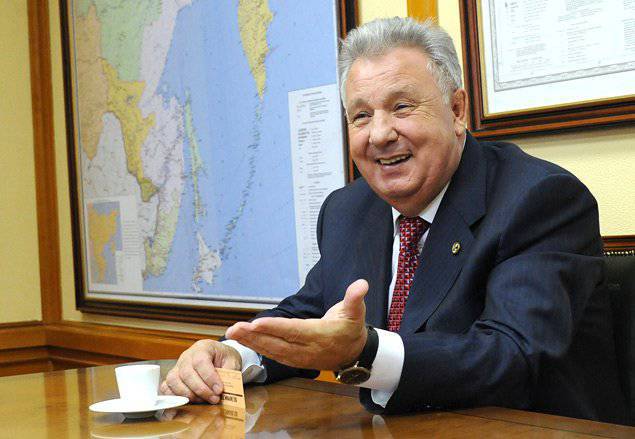 They are connected with the recent speech by the Minister for the Development of the Far East, Viktor Ishayev. This time, a federal official said that, according to the calculations of the ministry headed by him, for the full-scale implementation of the program for developing Far East into reality, it is necessary to expand the budget of the Federal Program to 7,9 trillion rubles. At the same time, according to the same Viktor Ishayev, today a whole number of projects worth a total of 4 trillion rubles are being implemented, but the ministry has other projects that need to be implemented before the 2018 year. It is for these projects that the official wants to get 3,9 trillion from the state budget.

If we talk about basic plans for which 4 trillion rubles are necessary to spend, then the construction of new railway lines within the framework of the Baikal-Amur Mainline and the Trans-Siberian Railway, which (tracks) will increase the throughput capacity of these main railways, is highlighted here. Invested money, according to the letter of the Federal Target Program, can increase cargo turnover, increase the average speed of goods on the east-west highway several times. The basic plans include a plan for the development of the Far East aviation. The main problem is the lack of air transport infrastructure in many regions of the Far East, which would allow more active development of trade relations between individual territories, as well as passenger and cargo traffic. If you believe the federal target program, then by 2018 the total number of airports and runways in the Far East and the Baikal region should be more than 60 units. The main emphasis is on the reconstruction of airfields built back in Soviet times.

One of the most ambitious projects of the program is the construction of a bridge that will connect the mainland with Sakhalin Island. Today, this bridge would allow us to give a tangible impetus to the development of Sakhalin. If we take into account that oil and gas projects on Sakhalin alone are worth hundreds of billions of rubles, then the construction of a transport infrastructure facility would be more than justified.

Initially it was planned that the object "Selikhino-Nysh" (the official name) could be put into operation in 2015 year, however, today even the officials, who often wishful thinking, decided to be more cautious in their statements about the timing of delivery of the object. A new problem that arises during construction looks in fact old and quite familiar: it turned out that the allocated funds were not enough for the construction of the object in question. This was stated by the governor of the Sakhalin region, drawing attention to the fact that the budget of the region before 2015 has already been fixed, and the funds that are prescribed in it for the implementation of this program will not be enough for this implementation.

Recall that initially the cost of the bridge between Sakhalin and the mainland of Russia was determined in 400 billion rubles. Now, according to the new calculations of the Ministry of Eastern Development, we need to raise the level of spending on 100 billions. In order to compare with something, 500 billion rubles is about a third of the adjusted budget expenditures for the construction of the Sochi Olympic facilities.

As they say: a hundred billion more, a hundred billion less ... But even if we consider that another 100 will be thrown into construction, it is not clear which project will be implemented. After all, today experts cannot agree on what will be more effective and cheaper - a bridge-bridge or a tunnel under the strait. And so far, plans to continue this branch right up to Hokkaido look completely incomprehensible.

More precisely, the plans look understandable, it is not clear who, when and at whose expense will implement them. As they say, you first give one hundred billion, and then we'll see ...

If this requires an "extra budget trillion", then it is not at all clear what function private investors perform in our country. Are they made to collect cream? What are they investing at all - exclusively in drilling new “holes” for pumping out oil and gas? Apparently, the private investor is sickened by the fact that the new transport project will begin to generate income for at least five years ... But you need a lot and at once! .. Oh, yes! Why bother to invest private capital when there is a federal budget ... Perhaps the Minister of Development of the Far East will speak, say that little money is allocated - you see, the president will cry out and throw a couple trillion more, and money bags, which often became so same state budget.

The minister made a speech ... The President after some time, you see, and wept, but not about the fact that little money was allocated for the implementation of the Federal Target Program, but about the fact that once again the expenditure of allocated funds could not be fully controlled . Of course, I don’t want to make pessimistic forecasts, but all similar programs and projects suggest that a piece of cake will definitely be stolen ... And they will steal until personal responsibility is introduced: a bridge, say, needed - build! Only if it suddenly turns out that the requested amount was not enough - you yourself leave with the wheelbarrows and picks on the highway. And let someone say that it gives some GULAGovschina, but, apparently, in the case of large construction projects in our country can not be otherwise.

If you don’t enter personal responsibility, you will soon have to give out material about how 8 trillions and 28 were asked to implement the program for the development of the Far East ... Then, according to the classics of the genre, President Putin will arrive at the facilities under construction, ask how much they spent. they will answer him: they wanted eight at first, but then they had to throw in another couple of tens of trillions. And the president will make a gloomy face and will demand to punish the guilty ... The further scenario is also known.

Summing up, we can say the following: reading the Federal Target Program on the development of the Far East and the Baikal region, pride in the country takes on the scale and solidity of the plans. But as soon as you begin to compare the numbers allocated from the federal budget and plundered on other large-scale construction sites of New Russia, the thought immediately arises: yes, when they’re already stole something ... When they say, well, enough with us - now it’s time for the country to work. When?!..

Or, maybe, the Federal Target Program for the Development of the Far East will be the first program in Russia, all allocated funds of which will be spent exclusively on its implementation - a dime past ... Faith feeds the person ...

Ctrl Enter
Noticed oshЫbku Highlight text and press. Ctrl + Enter
We are
Weekdays of the Far Eastern Federal District: Ivanovich was changed to PetrovichChess on the Far Eastern board: Putin’s Shah to Minister Ishaev
Military Reviewin Yandex News
Military Reviewin Google News
68 comments
Information
Dear reader, to leave comments on the publication, you must to register.