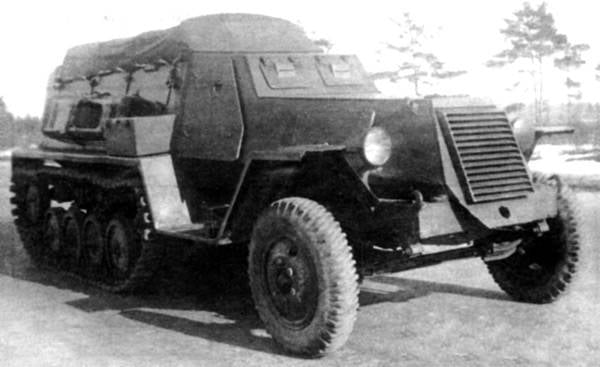 Armor protection - anti-bullet. According to the project, the welded hull had to be made of armor plates 6 and 15 mm thick, located with rational angle of inclination. On the prototype, the machine body was made of sheets of structural steel of similar thickness.

In the front armor sheet of the engine compartment, fine-strip blinds were made. For access to the power plant elements in the side sheets of the engine compartment was made on one hatch. The troop compartment had no armor roof. For weather protection, a canvas awning was installed above it. For the observation and driving of an armored personnel carrier, there were two inspection hatches in the frontal section of the control compartment, which were closed in a combat situation with armored covers with viewing slots and triplex instruments. In addition, in the entrance doors of the control compartment there was one inspection door, closed from the inside by armored valves. These hatches could also be used to fire the crew’s personal weapons.

The car was equipped with a carburetor six-cylinder engine ZIS-16 of increased power (85 hp (63 kW) at 2600 rpm) with aluminum pistons. The capacity of the fuel tanks was 150 l. The range of the armored personnel carrier on the highway reached 150 km.

The transmission consisted of: main friction (clutch) dry friction and a four-speed gearbox of automobile type, borrowed from a ZIS-5 truck, as well as a final drive with a bevel gearbox. The gearbox provided four forward gears and one gear when reversing.

The following components were used in the undercarriage: the front axle, the design of which was borrowed from a ZIS-5 truck and two automobile wheels with developed lugs, as well as a tracked drive and torsion suspension, the same as in the T-70 light tank. In relation to one side, the caterpillar propulsion unit consisted of four single-row track rollers, a steering wheel of aft location, three supporting rollers and a drive wheel of the front arrangement of the tsevochny gear with a low-speed track. The guide wheels and track rollers had external damping and were interchangeable with each other.

The car was rotated with the help of steering (borrowed from the ZIS-5 car) due to the rotation of the front steer wheels and partial braking of the track of the lagging side. A simple differential was used as a turning mechanism. When traveling over deep snow cover, skis could be mounted on the front steering wheels.

Electrical equipment of the machine was performed on a single-wire circuit. The onboard voltage was 6 B.

After conducting ground tests at the NIBT site, which showed negative results due to engine overheating and extremely low reliability of the units and parts of the machine, work on the B-3 armored personnel carrier was stopped.
Ctrl Enter
Noticed oshЫbku Highlight text and press. Ctrl + Enter
We are
Middle tanks in the postwar period. "432 Object"Wunderwaffe for Pantservaffe. Description of the design of the tank "Mouse"
Military Reviewin Yandex News
Military Reviewin Google News
18 comments
Information
Dear reader, to leave comments on the publication, you must to register.