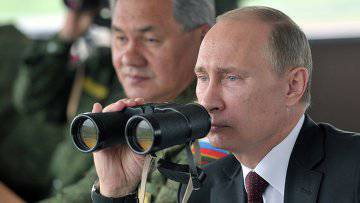 If we evaluate the events in Egypt or Syria independently of other events taking place in the world, then only one-sided conclusions can be made. Meanwhile, the fate of the Middle East will be determined by current events in the Far East, and the situation in this region is gradually heating up.


During the week, Russia holds large-scale military exercises in a region called Eastern Siberia and the Russian Far East. In Eastern Siberia, there is a Russian-Chinese border, the Far East of Russia implies a neighborhood with the Pacific Coast, the Bering Strait, and the Sea of ​​Japan. In other words, this is a geopolitically important space.

The formulation of the purpose of the exercises is always the same: verification of the operational readiness of the Russian armed forces. Needless to say, it does not mention a military play with the aim of threatening or intimidating its neighbors. However, no matter what, when conducting such large-scale inspections, it seems unlikely that they carry a peace-loving message.

The Russian army, starting with the 1998 year, headed for accelerated modernization. From 2011 to 2020, about 470 billion euros are expected to be spent on military needs and to upgrade military equipment by 70%. Updated connections are deployed in the Far East of Russia; In the Pacific Ocean, the multipurpose nuclear and other nuclear and diesel submarines, commissioned in 2012, are based. Recall that Russia is not the only country that has a super-modern nuclear submarine in the Pacific; the ocean is boiling.

It is difficult to say whether nostalgia for the former Red Army persisted in Russia, but the power achieved today and the form of its presentation through exercises makes us think about nostalgia for the years of the Cold War.

It is important what one-by-one checks say to neighboring countries and the world. However, another issue that is at least as significant is the large-scale and powerful control of the army. Putin stated that the purpose of the exercises is also to check the progress of combat missions. If the Russian leader is worried about the restoration of Russia's former influence, it is necessary, on the one hand, to strengthen the armed forces, and on the other, to control this gaining army.

It can be assumed that the teachings primarily imply a threat to China. Although an agreement was concluded between the two countries in 2004, and Russia shared information about the exercises with the People's Republic of China, and also held joint maneuvers called “Sea Interaction - 2013”, the current exercises held extremely close to the Russian-Chinese border of 4300 kilometers, possibly worry Beijing.

At the same time, it seems more rational to assert that the message of the exercises is in fact addressed to Japan and the USA, since their most active phases are conducted in the Sakhalin and Kuril Islands region. These islands belonged to Japan, but following the results of the Second World War, they moved to Russia. Japan wants to return the islands, and Russia - to "sell." And he calls such a high price that Japan is unable to buy them; besides, she does not want to pay for what belongs to her.

Another dimension of the issue is Russia's military focus on the Japan-South Korea-US axis. If we add the Bering Strait to this puzzle, we can assume that the teachings are sending almost a direct message to the United States.

Russia clearly decided to return to the zones of former influence. It will not leave either Syria, or Central Asia, or its own Far East. If the United States does not call the events in Egypt a coup and does not condemn them, it is perhaps because they are watching the Far East with one eye.