The bow of Vladivostok is afloat

July 22 2013
83
In the afternoon of 19 in July 2013 of the year at the French shipbuilding enterprise STX France in Saint-Nazaire, a technical launch and temporary removal from the dry building dock of the bow-built Vladivostok helicopter ship-dock, the Mistral-type ship under construction, was built for the Russian Navy.


The withdrawal was carried out with the help of four tugboats to turn the bow and then re-enter it into the construction dock already "stern ahead." This was done for the subsequent convenience of docking the bow with the aft hull, built in St. Petersburg at Baltiysky Zavod - Shipbuilding Ltd. and now towed to France. The arrival of the stern in Saint-Nazaire is expected, according to updated data from French sources, July 23-24, after which work will begin on its docking with the bow of the ship. The withdrawal of the fully docked Vladivostok hull from the construction dry dock of the Saint-Nazaire shipyard is tentatively scheduled for October 15 of the year 2013. 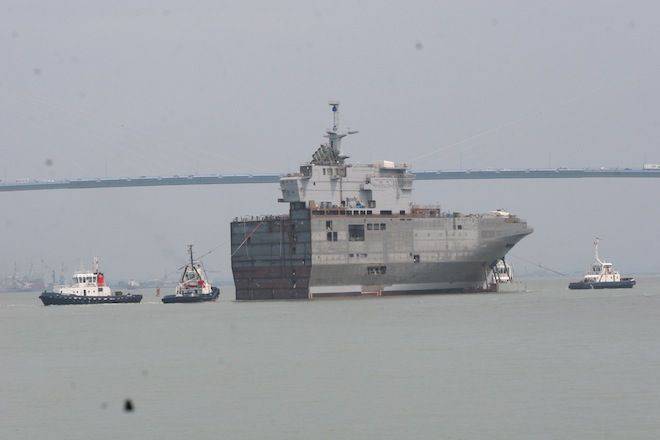 The nose of the landing helicopter ship dock "Vladivostok" being built for the Russian Navy after technical launching and temporary withdrawal from the building dry dock of the STX France shipyard. Saint-Nazaire, 19.07.2013

Ctrl Enter
Noticed oshЫbku Highlight text and press. Ctrl + Enter
We are
At the shipyard STX France, the process of docking of "Sevastopol" has begunVladivostok docked
Military Reviewin Yandex News
Military Reviewin Google News
83 comments
Information
Dear reader, to leave comments on the publication, you must to register.