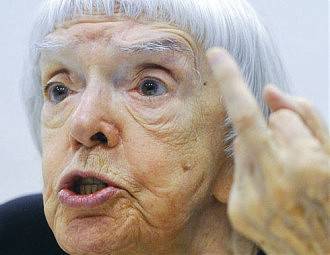 There is such a category of people who “do not sow, do not plow, do not build,” ineptly burning life through idleness and parasitizing not only on work, problems, feelings of others, creating people, but also trying to change their lives.


To this category belongs the main human rights defender of Russia, a US citizen Lyudmila Alekseeva.

Of course, it is difficult for me to keep the “cold mind”, remembering it. Lyudmila Alekseeva is just one of those parasites of society who, in 70, in their irrational desire for destruction and the desire to depict my homeland - the USSR - have “trampled the evil empire” through my childhood. “Using the example of the fate of my family, it becomes clear how the West and certain forces in the USSR played ping-pong with the fate of people most talented, passionate, caring, driving them to the path of dissidence. Instead of engaging in creative work, science, people began to write letters of protest, all sorts of “chronicles of the current time”, the West painted with broad strokes the image of the “evil empire”, the fifth KGB directors showed their need and depicted vigorous activity, gradually preparing the foundation for restructuring. ”

And one of those who had a hand in this was Lyudmila Alekseeva, which can be seen by anyone who is not too lazy to look at the archival-investigative file of her father in the SBU archive, the protocols of Alekseeva’s interrogations, how she brought him under sentence.

But, all right, these are all the affairs of days gone by, interesting only to the participants in the events or the historians of the human rights movement. Alekseeva’s regrets about the death of Aslan Maskhadov, a fighter against terrorism, or the protection of criminal authorities and turning them “in the blue eye” into “human rights activists” have already covered the dust of time.

Let's go back to today.

Russia's main defender of human rights demands that Snowden be extradited to the United States, where he can be executed.

Moreover, Alekseeva, being a US citizen, with great zeal more than once defended convicts for espionage in Russia in favor of the United States and other states. Such as Igor Sutyagin, sentenced to 15 years in prison for the transfer of information constituting a state secret to representatives of a British consulting firm, or Grigory Pasko, whom in December 2001 the Pacific Military Court fleet found guilty under the article "High treason in the form of espionage." The difference between Snowden and Russian (and other) spies and traitors is that, guided not by selfish motives, but by humanistic ideals, he uncovered the criminal actions of American intelligence services against citizens of the United States and other countries.

It is also piquant that as soon as Edward Snowden stated at his press conference that he was ready to fulfill the conditions of President Putin - not to harm the United States, thus removing obstacles to stay in Russia, Lyudmila Alekseeva, like a weather vane, changed her point, more In addition, she remembered that there was no extradition treaty between Russia and the United States, which is an obstacle to the transfer of Snowden to the American side.

True, she immediately inserted her “five kopecks” and declared that Snowden was not worthy of the Nobel Peace Prize. “I do not think that he is such a hero that he should be nominated for the Nobel Prize. But I do not think he is a traitor. He publicized the illegal actions of US officials violating the rights of citizens. Snowden is a controversial figure, ”she said.

Strange throwing at an age when it is time to focus on caring for your immortal soul and think about the eternal. She continues to fight for the interests of their curators. Say, "double standards"? No double standards! Always serve the US - the main and, apparently, the only standard. Bitches, sons and daughters serving the United States are always good for Alekseeva, for they are “patriots.” And the fact that the US commits crimes against the rights of people all over the world every day by listening to their conversations and reading their correspondence for Alexeyeva nonsense. Because in its “human rights” understanding, “Big Brother” is always right. And where, by what means and against whom the United States would not wage war, it is always a struggle "for peace and for freedom." By any means. At least to bomb.

However, other “human rights activists”, unfortunately, are not too different from her. Rather, they have the same birthmarks. For example, professional human rights activist Lev Ponomarev, who had become famous in his struggle “for your and our freedom” as an attempt to sell the Kurils of Japan, passionately opposed the “triumphant cheeky chekism” after the eviction of one of their grant-raising organizations for non-payment. But as soon as Moscow Mayor Sobyanin promised a new office, he immediately began to crumble before him.

These are our human rights defenders. In their greed and parasitism try to sit on two chairs. But publicity was double-edged. weapons, having opened their parasitic, fluugskaya, rotten essence, and all sensible people are now clear about them.

In other words, human rights defenders have to meet the requirements of customers, to work out the means. Often it is necessary to dodge strongly and to make incomprehensible to the public somersault, so as not to lose earnings.

And the market is pretty serious.

According to the official data of Rosfinmonitoring, for the period from November 2012 of the year to April of the current year, 2226 of Russian NPOs received from abroad 30,8 billion rubles.

That is, for the year 60 billion rubles. - In other words, 1,5 billion dollars. This is only direct financing. This means that at least 3-5 is just more times.

Ctrl Enter
Noticed oshЫbku Highlight text and press. Ctrl + Enter
We are
About Stalin and KhrushchevWhat you didn't want to know about England
Military Reviewin Yandex News
Military Reviewin Google News
247 comments
Information
Dear reader, to leave comments on the publication, you must sign in.