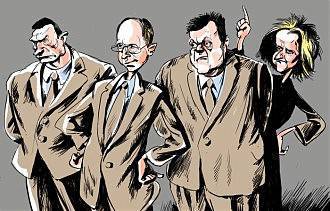 At one time, historians, in their search for the reasons for the moral and spiritual degradation of Ukrainian politicians, will most likely face a very unique and curious phenomenon in the development of society. To their surprise, it turns out that not only the beautiful half of humanity can be surrogate mothers, but also countries as subjects of the world community. In this case, Ukraine. Moreover, what is remarkable, the evolutionary period of development of this rarest phenomenon was so brief that many treatises of scholars would be devoted to covering and substantiating it.


December 1991 of the year. The Last Supper of Traitors in Belovezhskaya Pushcha. While the “best” German and “best” Yankee - Judah Gorbachev - was in ecstasy from the praises of NATO hawks, trying on a Nobel wreath and counting 30 pieces of silver, the three ambitious scoundrels rendered a verdict that put an end to the existence of a great power. A Ukrainian conspirator L. Kravchuk, who was looking at a drunken B. Yeltsin who was lying under a table after a feast, was struck by a brilliant idea. The moment has finally come when one can implement the plans of integral nationalists that he and his Bandera confessors are carrying out. While the heads of the republics of the USSR are at a loss from the treachery of this troika, they will scratch their heads, he will do everything with the rukhovets and radical nationalists to bury the results of the all-Union referendum, in which 75% of the polled citizens supported the preservation of the USSR.

As an experienced conspirator and inborn provocateur with a fist-fighter-world-eater, Kravchuk, in order not to lighten up prematurely, chose to use tactics in the dark of his surroundings (including repainted party workers), with whose hands in Galicia opened a bottle with a Bandera jinn, yearned for bleeding . Being in the shadow of the role of the serpent-tempter is the favorite tactic of this scoundrel, who has breathed in hope of revenge on the OUN-UPA bandits crawling out of the caches. Not for nothing today, he is "a friend - do not spill water" with the same scum on the views and actions of Schuster, who diligently imposes his fascist positions on Ukrainian society. Both in parliament and today Kravchuk is the invisible conductor of the neo-fascist orgies that have swept all of Ukraine today.

The current Western politicians themselves are wondering what unforeseen offspring can give another okrol surrogate nenki, which, look, and will rush in the flow of their "democratic" abode. But many of them are well aware that half-breeds, and even Bandera starter, are brutally unpredictable, exorbitant ambitions and readiness to serve any devil for dollars. And mixed marriages in their countries with surrogate children nenki can significantly affect the quality of the "gene pool" of Europe ...

But the West and its intelligence services are well aware that the beginning of the surrogatization of Ukraine was laid by Kravchuk, who needed rejuvenation of mossy Bandera cadres. Therefore, at first, the CIA made sure that a stream of OUN emissaries, "embryologists", poured in with the baggage of "embryos" for grafting nenke entangled in vectors. Apparently not without purpose was visiting in Ukraine and the grandson of Bandera, who did not disregard the nenku in need of young Bandera flesh. American “reproductive technologists” carefully took care of the variety of material for conceiving surrogate nenka: from former Gestapo agents, SS “Halychyna” punishers, venerable ideologists of Ukrainian national-fascism to current special services agents. Such efficiency of overseas zealots of "freedom and democracy" allowed in a short time to turn Western Ukraine into an enclave of fascism and introduce its agents into all the most important spheres of the state mechanism.

Available as a panel maid, the nenka is constantly in a state of pregnancy and uninterruptedly, as if from a conveyor, gives out the production of “embryos” of not only American sowing, but also similar “material” from other countries interested in erasing as soon as possible. Ukraine, all Russian roots. All their efforts are aimed at ensuring that surrogates born from ideological infusions ripen in record time. Unfortunately, they succeed. And this can be seen by the way the fledgling young scumbags with fanaticism urge to kill “moskaley”, “hang komunyak on Gilyaks”, with brutal frenzy mock at the mass graves and monuments to the soldiers of the Soviet Army who liberated Ukraine from Hitler’s invaders.

In this regard, I would like to refer to a link from the Internet about surrogate motherhood, which does not always give the desired results. Taking into account my allegorical form of presenting the article, it is safe to say that Ukrainian neo-fascists are interested in joining their ranks with adolescents with defects mentioned below:

“... According to scientists, they found out that children conceived with the help of donor eggs and sperm, like those who were conceived naturally, had no emotional difficulties, unlike those that surrogate mothers endured. According to the survey leader, Professor Susan Golombok, children born by surrogate mothers show signs of problems with adaptation, behavior (aggression or antisocial behavior), as well as such emotional problems as anxiety or depression. She also stressed that the most difficult period for them is adolescence. ”

It is precisely on this that the calculations of the neo-fascists are being built, in order to drag into their networks the raw, not morally and spiritually formed youth. Judging by the rate of fascism in Ukraine, we already see how the progeny produced by the surrogate nenka and brought up in the spirit of I. Fahrion already speak with the Nachtigalese accent. And the hour is not far when the nestlings and her and the Chickens begin to measure the skulls of citizens on the subject of the purity of the Ukrainian race with compasses. At this stage, the main task of the neo-fascists is that surrogate Ukraine should not slow down the pace of punching political villains. For this, the base of neo-fascists has accumulated plenty of embryos, ranging from the entire opposition to the famous provocateur and intriguer Shuster, who, no doubt, will play a significant role in the conception and birth of brown monsters who suck out all the healthy blood from impoverished Ukraine with milk . Quiet sleep of well-fed surrogate vigilants, oddly enough, is accompanied by lullaby marches by OUN-UPA bandits, which are sung by adviser (!) Guarantor A. German.

These are the consequences of Kravchuk surrogatization of Ukraine. To amuse myself with the thought that this werewolf would stop at that was at least naive. This Moor does not leave the political scene yet: his surrogate constitution, which will only legitimize the disruption of the seduced by him, will be on the order of the day.

Where are the guarantees that the same frostbitten innovators will not be born in the wild heads from her offspring, who will come up with the idea to clone the “titular nation”? It is not known whether the ex-ideologue will live to this day. But in his Russophobic dreams, he clearly dreams that these clones (with a clearly limited intelligence) do not hesitate, at the command of their leaders will rush to expand the expanses of nenki to Don. So, in any case, it is sung in the national anthem. Appetite comes with eating. You look, and the idea to dress up Chukotka aborigines in embroidered shirts and trousers will be born in this surrogate country.

It would be ridiculous if the carriers of these absurd and dangerous dreams were not financed by Western pseudo-democrats and Ukrainian oligarchs whose fathers and grandfathers knew what the Holocaust and chilling souls of the Bandera massacre are.

Ctrl Enter
Noticed oshЫbku Highlight text and press. Ctrl + Enter
We are
What you didn't want to know about England
Military Reviewin Yandex News
Military Reviewin Google News
46 comments
Information
Dear reader, to leave comments on the publication, you must sign in.