July 22 2013
58
In recent years, the Russian Ministry of Defense has repeatedly appealed to foreign manufacturers of weapons and military equipment with a request to provide one or another type of their products. Several times this led to the signing of large contracts (for example, the construction of Iveco LMV armored vehicles and ships of the Mistral project), and in other cases everything ended up on testing acquired samples (Italian armored vehicles Centauro and Freccia). A few days ago there were reports about the possible signing of the next contract for the supply of a limited batch of foreign military equipment. 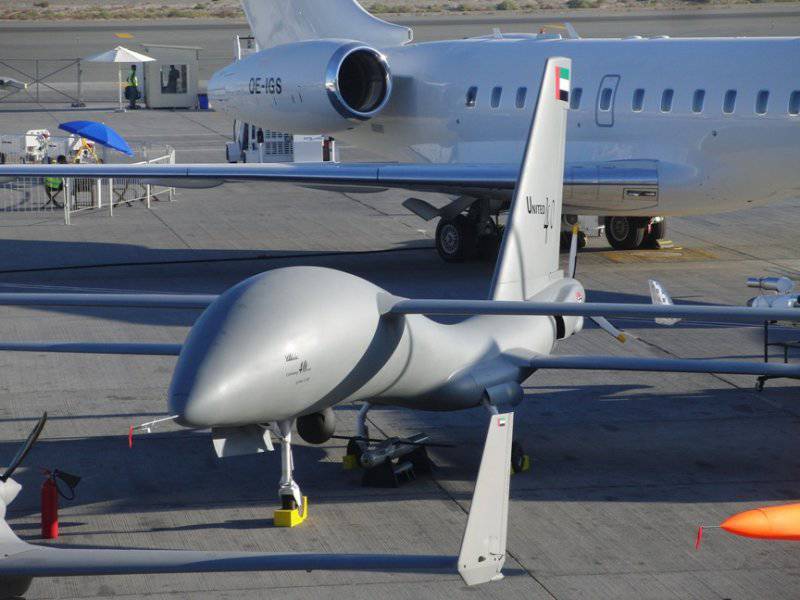 According to RIA News With reference to an unnamed source in the defense industry, the Russian military will soon acquire two United 40 unmanned aerial vehicles of the Block 5 version developed in the United Arab Emirates by ADCOM Systems. Details of the use of planned to purchase drones have not yet been announced, as well as other features of a possible contract. Moreover, in view of the anonymity of the news source, even the very fact of negotiations on the supply of Uniter 40 UAVs raises relevant questions.

The day after the news of the possible purchase appeared, another message appeared on this topic. This time, the words of their anonymous source quoted Interfax. According to this source, the Ministry of Defense does not plan to purchase any military equipment from a company from the UAE. Thus, the issue with the possible signing of a contract for the supply of United 40 drone can be considered closed: one source denied the information announced to others. Of course, the anonymity of the two sources leads to certain thoughts, but information about the absence of plans to buy UAVs from the United Arab Emirates in comparison with the initial news looks more plausible.

According to the official information of the developer, United 40 is a shock UAV, capable of locking in a given area for a long time. The creators attribute their development to the MALE class (Medium Altitude Long Endurance - “Medium Altitude and Long Flight Duration”), which allows it to perform various tasks, from reconnaissance of enemy targets to striking with guided weapons. An aircraft longer than 11 meters is equipped with a tandem wing spanning 20 m. Such an aerodynamic configuration, combined with an original S-shaped fuselage, allows a one-and-a-half-ton car (this is the maximum take-off weight) to rise to an altitude of 7 kilometers and fly at a maximum speed of 220 km / h. Due to the high aerodynamic quality, as stated in the promotional materials, the United 40 is able to be airborne for up to 120 hours. The UAV is equipped with a hybrid power plant with a main horsepower 115 engine and an additional 80-strong electric motor that rotates the pushing propeller in the rear fuselage. The architecture and principles of operation of the power plant were not disclosed. 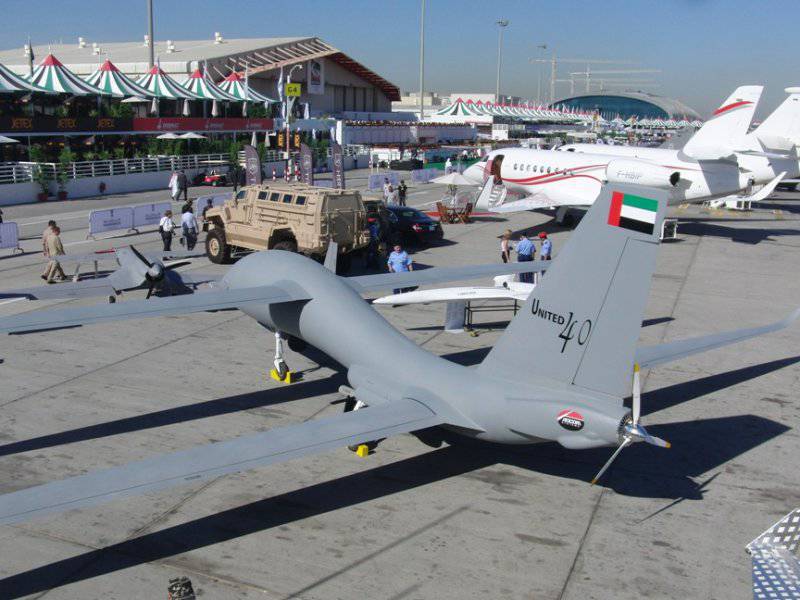 Special equipment of the new drone includes a complex of flight equipment, as well as two gyro-stabilized platforms. The latter can be used for the installation of the necessary equipment, television and thermal imaging cameras. Also on the wings of the unit United 40 provides space for the suspension of weapons. Each of the four holders has a kilogram 100 payload. As the main weapons proprietary guided missiles are offered.

Considering this drone, first of all, it should be noted that the UAE have never been leaders in the field of construction of such equipment. Moreover, the unit United 40 (previously called SmartEye 2) is a new development. For the first time this UAV in the current configuration was shown in February of this year at the IDEX-2013 international exhibition in Abu Dhabi. As far as we know, at that time the new drone was not even in the air yet. The first flight of the UAV United 40 took place only in March of this year. Interestingly, at the events of the past years, ADCOM Systems promised that the aircraft, which at that time was called SmartEye 2, would take off again in the first months of the year. In practice, these terms have shifted by about a year. Despite the fact that the project is at the stage of development and preparation for mass production, ADCOM Systems is already promoting a new development on the international market.

The authors of the news site Periscope.2 also note the general state of affairs of the developer United 40. Private company ADCOM Systems was created to compete with the state organization Mubadala, which receives funding from the budget. However, in recent years, ADCOM Systems has not signed a single contract for the supply of its equipment, which looks at least strange. In addition, there remain questions about the private financing of the company, since merchants who have invested their money in a particular project are unlikely to be satisfied with the presence of only a few exhibition samples.

You should also be distracted from the economic characteristics of the defense industry of the defense industry and find possible prerequisites for the latest news. The first mentions of the United 40 UAV in the Russian media, as Periscope.2 recalls, appeared only in February of this year, in connection with the exhibition of weapons and military equipment IDEX-2013. The Russian delegation included several representatives of the Defense Ministry’s leadership, including Colonel-General V. Chirkin, Commander-in-Chief of the Ground Forces, at this salon. He inspected the Uniter 40 drone for a long time and talked with representatives of ADCOM Systems. The commander praised the designers from the UAE for their desire to develop their technology and compared their development with the achievements of the Russian defense industry. According to him, regardless of the origin of the device - it is made independently or assembled from imported parts - it is already there. We do not have such a shock technique yet. In our army, UAVs are still used for reconnaissance, communications, electronic warfare, etc. tasks.

Also, Colonel-General V. Chirkin noted the current lag of the Russian unmanned sector from the leading foreign manufacturers of such equipment. However, as he said, during 2013, troops will receive new unmanned aerial vehicles of the Pomegranate and Orlan models, designed in accordance with the requirements of the military. In general, the February statements by the commander-in-chief of the ground forces looked unequivocal. He praised the employees of ADCOM Systems for their zeal and diligence in creating their own military equipment, but at the same time he expressed no desire to equip the Russian army with the machines they had developed. In this case, Chirkin's words could to some extent become a prerequisite for the appearance of the latest news about a possible contract, but for this it was necessary to interpret them too freely.

Thus, the current state of the United 40 project, namely the absence of any supply contracts and the not quite understandable situation with the nature of the works currently underway, cast doubt on the veracity of information about the forthcoming Russian procurement of even a few such devices. In case of signing such a contract, the Russian side will actually have to undertake the payment for research and design work. In addition, the mere fact of the delivery of UAVs from the United Arab Emirates will be a good advertising project, for which Russia, however, will receive nothing. Finally, the absence of the UAE in the lists of industry leaders suggests that by purchasing a United 40, the Russian military and industrialists are unlikely to be able to get any tactical or technical benefits.

The final argument against the version of the possible procurement of United 40 is the fact that currently in our country several design organizations are developing their own technology projects of a similar purpose. Thus, in the coming years there will be several domestic UAVs capable of performing the same functions as the device created in the Emirates. It is too early to compare the characteristics of domestic and foreign developments, but the available data suggest that Russian drones will be at least as good as the United 40 Block 5 offered for purchase.