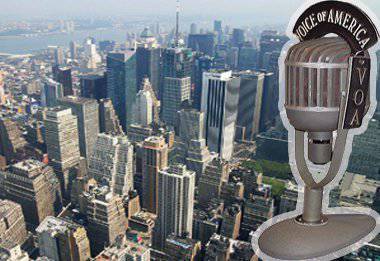 The propaganda tools of the US State Department are being deployed in the direction of their own citizens.[left] [/ left]


The American "ideological front" is bursting at the seams. The peaceful civilian occupation of Wall Street, brutally suppressed by the New York police, showed the price of overseas democracy. Full of vagueness история Boston terrorists, the Tsarnaev brothers, highlighted the methods of justice in the United States. The "Case of Snowden", which revealed the total surveillance of the US intelligence agencies for their own citizens and the entire world through the Internet, turned out to be the most powerful of the series of reputational attacks on the "stronghold of freedom." Fewer people believe in fairy tales about the "American dream", in the "sacred amendments to the constitution" and "guarantees of the person." More and more begins to doubt it - and understand who is to blame for their age-old boundless faith in the "torch of the civilized world."

And then came the time a new blow to the image of America - and it was organized not just anywhere, but in Washington. This month in the United States came into force a law that repeals the ban on state propaganda inside the country. The ban has been in effect since 1948, that is, from the very beginning of the Cold War. In 1972, through congressional amendments, restrictions on the internal broadcasting of state-owned media, such as Voice of America, were further tightened.
The ban was given to the public very beautifully: it’s impossible, they say, to brainwash our own citizens, and even for their taxes. We, they say, are not some kind of totalitarian state, in which the state ideology pours into the ears of our subjects from morning till evening, we are a free nation! Private media is enough to inform the people - let them compete with each other in pursuit of an audience. And the state propaganda is only for foreign ears: let the whole world hear Radio Liberty!

And now - such a disappointment. At the command of the congress, the broadcasting loudspeakers unfold in 180 degrees and begin to propagate good American citizens. Most surprisingly, US lawmakers justified the move with the same concern for taxpayers. Say, those who pay taxes, must in fact know what their money is spent on. So now let them listen to the “speeches of the State Department”. It didn’t do without hypocrisy: the authors of the law convinced the congressmen that their fellow citizens simply languish without state news programs - they try to find them on the air, but they cannot. Well, how can I not help!

However, the lawmakers had another argument, which really looks like the truth. They directly stated that in the United States today there are entire sections of the population that are under the influence of foreign propaganda, such as the Russian TV channel Russia Today, but do not have the opportunity to listen to their native state. Well, the argument is strong. In this regard, I would like, first of all, to mention our broadcasting channel: with its truth and professionalism, he brought Washington to the point that he is no longer able to trust the private media, and is forced, only to beat off our television reporters, to target his propaganda tools to his own population. In addition, I would like to wave a pen to all our home-grown “agents of the State Department”, who persuaded us with foaming at the mouth: state-owned media are, they say, “a remnant of communism”. Now they will have to get new manuals from the States.

Introducing domestic propaganda, the United States, in fact, signed that they are losing the information war - and at home. What will American “agitpropists” be broadcasting about? Obviously, they will begin to tell what a wretch this Edward Snowden is. What kind of scoundrels were the participants in the Wall Street "occupied". How useful is the 2001 Patriot Act of the Year. And how highly moral is the reading of private correspondence by members of the special services.

Well, Washington can be understood. After all, America is in the ring of enemies, Bashar Asad himself, and Kim Jong-un himself, are “threatening” her. Where is there without internal propaganda! That's just how, against this background, will the instructions to the “immature Russian democracy” look, which time after time the US State Department allows itself to be voiced? Undoubtedly obtained.

Meanwhile, the same State Department has published a report on how America observes international security agreements. Russia routinely reproaches the report. Do Russian obligations to ban biological weaponsDo American experts wonder? And they sigh: something is doubtful - not even bothering with arguments. Given that the United States itself by all means is blocking the creation of a mechanism that would allow them to check their own activities in the field of creating a "bacterial bomb."

The Russian Foreign Ministry has already expressed concern about this - our response suspicions are connected, nothing less, with the "biological activities of the US Department of Defense near the Russian borders." Tomorrow, perhaps, Russia Today’s plot will do this. The whole world, including American citizens, learns that the States are suspiciously secretive in this serious matter. Will “Voice of America” have time to “hang out” habitually - so that an Arizona farmer and a student from Chicago can hear it? Hardly. So what is needed, oh, how America needs an internal "organizer and propagandist." And there and close to Big Brother.