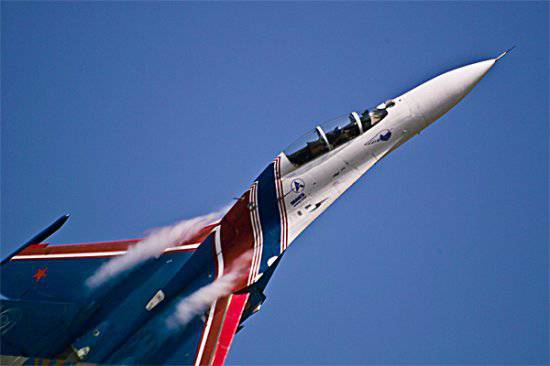 In January, 1971, signing the order to start work on the next aviation project, Pavel Osipovich Sukhoi, one of the best Soviet aircraft designers, hardly guessed about the scale of fame and recognition that his new design bureau would receive. And if he guessed, he didn’t betray this guess.

The new project, which was being developed as part of the PFI program (a promising front-line fighter), received a “firm” T-10 index. Him история It began two years earlier, when in the USSR they thought about the response to the American FX program (Fighter eXperimental), within the framework of which one of the best American F-15 Eagle fighters was created. 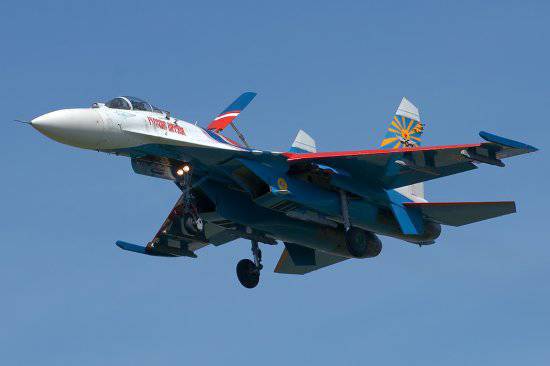 
The Soviet General Staff determined the requirements for a promising front-line fighter: it must have a long range, take-off and landing characteristics allowing the use of short / damaged runways, maneuverability, providing superior melee air combat, traditional dog dumps, and long-range rocket combat equipment beyond visual visibility.

Maneuverability is worth a little more detail. Once in 1950-s, guided missiles firmly entered the arsenal of fighters, in the USSR and the USA it was decided that the era of maneuverable air battles was over - now all fights will take place over long distances, using rocket weapons. The Vietnam War showed the fallacy of this point of view: the MiG-17 subsonic, devoid of guided weapons, but equipped with powerful cannon, successfully fought aerial battles with supersonic fighters, significantly exceeding their maneuverability. Moreover, the speed of supersonic machines did not always guarantee them the opportunity to leave. The more advanced MiG-21 demonstrated their excellent abilities - these machines were much lighter than the main American aircraft and combined supersonic speed with high maneuverability.

As a result, the United States began to develop the aircraft, which on the one hand would not be inferior to their then-main F-4 Phantom II fighter in combat load and flight range, and on the other, was able to withstand a maneuverable air battle with the MiG-17 and MiG-21.

The fact that guns and melee fighting were early to be written off was soon proved by conflicts in the Middle East, where MiGs and Mirage converged in maneuver battles.

Indo-Pakistani battles added fuel to the fire, where both sides had both relatively obsolete machines of the first generation (British “Hunters” as part of the Indian Air Force against the American “Sabers” from Pakistan) and modern supersonic machines.

The designers came to almost the same conclusions: in the USSR and the USA, increased attention was paid to the maneuverability of new machines. At the same time, the modernization of third-generation aircraft was underway, which was to increase their ability for close air combat. Both sides adopted the same concept of manning fighter aviation: Both the USA and the USSR simultaneously created light and heavy fighters of a new generation. At the same time, "heavy" cars should not be inferior to light in maneuverability. 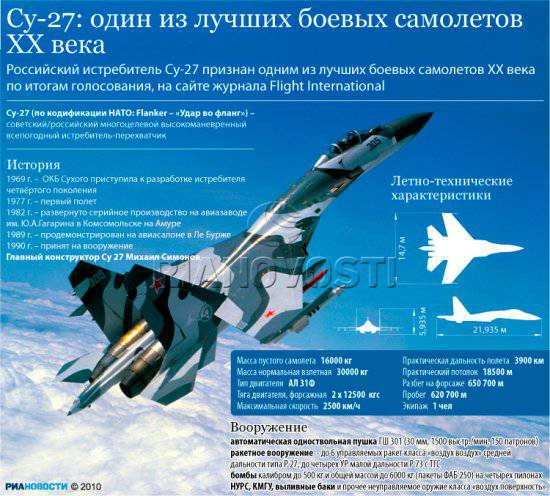 © Infographics. Artem Semenov
The Russian fighter Su-27 is recognized as one of the best combat aircraft of the 20th century by a vote on the website of Flight International magazine

High requirements immediately made the development of the future Su-27 a non-trivial task - not only the design bureau worked on the layout of the future fighter. Specialists from leading aviation research institutes - first of all, Moscow TsAGI and Novosibirsk SibNIA - made a huge contribution to its creation.

By the way, it is SibNIA that is to thank for the fact that Su-27 took place in the form in which we know it. At the beginning of the 1970s, at the “paper” stage of development, the specialists of this research institute claimed that the adopted T-10 layout would not allow the tactical and technical requirements of the Defense Ministry to be exceeded by the F-15 characteristics. This disappointing diagnosis was confirmed in the 1977 year, when the flight tests of the new machine began.

It is necessary to pay tribute to the courage of the KB leadership, which by then was headed by Evgeny Alekseevich Ivanov, who was not afraid to admit the shortcomings of the created machine and insist on its refinement. The position of the KB was adopted both in the Ministry of Defense and in the Council of Ministers of the USSR, and in the Central Committee of the CPSU. Work on the T-10 continued. 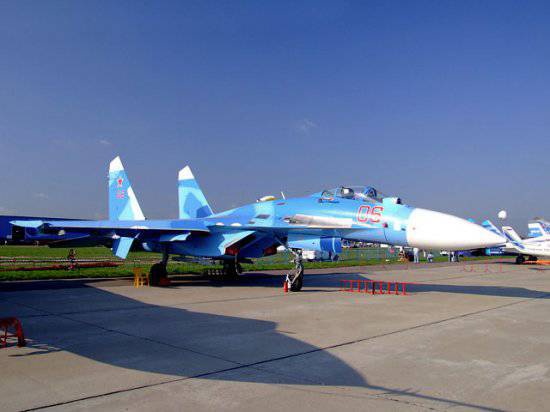 The main advantage of the Su-27 is a combination of high maneuverability with equally high ability to fight at long distances. This makes the Sukhoi Design Bureau a formidable opponent at all distances.
Another advantage that determined the long-term commercial success of the machine was its modernization potential: the 70-s platform of the last century received a second wind with the installation of modern equipment and weapons and can still compete with the best aircraft in the world.


Having entered the market at the beginning of the 1990, the fighter gained popularity, it is used by the 17 Air Force of countries, it is deservedly considered one of the best aircraft of its generation. A variety of modifications allows you to find an acceptable option for a variety of customers - from relatively poor countries in Africa, in need of modern and not very expensive aircraft, to India, ready to give a hundred million dollars for cutting-edge machines, saturated with a variety of high-tech equipment and weapons. Su-27 and its modifications became the best-selling 2000-s aircraft. Apparently, they will maintain this position in the coming years, especially given the constant inhibition of the development of the new "all-Western" F-35 fighter.

The technological barrier that stood before the developers of aircraft in the last 20 years, and economic difficulties slowed the adoption of new-generation machines. And in these conditions it is not surprising that the T-10 platform, like its overseas opponents, continues to evolve - plans to modernize this machine in a number of countries are designed for the period up to 2040 and, apparently, this is not the last milestone - mass production aircraft family T-10 continues.