In the future, the ISS may become a repair and refueling base for spacecraft.

July 22 2013
30
Despite the recent crash of the Proton-M launch vehicle, active work continues in the framework of the Russian space program. For example, as it became known recently, already this year, astronauts currently working on the International Space Station (ISS) will receive the spacesuits of the Orlan family. In addition to such updates related to the improvement of current projects, the Russian space industry is also making plans for the future. Already, scientists and engineers are opening new projects that will be implemented in the future. 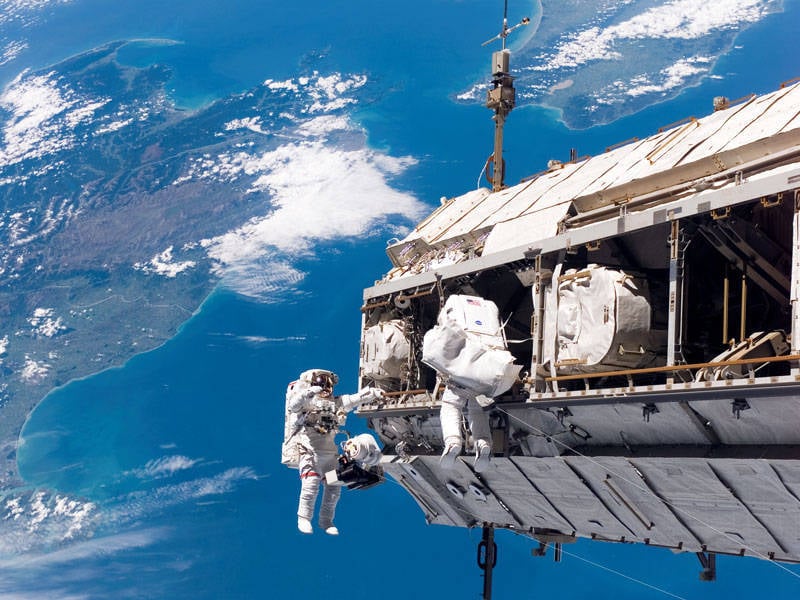 On Tuesday, July 16, the head of the Russian part of the ISS project V. Soloviev spoke about the future plans of the space industry. In the foreseeable future, it is planned to create a new module for the ISS, which will ensure the implementation of a number of auxiliary tasks. Like the existing components of the International Space Station, the new unit will become the basis for various research projects, but at the same time several new and still unusual tasks will be assigned to it. It is assumed that the new part of the ISS will also become a point of service and test service for various spacecraft.

This means that if necessary, the crew of the updated ISS will have to check the operation of various spacecraft and, possibly, repair them. Also in the existing plans there is a point about the possibilities of using the station as a refueling base for vehicles heading to other planets. In the future, it will be necessary to create similar objects on the Moon or on Mars, but for the time being we are talking only about an auxiliary base station in Earth orbit.

An interesting fact is that at the present time work is already underway to create such a unit for the ISS. RSC Energia has already started the corresponding project and is currently working on the main issues. The exact dates for the completion of the project and the launch of the first module of the new specialization, for objective reasons, have not yet been announced. The project is at the initial stages and therefore it is still too early to talk about the exact date of its implementation. In the same way, it is probably early to talk about the specific appearance of the future part of the ISS. Nevertheless, even with such a volume of information, it is possible to draw certain conclusions.

From the words of V. Solovyov it follows that the new module will to some extent resemble the existing ones on the ISS, but at the same time will receive a number of special equipment missing from the existing ones. First of all, these are certain technical means intended for refueling spacecraft and vehicles. Probably, the updated International Station will receive fuel storage tanks, as well as some equipment for transferring it to the refueling ship. Thanks to such equipment in the future, the implementation of some space programs can be simplified. For example, it will be possible to divide the preparation for the flight of a manned spacecraft to the Moon or Mars in several stages. So, the carrier rocket, on board of which will be the spacecraft itself with astronauts, will not have to put into space also the supply of fuel necessary for a long flight. Fuel and oxidizer can be delivered in advance to the auxiliary orbital station and with its help to refuel the ship itself before being sent to the target.

In this context, we can recall the famous science fiction movie "Armageddon". Recall, heading to the asteroid, the crew of the planet’s drillers and rescuers made an intermediate stop at the space station, refueled and continued on their way. Despite the numerous conventions and assumptions of this film, the storyline with refueling in orbit looks quite real. Moreover, now, as is clear from the statements of the leadership of the Russian space industry, scientists and designers have begun to test this idea and develop the appearance of systems that could provide a procedure for refueling spacecraft in orbit.

At the same time, the technical complexity of such a project is obvious. To justify it, it can be said that, under certain conditions, refueling vehicles in orbit can simplify and cheapen some aspects of space flight. First of all, the prerequisite for price reduction will be the absence of the need to send a single “flight” and a heavy machine like the American ships of the Apollo line, and the corresponding fuel supply for it. Under certain circumstances, it will be possible to divide the payload of one large and heavy launch vehicle into several parts (fuel supply and, depending on the tasks, several modules of the spacecraft itself), which will be delivered into orbit not simultaneously, but in turn, with several missiles with lower starting weight and lower cost. Finally, in this way it will be possible to prepare for long-haul flights complex spacecraft, whose overall dimensions and weight exceed the capabilities of all existing launch vehicles.

It should be noted that the above are only thoughts on the possible appearance and method of applying the new module for the International Space Station. Official information about this project is reduced to several phrases of the most general nature. Therefore, due to the fact that the project is at the earliest stages, as a result, the renewed base station may either not meet the expectations or exceed them. Apparently, in the near future, work will continue on shaping the appearance of a promising orbital module and new information about this project may appear only in a few months or even years. Nevertheless, even if there is a shortage of information, the project looks very interesting and promising.