Murder in Lebanon. Bloody drama on the script of the West 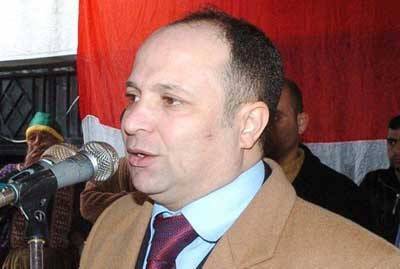 17 July in the south of Lebanon in the village of As-Sarafand was brutally murdered by the famous Syrian journalist, political scientist and public figure Muhammad Dirar Jammo. The terrorists broke into his apartment and shot from machine guns. It was fired with 30 bullets. Syrian and Lebanese television channels showed terrible footage from the crime scene - the apartment was covered in blood ...


In addition to journalistic activities, Jammo headed the political department of the International Organization of Arab Emigrants. Two days before his death, a political analyst spoke on Lebanese television, where he spoke about what is happening in Syria, exposing the criminal activities of the militants of the "opposition" and those who support them from abroad. This performance, as well as many of his other interviews and publications, caused such wild hatred from the bandits and their accomplices.

Lebanese investigators and legal experts immediately arrived at the crime scene. Acting Minister of the Interior of Lebanon Marwan Sharbel described the bloody crime as a political assassination.

As the Syrian leadership of the Arab Socialist Renaissance Party stated, this villainy shows the true face of the “opposition” not accepting other points of view, it demonstrates hatred of people and the primitive views of terrorists and those who support them. It is also a crime against freedom of speech, which is respected by all civilized nations.

A statement by the Syrian Ministry of Information on this matter says: “The murder of our colleague again confirms the barbarity of forces unable to engage in dialogue and unable to speak the language of politics. They have no idea of ​​cultural values ​​or political methods. Criminals do not value human life ".

Former Lebanese President Emil Lahoud pointed out that this brutal murder shows that the militants are in a desperate situation after the successes of the Syrian army on the battlefield.

“It was a desire to stifle the voice of a man who defended his homeland to the end and resisted on the information field a large-scale terrorist attack, carrying murder and destruction,” the Lebanese politician emphasized.

Many Syrian and Lebanese public figures, human rights activists, journalists have condemned this monstrous massacre. Thus, the ex-deputy of the parliament of Lebanon, Hassan Jaakub, noted that the Syrian journalist was killed on Lebanese soil. This indicates that certain forces are trying to draw Lebanon into the Syrian crisis. Jaakub clarified who he was talking about: the so-called “March 14 Coalition,” headed by the notorious Saad Al-Hariri, who supports and finances Syrian terrorists.

The massacre of a man who was a true patriot of Syria and spoke the truth, met with condemnation in the world. Thus, Professor of the University of Slovakia Juraj Lazarchik regarded this crime as an encroachment on freedom of speech and all human values. The National Union of Syrian Students and representatives of the Syrian community in the Czech Republic issued a statement calling the killing of Muhammad Jammo irrefutable proof of the bankruptcy of the terrorists and the forces that support them.

Speaking at the UN meeting, the Permanent Representative of Syria with this international organization, Bashar Al-Jafari, stressed that the national media have long been a target for militants and those who support them. "We lost journalist Muhammad Dirar Jammo, who was killed by those who receive weapon and money from other countries, ”he said.

The diplomat also said that many journalists penetrate into Syria illegally. Some of them were arrested, but they were released and all of them were given the opportunity to return to their countries. Syria sent a letter to the UN with lists of the names of journalists who illegally entered its land.

Al-Jafari recalled other cases of reprisals against journalists. So, 27 June 2012 of the year, he noted, the terrorists attacked the headquarters of the Syrian television channel Al-Ihbariy, looted the studio, killed three journalists and guards. 6 August the same year, an explosion occurred in the building of the TV and Radio Broadcasting Directorate in Damascus. , already caught. He admitted that he acted on the instructions of Saudi Arabia.
The Syrian diplomat also noted that, despite all this, honest journalists continue to objectively cover events and expose the activities of the bandits.

And, as if to continue the words of Al-Jafari, the terrorists committed a new crime against Syrian journalists. On July 18, in the Karams Ash-Shami quarter of the city of Homs, they bombarded a radio and television building with a mortar. As a result, two of his staff were injured. Much material damage was caused to the equipment.

On the same day, a series of terrorist acts took place in Homs. There are dead and wounded. One of the shells fired by militants exploded in the vegetable market. One person injured.

The bandits also bombarded the Maysaloun school in Homs, which has now been turned into a refugee temporary residence center. Three people died, around 10 suffered.

On the eve of the “oppositionists” a residential building was fired from a mortar in the Mezze district of Damascus. Killed 11-year-old boy. Another 8 year old child and an old man were injured.

The bloody drama written by scriptwriters from the West and the USA continues. People continue to die. The West continues to talk about "democracy" and "freedom", not paying attention to reprisals against journalists, nor to the death and suffering of children.

Ctrl Enter
Noticed oshЫbku Highlight text and press. Ctrl + Enter
We are
Situational analysis of the death of the MH17 flight (Malaysian Boeing 777), made on the basis of engineering analysis from 15.08.2014Syria: Americans scare themselves, and Asma Asad buys chairs
Military Reviewin Yandex News
Military Reviewin Google News
65 comments
Information
Dear reader, to leave comments on the publication, you must to register.