Why Ukraine needs to join the Customs Union 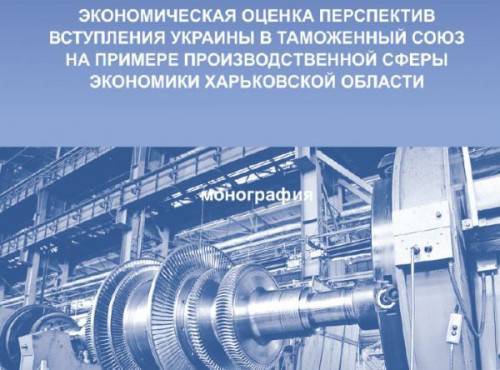 This was told by the authors of the analytical report “Economic assessment of the prospects for Ukraine’s entry into the Customs Union on the example of the industrial sector of the Kharkiv region economy” at a press conference held in Kharkiv news agency Status quo on July 16.


In fact, it was a presentation of a research publication of the same name, which was offered free of charge to analysts, political scientists, and journalists present. Those who wished were carried away by several copies to share with colleagues.

The analytical work was prepared by the joint efforts of scientists of the North-Eastern Scientific Center of the National Academy of Sciences and the Ministry of Education and Science of Ukraine and the National Research University "Belgorod State University". Published under the scientific editorship of Doctor of Economic Sciences, Professor P. T. Bubenko, in Belgorod - the center of interregional cross-border cooperation.

P. Bubenko, V. Zakharov and A. Aleksandrovsky (left to right) at the presentation

The publication was represented by Pavel Bubenko, Director of the North-Eastern Scientific Center of the National Academy of Sciences and the Ministry of Education and Science of Ukraine, and Acting Director of the Institute of State and Municipal Administration of BelSU Victor Zakharov. The third "hero of the occasion" at the press conference was Alexander Alexandrovsky, president of the newly created Interregional Employment Assistance Fund.

In the presented collective work, sociological and economic aspects of integration projects, in particular the Customs Union, their influence on the development of border regions are considered.

The authors argue that the materials of the monograph can be used in the work of state and municipal servants, employees of diplomatic services, scientists, economists, managers at various levels and anyone interested in the integration of the post-Soviet space and the development of border regions. In the course of the conversation, which took place after the presentation, it was still unclear whether the conclusions of this expert group would fall into the hands of those who make government decisions in Ukraine and how the monograph will get to those interested in the actual problem of Ukraine’s joining the CU.

It is worth noting the context in which the monograph was presented. As you know, at the end of May, the Presidents of Belarus, Kazakhstan, Russia and Ukraine adopted a “Statement on Ukraine’s participation in the Eurasian integration process” in Astana, and a “Memorandum on deepening cooperation between Ukraine and the Eurasian Economic Commission” was signed in Minsk. The Customs Union made an intelligible step of friendship towards the ever-wavering leadership of Ukraine.

One cannot ignore one distinct voice that was voiced at the recent St. Petersburg International Economic Forum. Valeriy Muntiyan, the government authorized representative of Ukraine for cooperation with the Russian Federation, CIS member states, EurAsEC, a well-known economist who prepared detailed analytical notes to the government of Ukraine on the issue of joining the CU, metaphorically and emotionally stated: "... invitation of Ukraine to the Zone free trade with the European Union on such terms, without participation in the Customs Union and the CES, in my opinion, this is an invitation to “Titanic”. ”

At the Kharkiv press conference, the assessments were not so emotional, but all three main speakers agreed that the figures convincingly testify to the direct economic benefits of Ukraine joining the CU.

Opening the meeting, Viktor Zakharov noted that the Ukrainian-Russian border undoubtedly imposes an imprint both on relations in the border region and on relations of the states as a whole. The border is an obstacle to communication, interpenetration, mutual enrichment and growth. Therefore, one should either simplify the border crossing procedures, or abolish the border altogether - to eliminate obstacles.

The absolute majority of the inhabitants of the frontier region on both sides, according to statistics provided in the monograph, are in favor of speeding up the integration processes. The interstate rapprochement between Russia and Ukraine is positively attributed to 91% of the respondents from the Belgorod and Kharkov regions (the number of respondents from the regions in the opinion poll was equal). At the same time, 30,6% of respondents noted that integration will contribute to the development of the economy, 25,8% - that it corresponds to the general trend of world development, 21,4% - that this corresponds to our traditions. V. Zakharov stressed that the studies carried out confirm the need to intensify the economic cooperation between Ukraine and Russia, and the TS integration model allows this.

Citizens see business structures, authorities, parties and social movements as subjects of integration actions. Integration is undoubtedly the trend of the day, which allows to improve the living conditions of both an individual and the region as a whole.

One of the authors of the monograph from the Ukrainian side, Corresponding Member of the Academy of Economic Sciences of Ukraine, P. Bubenko, stressed that the research was convincing: in the framework of the Customs Union, the Kharkiv region, in the first place, will have more weighty advantages than when Ukraine joins the European Union. The task of the research carried out, according to the scientist, is to show, with an example of, say, the Kharkiv region (and already started research in the Lugansk and Donetsk regions), a clear benefit from Ukraine’s accession to the CU. But even at the macro level, the figures show that today Ukraine pays Russia about gas about 9 billion dollars annually for Russia, and this significantly affects the trade balance, which is so far negative. In the case of entering the CU, gas can be sold to Ukraine, for example, at domestic prices, and this will immediately lead to a jump in the efficiency of the Ukrainian economy.

This conclusion was made by the group of P. Bubenko, based on the forecast of the development of Kharkiv region according to the model of orientation to the average annual growth rate of the gross regional product and the projected rates of foreign trade turnover of the CU and EU countries.

In addition, according to the Kiev researcher, the actual accession to the EU is very vague, illusory looms only in an unknown perspective, and economic development in an independent mode, that is, without a reliable strategy of economic integration, has rather limited opportunities and significant risks.

P. Bubenko cited the calculations according to which Ukraine within the structure of the Customs Union will receive a GDP growth almost X times more than when joining the EU. In particular, in the Kharkiv region within the CU, the gross regional product by 2 will increase by 2017%! Exports to the CU countries of machine-building products, which are the main export component of the production complex of the Kharkiv region, may exceed 46 billion dollars by this period, with their share in total trade turnover increasing to 1,5%. 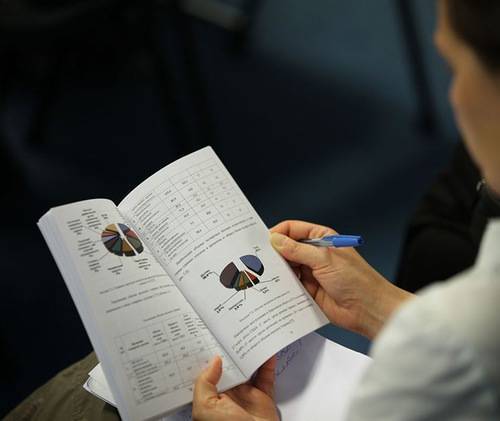 Leafing through a new monograph

“The Kharkiv region, not being among the leaders in terms of foreign economic activity, significantly benefits in terms of the quality component of the structure of exports and imports - precisely due to engineering products, due to the production and marketing of technical goods. As the leader of Ukrainian engineering and as a border region, the Kharkiv region has real prospects for deepening cooperation and trade with Russia and other countries of the CU on mutually beneficial economic and innovative conditions, ”the analyst believes.

A. Aleksandrovsky, the head of the newly established foundation, noted that his organization would be involved in popularizing the results of this analysis and explain to the population the obvious advantages of Ukraine’s integration into the CU.

It was noted that, in general, the level of argumentation for Ukraine’s accession to the CU is very high and invariably exceeds the level of argumentation of supporters of EU membership, including experts from various foundations created, for example, under certain presidents of Ukraine. But there is a further planned movement of the Ukrainian authorities towards the EU.

A. Aleksandrovsky, speaking of labor force and migration, recalled that in the countries of the Customs Union the citizens of Ukraine work mainly as highly qualified employees, they are in demand as engineers, builders, technologists, etc., whereas in the EU Ukrainians are seen mainly as attendants, often inferior.

“We have a choice,” A. Aleksandrovsky noted, “either we will become equal participants in a large, creative, supranational project and process, or we will be“ very carefully and efficiently ”sweeping the hallway in the European Union.” The co-rapporteur also stressed that his foundation intends to conduct active educational activities among citizens - about the obvious advantages of Ukraine joining the CU.

Answering the questions that followed, P. Bubenko said that this study was initiated by the Russian side, but Ukrainian scientists found it important and necessary to take part in it.

A consensus was immediately reached between the presenting monograph and the listening audience that econic arguments did not exhaust the palette of conviction and that without the willful fate of the authorities, state structures of Ukraine, and without politicians, integration processes are hardly possible.

Moreover, according to experts, people make choices, as a rule, emotionally, mentally, and not rationally. 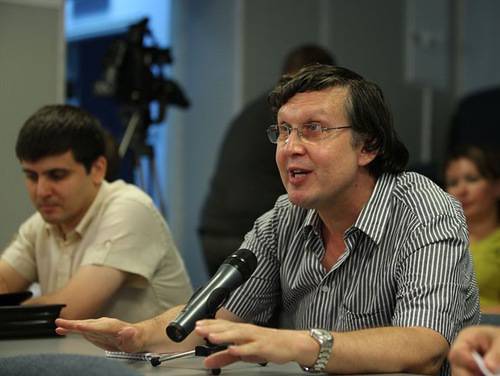 The first. In the conditions of the marginalization of Ukrainian society, that is, the fall of the educational level and the sharp impoverishment of the population, it is necessary to increase educational activities (hereinafter highlighted by me - Auth.). That is, today there is a need to improve the educational level of the population, otherwise - any intellectual appeals with arguments for joining the CU will be in vain and will become a kind of beads, thrown to nowhere.

The second. A. Kutnik proposed an interesting and relevant, in our opinion, formula - “coercion to friendship”. Bearing in mind that in the current situation, there is no longer enough internal resources (we assume mental, volitional, intellectual, political, power) to start a coherent process of integrating Ukraine into the CU, and, therefore, an external intelligible message is needed. It turns out that the current increasingly marginalized citizen of Ukraine should be “forced into friendship with Russia”. Today, two approaches to the situation in the new mentality are obvious, says the writer Kutnik: some citizens have an understanding that the unity within the Customs Union is about joint creation, others have a desire to get into the EU to “snatch” more.

An employee of the Kharkov Slavic University, A. Samoilov, drew the attention of the authors of the monograph, that one analyst, some economic assessments, did not “move the deadlock”. He received explanations from Mr. Bubenko: today, the Government of Ukraine has an order for academic specialized institutions to quickly prepare analytical notes on the problems of Ukraine’s integration into the EU and the CU. Which indicates, in the opinion of the scientist, the presence of the direct interest of the authorities in clarifying the situation.

Candidate of Sociological Sciences, Associate Professor V. Zakharov noted that the path to integration is “a two-way road”. The center at BelGu signed an agreement with Rossotrudnichestvo about similar studies, that is, this work will be carried out and monitored at the state level.

From myself, we add: it is strange that this is being done now, and where did the Ukrainian government look before? After all, the analytical work in this direction of the same governmental expert group V. Muntiyan is known, and its conclusions are also known.

What else will push the Ukrainian "pushing and pushing" towards Russia and the Customs Union?

Ctrl Enter
Noticed oshЫbku Highlight text and press. Ctrl + Enter
We are
Under the banner of eurorepairRussian miracle of the XXI century
Military Reviewin Yandex News
Military Reviewin Google News
250 comments
Information
Dear reader, to leave comments on the publication, you must to register.