Collision of a Russian border guard with a Ukrainian launch: entertaining details 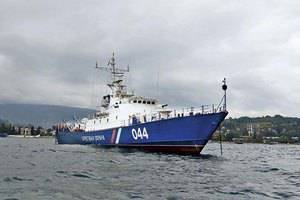 In the evening of July 17, in the Sea of ​​Azov, in the Russian settlement of Vorontsovka, there was a collision between a Ukrainian longboat and a boat from the Coast Guard of the Russian Border Guard Service. As a result of the incident, at least 2 people from the Ukrainian ship were killed, and the clarification of relations very quickly passed to the level of foreign affairs agencies.


Official and unofficial information about the state of emergency

Here is what the statement of the State Border Service of Ukraine says:

“According to information received from the duty center for monitoring fishing vessels, in the area of ​​the Dolzhanskaya Spit, during the pursuit and maneuvering, the border boat of the Russian Federation collided with a Ukrainian small-sized vessel. As a result of the incident, the fishing vessel turned upside down.

According to preliminary information, one of the crew members was saved. Today, around 5.30 in the morning, during the search and rescue activities, the bodies of 2 sunken fishermen were found, and the search for 2 people who were on the launch continues. The rescued man is a citizen of Ukraine 1964 of the year living in the village Bezymennoe, Novoazovsky district, Donetsk region. Russian border guards confirmed this fact. The search for fishermen other than the border boat is additionally conducted by 2 boats EMERCOM of Russia. ”

Also, the State Border Service of Ukraine informs that the Russian side was invited to hold a special meeting in the area of ​​the incident to clarify all the circumstances of the incident and in the future to conduct a joint investigation of the situation in which the Ukrainian launch with the fishermen sank.

But the version, which is mass disseminated by the Ukrainian media with reference to "sources in law enforcement agencies": "When the boat with the sailors was in the territorial waters of the Russian Federation, she was noticed by Russian border guards and staged prosecution of alleged poachers. Having overtaken the vessel, the Russian border guards drove onto the boat, as a result of which it rolled over. ”

Ukraine considers the actions of the Russian border guards "disproportionate"

In the morning of July 18, at the Ministry of Foreign Affairs of Ukraine, Andrei Vorobiev, RF Charge-attorney in Ukraine, was summoned - Russia's ambassador to Ukraine, Mikhail Zurabov, is currently on leave.

During the meeting with the Russian diplomat and. Ukrainian Foreign Minister Ruslan Demchenko expressed "deep concern of the Ukrainian side over the actions of the Russian border guards and the disproportion of the measures they used, which led to tragic consequences." A Ukrainian official handed a note to the representative of the Russian embassy.

The Ukrainian side demands a comprehensive and objective investigation of this incident with the participation of the Ukrainian and Russian authorities, as well as taking measures to prevent the recurrence of such cases in the future.

In response, the Russian side expressed its condolences in connection with the incident in which Ukrainian citizens were injured, and also assured that the necessary measures would be taken to ensure a proper investigation of the incident. The Russian side also assured that it would provide all-round assistance in treating the victims, searching for missing people, and repatriating the bodies of the dead Ukrainian citizens.

The Ukrainian side reports that the Consul General of Ukraine in Rostov-on-Don arrived at the scene to coordinate the actions of the competent authorities of Ukraine and Russia to investigate the incident, search for the missing Ukrainian citizens, assist the victims and ensure the repatriation of the bodies of those killed to their homeland.

The prosecutor's office of the city of Mariupol (Donetsk region, Ukraine) has already dealt with the death of sailors in the Sea of ​​Azov. The agency confirms that in the evening of July 17 a small-sized fishing vessel with 5 persons on board crossed the border of Ukraine, collided with a border boat in the coastal waters of the Russian Federation, as a result of which it sank.

The Mariupol Prosecutor's Office for the Supervision of Compliance with Laws in the Transport Sphere information on this fact is entered into the Unified Register of Pre-Trial Investigations with preliminary qualification under art. 291 (violation of transport regulations) of the Criminal Code of Ukraine.

The investigation was entrusted with conducting (!) The investigative department of the linear department at the Mariupol station of the Ministry of Internal Affairs of Ukraine on the Donetsk Railway. It is noted that the purpose of crossing the border and other circumstances of the incident will be established during the pre-trial investigation. It also emphasizes that the investigation is under the control of the prosecutor's office of the Donetsk region.

According to the latest data, another fisherman escaped from the barge rammed by the border guards. It is reported that now Russian doctors are engaged in the treatment of Ukrainian sailors. The condition of both affected doctors is assessed as severe.

It is established that three of the sailors are residents of the Ukrainian village Bezymennoye, two are from the neighboring village of Samsonovo. As the secretary of the Bezymensky village council, Yevgeny Shvedko, said, commenting on the incident: “Whether the fishermen went legally to fish or not, the law enforcement agencies will figure it out. One thing I can say is that people didn’t move from fat to Russia, but in order to somehow make ends meet, having sold their catch. Only 470 officially work in our village of 1,500 able-bodied people. Mostly go to Novoazovsk, Mariupol. Only 70 are involved in agriculture in the village, and in Soviet times there were a thousand. The rest earn fish.

The press officer of the Donetsk frontier detachment, Eduard Nikitenko, noted the following: “So far we have established that the fishermen had permission to go to sea. Sailors are required to coordinate their actions with us if they plan to go farther than 2 miles from the border. ”

At the time of the preparation of the material, there were no comments from the Russian departments or officials.