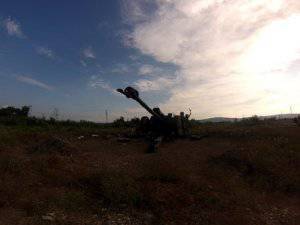 22-mm howitzers, dubbed for their reliability "Mercedes", capable of firing at a distance of 15 km. For this reason, they are not masked at a remote position. It is even possible to parachute a cannon with a parachute, after which 5 minutes is enough for the crew to prepare it for firing.


As part of the combat crew soldiers whose life will end in three months. It can be said that only old men went to the training battle. Battalion tactical maneuvers were for them the result of combat training. Recruits will take the place of the guns after a course of single training.
Ctrl Enter
Noticed a mistake Highlight text and press. Ctrl + Enter
We are
Innovation Day of the Southern Military District: the main battle tank T-90AInnovation Day of the Southern Military District: the Uran-6 robotic complex
8 comments
Information
Dear reader, to leave comments on the publication, you must to register.