Americans will send a "smart" airship to Afghanistan

January 20 2011
1
October 15, the US Army will send a supercomputer to Afghanistan, but it will be installed not on a well-guarded base or in an underground bunker, but on a huge dirigible that can fly at high altitude for a week and watch the vast territory.

This is the result of an ambitious, worth 211 million dollars, project Blue Devil. At present, this airship, which is a huge aircraft longer than 400 meters, has yet to be assembled. The idea of ​​the military is to equip the airship with a dozen different sensors, which will be constantly interconnected. The supercomputer will process the data coming from them and automatically direct the sensors in the current direction, for example, at the person reporting the impending ambush. Airborne airship equipment should minimize the need for analyst people. The goal is to get information and bring it to ground forces in less than 15 seconds. Against the background of today's cumbersome and long-term data exchange between different observational platforms and control centers, this sounds like a fantasy. However, if successful, Blue Devil will change the nature of observation from the air and will minimize the time between requesting information and receiving it. 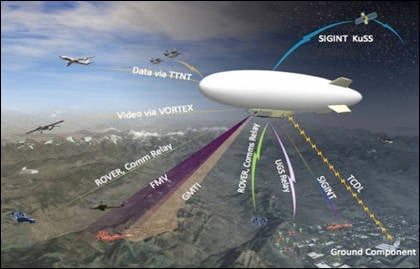 In local conflicts, one giant airship can replace hundreds of unmanned aerial vehicles.

The first stage of the Blue Devil project is in full swing: at the end of last year, four modified observation aircraft went to Afghanistan, equipped with an array of sensors being developed as part of the project to create the airship.

The second stage (assembly and equipment) will be much larger and more difficult. It is planned to build an airship on 100 m larger than a football field, the volume of 39,6 thousand m 3. The military expects such a huge aircraft to be able to get enough fuel and helium to stay in the air for a week at an altitude of almost 6 km (most airships fly at an altitude of 1 km or less).

However, the main advantage of Blue Devil is not the size, height or duration of the flight, but complex equipment and software. In addition to an array of sensors, such as listening devices, day / night video cameras, communications equipment and others, Blue Devil will be equipped with an onboard surveillance system for the vast surface area of ​​the WAAS. Such a system is currently used on Reaper unmanned aircraft and represents a dozen different cameras that monitor the surface within a radius of 12 km. Sensors and all onboard equipment of the airship will be installed on retractable pallets developed by Mav6 LLC, making it easy to change the configuration and maintain the aircraft.

WAAS can use 96 cameras and produce every hour up to 274 a terabyte of information that, according to the military, 2000 requires people to process the footage. By transmitting information by satellite to analysts on ground bases, it is impossible to solve the problem of processing such a large amount of data, so Blue Devil will install a supercomputer equivalent to a server with 2000 single-core processors that can process up to 300 terabytes of data per hour. At the same time, he will not only send observation data to ground units, but will process information, marking the time and place of observation. Thanks to this, the commander can quickly obtain intelligence data in a certain area.