Obama is going to us 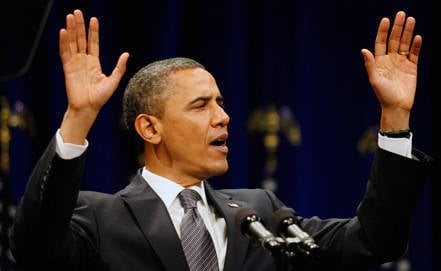 Obama will still arrive at the Big 20 summit, which will be held in Russia. Initially, the American conspiracyists heard the words that the Obama visit might be in doubt, because Putin does not want to agree on the extradition of Edward Snowden. The main conspiracy theorist and "avenger" was Senator Lindsay Graham, who generally called on "progressive humanity" to boycott the Olympics in Sochi, if Moscow does not go to issue Snowden. And if the question is still open with the trip of the American team to the Olympic Games in Sochi, the American president decided to come to Russia for the summit.
Evil tongues say that he is going to ask Putin to have mercy, and give Snowden in exchange for any preferences. The administration of the American president is ready to go on order a taxi in Moscow - suddenly Putin will not meet at the airport, he will send some third apparatchik from the Kremlin to show the situation in which the United States is today.
If Obama really wants Snowden to be in the US, then his Wishlist (one of Putin’s frequently used words) should be used. What are the advantages Russia can extract from the situation with a fugitive from the United States. The first bonuses are already visible. After all, now the whole world has the opportunity to see how the most democratic country in the world literally hunts for a man who told about the criminal nature of the work of its special services. The whole world understands that the prosecution of Snowden is for political reasons, which proves that the United States is not the same.
Americans would straighten out their position, raise their authority somewhat, but they finally collapse on their side, trying with all their might to get Snowden. With such activity, you can and finally collapse, typing the seawater at the most ...
But you can bring comrades from the United States to a white-hot, forcing to reconsider all their recent "friendly steps." As an example: unexpectedly cancel the sentence in respect of Viktor Bout, to be more coherent about missile defense. There are many options. And there is in fact also the Magnitsky list. Response claims can be set so much that will not find it. There is a time to think before the start of the summit. Obama has time too.
And if Snowden is handed over to Washington without any preferences for Russia, then this is not the option that suits Russia today.
Ctrl Enter
Noticed oshЫbku Highlight text and press. Ctrl + Enter
We are
Graham, happy birthday!
Military Reviewin Yandex News
Military Reviewin Google News
22 comments
Information
Dear reader, to leave comments on the publication, you must to register.