July 18 2013
9
In the first post-war decade, a large number of aircraft of the original design were developed. The XV-51 bomber, which is notable for the unusual design solutions, can be safely attributed to the brightest aircraft of that time. The developer of this bomber (production designation Model 234) was the American company Glenn L. Martin Company. This machine incorporates the 15-year experience of the B-10, Baltimore, Maryland, and B-26 Marauder bomber company. Although the latter was called by the people “the factory of widows”, due to the rigor of piloting and the unimproved start of a military career, it was one of the most accomplished in this class. Many of the technological and design solutions worked out at B-26 have become classical for aircraft building. 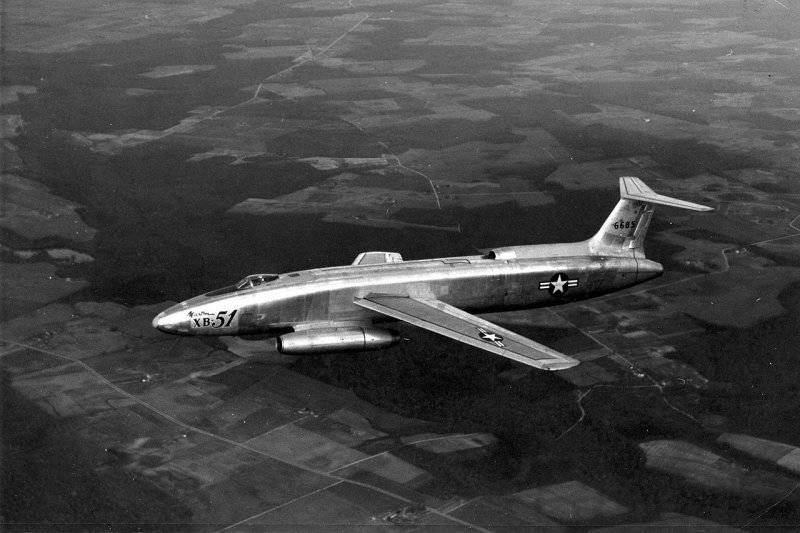 At the end of the war, the US Air Force had formulated the requirements for a tactical attack bomber, which was to combine high-speed flight, high-power rifle armament and a large bomb load. It was assumed that such a machine would have a powerful cannon battery in the nose of the fuselage, the maximum bomb load would be at least 12 thousand pounds (5450 kg), and the speed of protection would be from fighters. It became obvious that such an aircraft must be equipped with jet engines.

Initially, the Martin company developed the aircraft as an attack aircraft, it was even given the military designation XA-45, but after accepting the requirements of the Air Force to the front bomber the machine was significantly redesigned. The desire to meet the requirements forced the designers to use very original design solutions. The aircraft was designed to operate from medium and low altitudes. It should be noted that the XB-51 was designed to perform tasks that were later assigned to the Martin B-57В bomber, the English version of which was developed at the same time as the XB-51 bomber.

The results of the first calculations showed that the bomber's take-off weight was approaching 36 tons. It was decided to place the payload (24-e 500-pounder bombs) in a long bomb bay without carrying it to the external suspension nodes. The company had at its disposal only engines J-47-GE-9, the thrust of which was 2360 kgf. To get the desired characteristics of the thrust of the two engines is clearly not enough, and when using four, it became redundant. This circumstance played a major role in the choice of the three-motor configuration. If three engines were located in the rear fuselage, the bomb bay relative to the wing would move forward. This was the reason for the appearance of a significant run-up of the centers before and after the bombing. The shift of alignments could be compensated for by increasing the area of ​​horizontal tail, and this led to weight costs. Therefore, the two engines move forward, and one left in the rear fuselage. An excessively thin profile will not allow the front engines to be hung under the wings. Wing height in the areas of possible suspension is not guaranteed, when using materials of those years, sufficient structural strength. The thin wing also did not allow the main landing gear to be installed in it. As a result, the following scheme was chosen: two front engines - in the nose of the fuselage on short pylons, one engine - in the tail section, the main landing gear stands - behind and in front of the bomb bay, according to the "tandem" scheme. 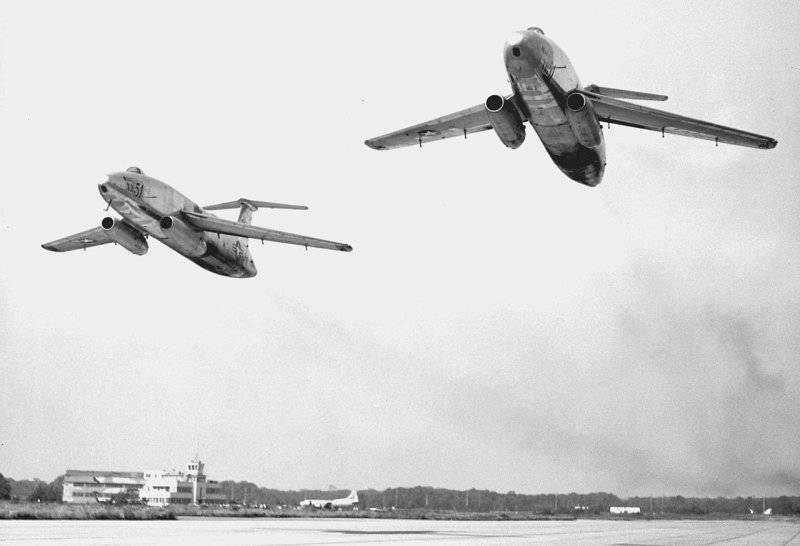 The fuselage of the aircraft was carried out under the scheme of semi-monocoque. In the bow of the assault was supposed to be installed. Behind the weapons compartment was located the cockpit for the pilot and the navigator-radio operator. The first was placed under a fighter-type lamp, the second after the pilot and had a porthole on the starboard. Between the cockpit and the tail engine compartment there was a bomb bay, above which was a wing.

The tandem layout of the chassis for the company was not a novelty: for the first time it was worked out on an experimental modification of the B-26. In addition to the advantages, it also had its drawbacks, the main of which was the difficulty of sharply increasing the pitch angle during the takeoff run. This was due to the location of the rear support far beyond the center of gravity. The various firms overcame this drawback in different ways: some made an elongated front strut, exposing the aircraft in advance to the required angle of attack (it became the reason for the increase in aerodynamic drag during the run); the other front pillars were telescopically extended when the breakaway speed was reached (causing substantial weight and structural costs). Some solved the problem by increasing the area of ​​horizontal tail. The company "Martin" went its own way and created a wing with a variable installation angle during takeoff: the wing, which has a 34 sweep on the leading edge, is turned around an axis that lay in the plane of the rear longeron of the center section. The wing had a negative transverse "V" angle. It was supplied with flaps and slats, which took most of the scope. The transversal control was provided by interceptors located on the upper surface and small ailerons at the ends of the wing. For lateral control at low flight speeds, flaps were also used, which had the possibility of differential extension. The control of the flaps was mechanically connected with the control of the wing angle.

The use of a wing of this design allowed to take off and land when the fuselage was almost in a horizontal position. This made it possible to evenly distribute the load on the rack chassis. The speed of the mechanism for changing the angle of installation improved maneuverability during the transition after dropping bombs to climb, leaving when landing on the second circle, etc. 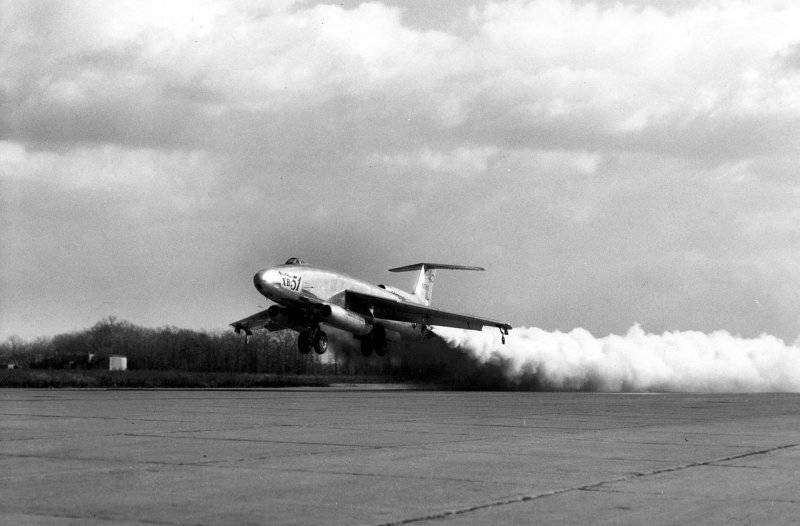 The maximum bomb load of the B-51 was 5450 kilogram. The offensive weapon consisted of eight 20-millimeter or four 75-millimeter cannons mounted in front of the fuselage.

The US Air Force issued an order to build two experienced XB-51 bombers. The first experimental machine with the number 46-685 28 October 1949 rushed into the air for the first time. The testing machine showed itself quite well, and although failures and accidents periodically occurred, the pilots spoke very well about it. However, in 1951, the air force changed the requirements for a front-line bomber, and it turned out that it was not Martin XB-51 that corresponded better to them but English English Electric Canberra. The project was closed and bought a license to manufacture an English-made bomber. The production of English cars was developed precisely at Martin. Both experienced XB-51 after the curtailment of the program continued test flights, taking part in various research programs. During maneuvering at low altitudes 9 in May 1952 r crashed a second prototype. The first prototype continued to work in various research programs. 25 March 1956, he crashed during takeoff. The commission for investigating accidents with XB-51 bombers concluded that both accidents did not occur because of equipment failures — the machines were reliable — but because of the pilot error, ... 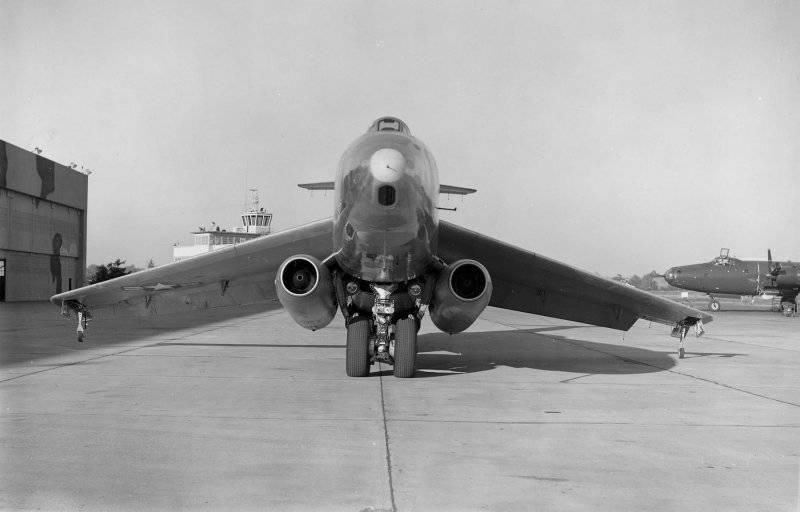 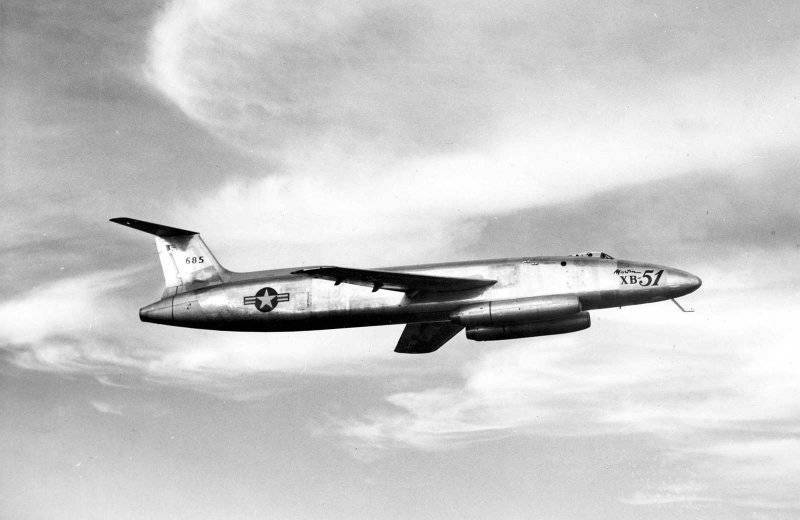 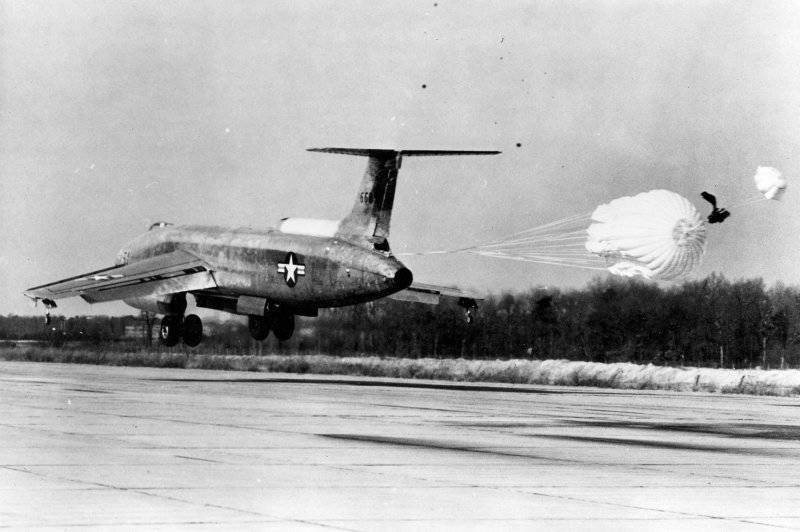