What is the cosmos silent 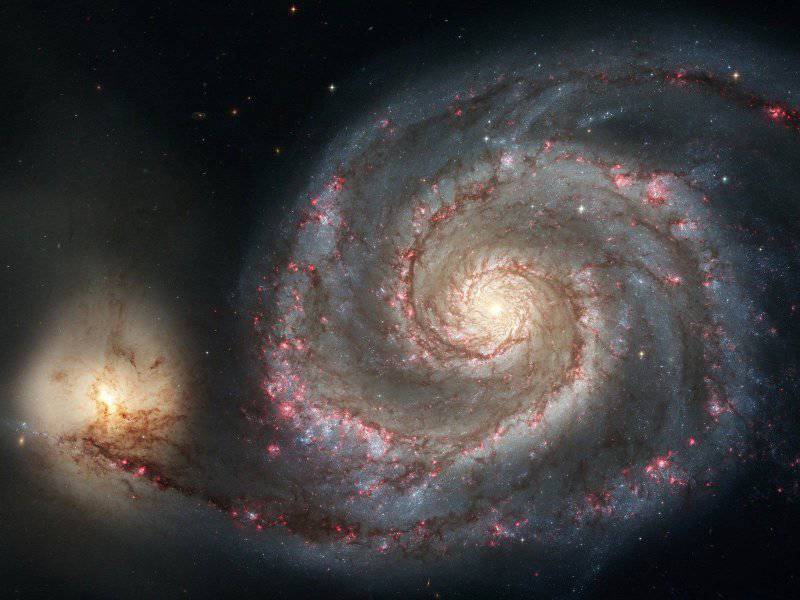 1 December 2009 of the year the UFO Department at the Department of Defense of the United Kingdom stopped its work. According to a popular statement by officials, the reason for the closure of the UFO desk was the absolute uselessness of the department in ensuring the security of the country. For 50 years of intense research, no reliable confirmation of the existence of "flying saucers" and "newcomers" was received.

Of course, the closure of the British military department for the study of UFOs is nothing more than a curiosity ... and the "department" itself was a tiny office in which only two people worked - an officer and a non-commissioned officer, whose duties included collecting and systematizing all the information coming from eyewitnesses UFO. Alas, these two researchers could not find anything worthwhile, and all the evidence obtained turned out to be trivial photo fakes or the result of some rare natural phenomena (halo, mirages, etc.).

In every joke there is some joke - behind all the seeming frivolity of the event that happened on the shores of Albion, there is a real Problem - an impassable blank wall that has got in the way of the development of modern science.

The fact that the world is far from being simple, people have long guessed - Aurelius Augustine, who lived in the 4th century AD, reasonably noted that all the most important discoveries and achievements of human civilization occurred in the recent past - the memory of generations has preserved the names of most of the authors of ancient treatises and discoveries.

Eratosthenes was the first to calculate the diameter of the Earth - the cunning Greek calculated the characteristics of the planet using the simplest trigonometry (the difference between the angles of inclination of the sun's rays in Siena and Alexandria, with a certain distance between the two cities).

Ptolemy created his inimitable “Almageist” - a collection of astronomical knowledge, including a catalog of the positions of 1022 stars.

There is nothing surprising here: according to modern concepts, the duration of the active phase of human Civilization hardly exceeds 6 000 years - since the appearance of the first cities, the writing system and the beginnings of ancient cultures.

Another circumstance is much more important: the being of the Civilization obeys the exponential law - the longer it exists, the more intensively its development takes place.
1861 year: “I saw the red day, there is no slave in Russia” ... and, just 100 years after the abolition of serfdom, the Royal Seven carried Yuri Gagarin into space.

None of the science fiction writers of the mid-20th century was able to predict the further direction of evolution. Remember, like Efremov in the “Adromeda Nebula”: “Erg Noor sat behind the levers of a calculating machine.”

Instead of flying to Mars, microelectronics and information management have become the main global trend. August 2006 of the Year: the Japanese company Hitachi announced the creation of a hard disk with a capacity of 1 terabytes - a large academic library in the palm of your hand! Writing similar textual information on paper would require 50 thousand tree trunks.

Civilization is evolving at explosive speed - the whole huge, incredibly complex world was known in just a few decades of the last century ... sounds too boastful, but the fact remains: modern science took a few years to derive the basic laws of the universe. Sensitive antennas of giant radio telescopes allowed to look into the depths of the Universe, and magnetic colliders allowed to split the matter into separate quarks and gluons. Mankind began to understand how this world functions - the result was the emergence of nuclear technologies and unique electronic devices. For the first time in history, we received a real opportunity to destroy our “cradle” - the nuclear flame is capable of shifting mountains and radically changing the conditions of life on Earth.

With regard to the success of genetic engineering and space flight - who is now surprised by such events? Is that the launch was unsuccessful, and the exploding booster has blossomed in the sky with colorful fireworks.
It is terrible to imagine what heights Civilization will achieve in another thousand years! And through 10 thousand? (of course, subject to the successful development of events - no world nuclear wars and epidemics of incurable fever) 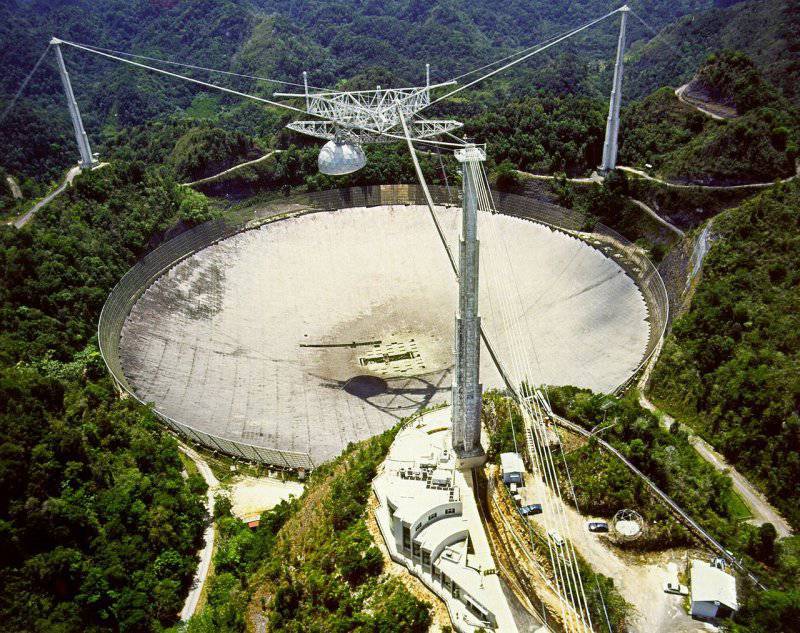 Arecibo Observatory. 300-meter mirror of the radio telescope installed in the crater of an extinct volcano 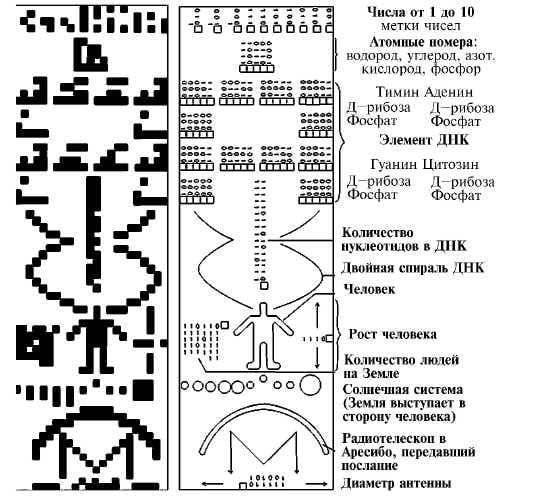 16 November 1974 was sent from Arecibo to a radio message in the direction of the constellation Hercules, containing basic information about man, the solar system and our civilization. Decoding a message consisting of 1679 digits requires a lot of mathematical tricks and uncommon logic.

According to the modern cosmological model of the universe, the age of our world is 13,8 billion years. How many times does the duration of the active phase of human civilization fit into this figure? More than 2 million times!

Two million times a civilization like ours could have originated somewhere in the depths of space, reach heights of knowledge and disappear again in the millstones of ruthless time. Or vice versa - having arisen once, continue its inconceivable way through billions of years, having reached by now some completely unreal power on a galactic scale.

By May 2013, the number of exoplanets found in the nearest stars reached the number of 889 units - almost each of the nearest stars, which the researchers look at, has its own planetary system. The Milky Way Galaxy consists of 200 billions of stars. The number of galaxies in the visible part of the universe is estimated to be about the same figure. 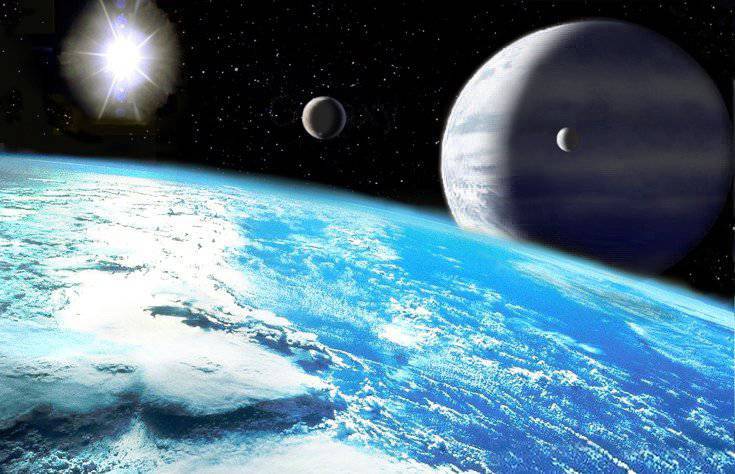 Ypsilon Andromeda D - the fourth planet in the system of a sun-like star υ Andromedae
The presence of water vapor is detected in the spectrum.
A huge number of possible options for the birth of life, billions of years, the rapid pace of development of civilizations ...

Substituting these values ​​(corrected for various unfavorable factors) into the Dyson formula and other cosmological calculations, scientists obtained a unique result — all probability theories show that the number of highly developed civilizations in the Universe must now be calculated by a number with many zeros!

According to all calculations, the indescribable should happen in heaven: driven by an unknown force, the stars should collide and unwind the "sleeves" of spiral galaxies; everywhere in the sky should be constructed "Dyson Sphere" or other fancy objects of artificial origin.

Without any illusions about the kindness and peacefulness of technological civilizations of the terrestrial type, we must observe the brutal battles of starships and "flying saucers." Highly developed aliens should burn each other with thermonuclear fire and blast galactic nuclei, the “death star” should emit its sizzling rays, and many space bodies right before our eyes must undergo changes and terraforming in order to expand the living space of extraterrestrial civilizations.

The entire electromagnetic spectrum should be penetrated by signals - by rotating the frequency tuning verniers, radio amateurs would be able to catch the broadcast of the reality show HOUSE-200 from the constellation Eridanus (a million-year-long telecast - and why not?). 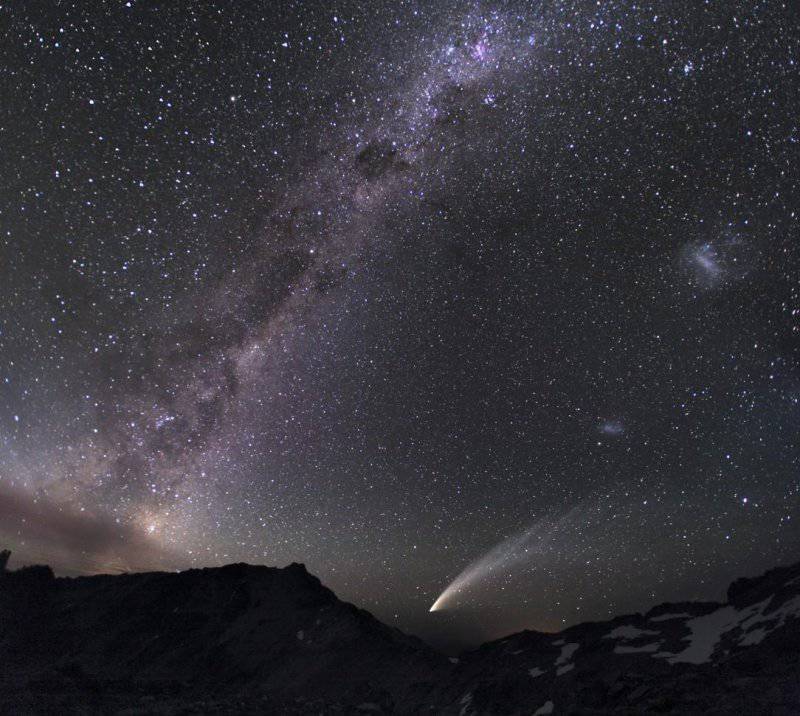 Speaking in scientific language, many inexplicable and mysterious phenomena of clearly artificial origin should occur in the starry sky, which would certainly attract the attention of earthly researchers. Those “cosmic miracles”, the appearance of which was predicted by Konstantin Tsiolkovsky!

BUT ANYTHING THIS IS NOT GOING ON

The infinite space is quiet and calm - only velvet blackness and cold twinkling of stars. 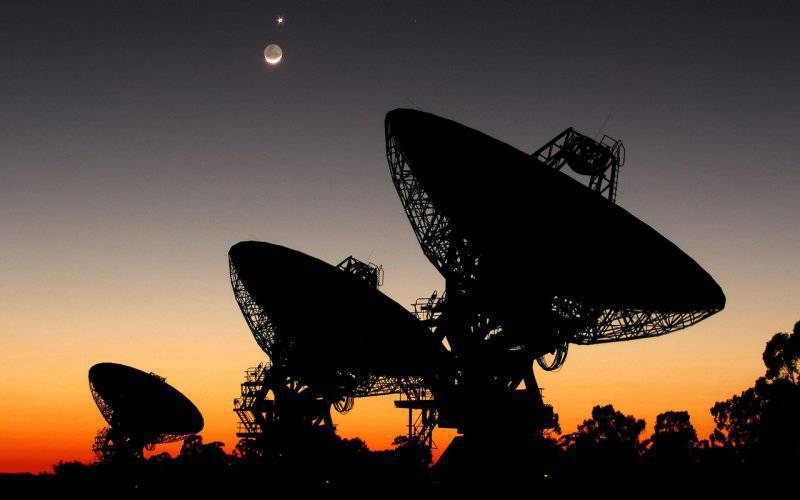 With the help of modern astronomical instruments, the human mind has penetrated into such depths of the Universe, where even the wildest imagination cannot penetrate: the cellular structure of the cosmos was discovered, relic radiation and black holes were discovered. The sensitivity of astronomical instruments is amazing: the energy received by all radio telescopes of the Earth for the entire period of existence of radio astronomy is not enough to heat a drop of water at 1 ° С. A modern radio telescope is capable of viewing even the most distant quasars, remote from the Earth by 13 billion light years.

In vain! No signs of “cosmic miracles” - all movements, vibrations and characteristics of the studied celestial objects are subject to the influence of gravity and other natural causes.

June 1967 of the year. Did it happen? Graduate student Jocelyn Bell once again verifies data from the University of Cambridge observatory - there can be no error, a source of periodic radio pulses was found in the sky. This is an extraterrestrial radio station!
The object was assigned the index LGM-1 (Little Green Men - "little green men"), but, alas, everything turned out to be much simpler - the scientists discovered the first pulsar: a furiously rotating neutron star with a shifted magnetic pole. To date, more than 1800 of similar objects have been discovered in the Universe, whose natural origin is beyond doubt. 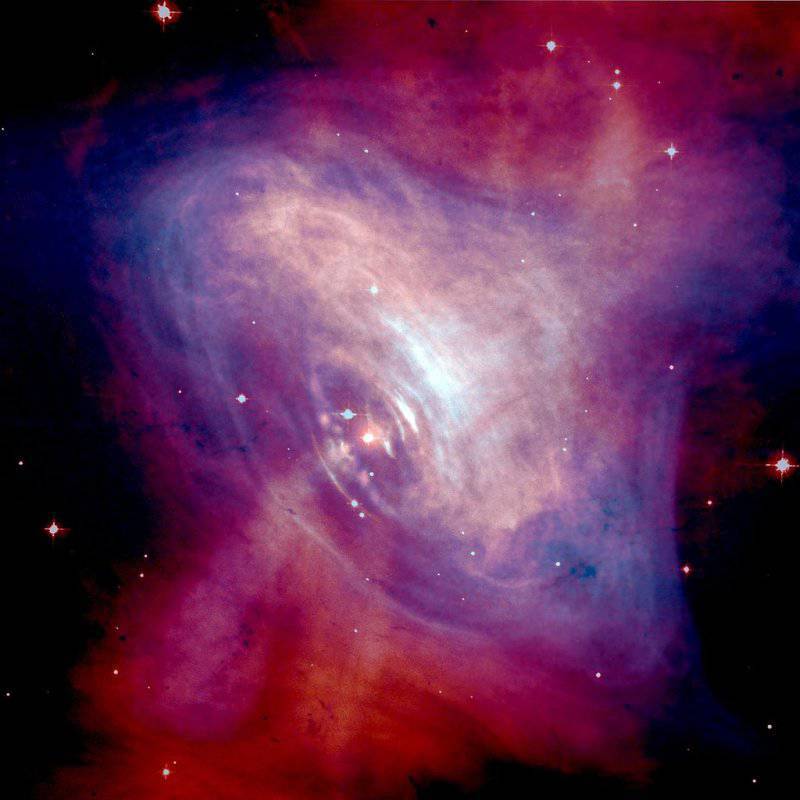 Pulsar in the Crab Nebula.
The picture was taken by the Chandra space x-ray observatory.
To date, perhaps the only case of the “cosmic miracle” can only be considered a strange radio signal received at the Big Ear radio telescope in 1977 year *. The signal, designated as Wow (“Wow!”), Was just a minute burst of radio emission at the frequency 1420MHz - so as not to bore the reader with long excursions into physics, I would just note that this frequency is directly related to the fundamental laws of nature and is considered the most priority channel for search for extraterrestrial civilizations. The laws of physics are the same for all - the “aliens” will probably guess to use this particular frequency.

* another similar signal on the 1420MHz frequency, coming from another point of the sky, was registered by the Arecibo Observatory in 2003

As for the Wow signal itself, its nature remained unexplained. Failure of the receiving equipment, accidental reflection from a piece of space debris, and maybe indeed ... Unknown. More signal is not repeated.

The Tower of Babel

The phenomenon known as the Great Silence of the Universe is becoming more and more a crisis of modern natural science. The absence of “cosmic miracles” has only two reasonable explanations:

1. We are alone in the universe

2. Something terrible is happening before our eyes.

Also, there is a third version - “the contact took place, but the authorities are hiding,” but we will not dwell on this issue in detail, because here begins pure conspiracy and pseudoscience.

With the thought of our solitude in the vastness of the vast Cosmos, it is still possible to reconcile (scientists admit that this is an absolutely unbelievable situation - life can have innumerable forms, and a huge sample of habitats gives an amazing picture of the densely populated Universe).

The second answer causes goosebumps running over the back. The crisis of modern natural science is directly linked with the upcoming crisis of our civilization - we, like thousands of other highly developed cultures, face inevitable death. The myth of the Tower of Babel turned out to be a formidable prophecy: having reached a certain limit, civilization disappears (collapses / degrades / collapses).

"I do not know how weapons the Third World War will be waged, but the Fourth - by stones and sticks "

Warm southern night, singing cicadas. A bright flash of a match for a moment splits the darkness, a stream of smoke flows upward. Damn ... but there is something to think about. Summer Triangle - Lyra, Altair, Deneb ... The Swan, spreading its wings, flies along the Milky Way ... Pegasus ... the letter "M" is written a bit higher in the zenith ... dim brilliance lit by the glow of a big city. Some stars are floating among the stars. Miracles? Hardly. Just a belated flight from Sheremetyevo.

Black mist, stars twinkle
And they hide something from people ... 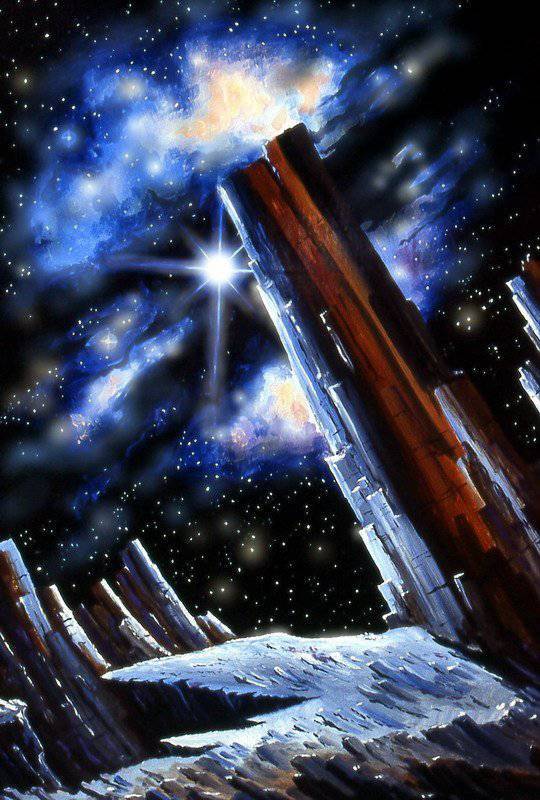 Ctrl Enter
Noticed oshЫbku Highlight text and press. Ctrl + Enter
We are
The history of the future: how humanity makes its way into spaceSpace systems of the US military communications: analysis of the state and development
Military Reviewin Yandex News
Military Reviewin Google News
116 comments
Information
Dear reader, to leave comments on the publication, you must to register.