The work of art of the early Middle Ages, a sample of high technology of its time, and, moreover, the most perfect for that era weapon.


This combination can be found only in rare specimens. But this blade can hardly be called even rare. Perhaps he is just the only one. This is a saber, whose age, according to experts, is 1000-1500 years. This is one of the oldest versions of the saber, as such, and, moreover, it can be said, a miraculous preservation. It is known that the first sabers appeared after the creation of a saddle and iron stirrups in the middle of the 1 of the millennium of our era, as a more effective blade weapon for combat in the equestrian system, as compared with a straight double-edged sword. Its main features are a handle slightly bent to the blade and a curved blade. Due to this, the saber at the moment of impact does not form a blunt edge with an outstretched hand, but becomes its direct continuation, and the bend provides a chopping-cutting action: the blow is obtained sliding and captures a large surface. So - this sample refers to the very first, most ancient versions of sabers. In fact, it is even a transitional form, retaining a number of signs of a straight double-edged sword, first of all, a rhomboid section of the blade with well-developed edges and centrally thick to 5,5 mm.

However, the bent handle, as well as a slight bending of the working surface of the blade and the deflection of its back - 4 mm from a straight line - allow us to classify this sample as a saber. Its total length is 795 mm, the length of the blade to the crosshair is 717 mm, width is 30 mm. The ellipsoid saber cross makes a special impression - very precise, elegant work, 105 mm long. Such a combination of external forms and proportions corresponds to the description of the weapons of the ancient Turks in the famous historian L.N. Gumilev in the book “Ancient Turks”: “these are swords with a small bend and a massive diamond-shaped blade in cross section”. Archaeologist Alexei Alekseevich Charikov, who first studied the discovery, even without any preliminary information about it, confidently concluded: yes, this is the sword of the ancient Turks, made approximately in the 6th century. BC (hereinafter all dates refer to our era). A.A. Charikov worked for many years at the excavations in the Western Altai and more than once saw similar blades (more precisely, what usually remains of them) during the excavation of mounds, dated to various features by this very century - the century of the emergence of Turkic tribes historical arena. But more about that later.

Perfect in its simplicity, the “laconic” construction of the saber speaks of its reliability and ultimate functionality, designed for multiple combat use in isolation from the production centers, in conditions of months-long, and often long-term hikes. The first glance at this weapon caused an admiring exclamation: “what a simple but powerful job!”. Unique and the preservation of this sample, just incredible for the age of 1000 - 1500 years. According to archaeologists, at one time the saber fell into a funeral pyre, the sheath and hilt burned, and a thinnest oxide film formed on the surface of the steel, preventing further rusting. In addition, over the course of the century, weapons, apparently, remained in the surface horizons, without being subjected to the destructive action of soil salts and acids. Blades of similar age, found in deeper layers, for example, in barrows, have a much worse condition. In fact, these are just puff stripes of rust - but they, nevertheless, are carefully kept in museums. 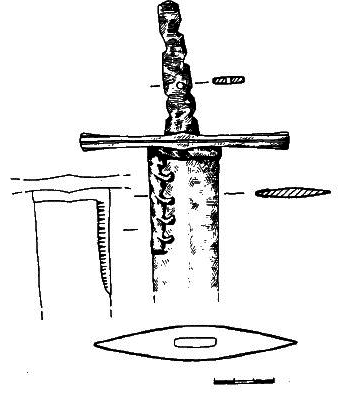 ... A blade of quality steel was everything for a medieval warrior: both the first pride and the last hope. The cost of a good sword, saber reached the price of a war elephant or whole herds of horses. (Therefore, by the way, modern film versions of the then sword fights do not stand up to criticism - however, like most historical films with weapons. In battle, the warrior parried the enemy's blow with a shield, and only as a last resort, outside the battlefield, in the absence of full equipment, the blow was reflected by the blade.) And the main share of the cost, its absolute value, was not the decoration with gold and precious stones, but the quality of the steel of the blade.

Well-preserved medieval knives come mainly from the arsenals of feudal castles and fortresses. But this is characteristic of Europe or Japan. Nomadic tribes, and even in the states that arose on their territories, did not have such repositories. All cash blades were always ready for battle and were used to the end, even the wreckage was converted into knives and other small tools. The only exception was weapons buried with their owners in mounds or funeral pyres. Typically, such burials with rich utensils were arranged for military leaders and leaders, so the quality of the blades buried in them was initially high. But the weapons of nomadic peoples, which have been extracted from mounds in our time, presented in museums, have, basically, an unimportant state. Thus, the saber presented here is distinguished by its excellent preservation for its age, its rare origin and, accordingly, its exceptional historical and collection value. The history of finding a unique blade is not completely clear. According to reports, it was accidentally found by local residents in the foothills of western Altai, in the so-called Valley of the Dead - the largest cluster of mounds and the remains of funeral pyres in this region. The exact time of the find is also unknown, most likely it was from the 18th-19th centuries, after which the saber was stored in the families of the Siberian Cossacks, and only very recently became available for scientific research and description. Already in our time, the blade and the crosshair were cleared, that is, the thinnest layer of patina was removed, which protected steel for centuries and retained its structure and properties. As a result, the saber came through the centuries to the present day not only preserved, but fully operational. And, by the way, for this reason, fate prepared for her, after the test of time, new tests in battle. People who had no idea that they had found a real treasure used it for the most utilitarian purposes - for training in fencing, attaching a simple wooden handle to it. And in his last “battle” at the end of the 20 century - not on the battlefield, but in the gymnasium - the ancient saber turned into a scrap metal, having completely bored, a heavy Japanese sword made of hardened steel ...

All this is one of the examples of how the greatest values ​​of world culture can easily disappear (and often disappear!). On the other hand, here the amazing qualities of the weapons of the ancient masters were clearly manifested. What were these masters?

In the early Middle Ages, in Southern Siberia - in the region of Altai and the Sayans - there was a powerful center for the extraction and processing of iron with the highest level of technology that surpassed neighboring China and other centers of civilization. For example, according to archeology, oblique notching of files for metal processing, used in our time, was known here as far back as the 1st century, whereas in Western Europe it appeared only in the 15th century. Here files were made for processing jewelry with a notch in the 3-4 grooves on 1 mm. The ancient masters in this region knew the technology of powder metallurgy. They made weapons from cast bulat, the technology of which is now completely lost. In order to give the blade mutually exclusive properties - hardness and toughness, sharpness and flexibility, the steel must be heterogeneous in chemical composition and structure. In the more well-known welded Bulat, heterogeneity was achieved by combining iron and other components with the help of forge welding and subsequent forging; therefore, it is characterized by multi-layering, giving a special pattern to steel. Cast damask was also made of iron with various additives, but here they were combined during smelting in one crucible. Only a very experienced master, using a special technology, could make such a heat. In comparison with welded, cast bulat technology is more complex, but also more efficient.

One of the legends speaks about the amazing mastery of the gunsmiths of the ancient Altai, about their knowledge of the properties of steel. In the first centuries of our era, hordes of Huns moved westward into their fateful journey, enslaving and destroying the tribes and peoples found in their way. In the mountains of Altai, the conquerors met with warriors who could not retreat, preferring death to defeat. These were the few but perfectly armed troops of fair-haired and fair-skinned people — quite possibly the remnants of the eastern branch of the ancient Aryans. Offensive impulse and strength were on the side of the enemies. And in unequal battles with them the Aryan detachments melted. But the Huns suffered heavy losses. Realizing that they would not succeed in subjugating this people, they offered peace on the condition that the masters of Altai would make for them as a tribute a batch of their blades — the best in the whole known inhabited world.

The mountain tribe faced a choice: to die completely or to obtain the necessary respite, but by giving the enemy a weapon, which soon, undoubtedly, would turn against them. And the Altai defenders were saved by their masters. They added components to the "enemy" blades that destroy the steel structure a year after production.

By the agreed time tribute was ready. The Huns arrived after her, but their leader questioned the quality of the weapon. Then one of the gunsmiths took the first blade and offered to try it in action. After a short battle, the sword of the leader was completely out of order, and the Altai master received only small barbs. But the all-destructive steel carried the genes of self-destruction ...

Centuries passed, the appearance of the inhabitants of Southern Siberia changed, but the level of skill of its gunsmiths remained consistently high. It was not for nothing that in Altai and Sayan there were numerous traces of iron ore workings and furnaces for smelting metal.

And not from legends and legends, but from chronicles, researches of historians and archaeologists, it is known that the tribes of the ancient Turks, who originally lived in Altai, in the first centuries of our era paid tribute to their more powerful neighbors at that time - Jujans - and actively traded of iron, first of all weapons. Together with silk from China, to the west, along the Great Silk Road, caravans carried blades from South Siberia. In this regard, it must be emphasized that in those days there was still no such thing as “Damascus steel”. Good blades in Syria and Arabia VI. were imported - oriental origin. In the biographies of the Prophet Muhammad it is said that he himself and his associates were armed with blades, like the Siberian saber presented here.

There is evidence of connections in the opposite direction. During archaeological excavations in Southern Siberia, bronze mirrors and other items of Japanese manufacture were found in the cultural layers of the early Middle Ages - convincing evidence of the mutual contacts of this region with the Land of the Rising Sun. And in the light of what has been said, it is quite reasonable to suppose that the technology for producing bladed weapons came to Japan of that era precisely from Siberia, and its secrets were not completely “stolen” - after all, the Japanese did not reach the level of the local masters.