India intends to do military robotics

July 18 2013
7
Currently, the leading countries of the world are working on the creation of unmanned and remotely controlled military equipment of various classes. The practice of using such ground, flying and floating devices has vividly demonstrated their effectiveness. Remotely controlled vehicles are capable of performing a wide range of tasks, including those in hazardous conditions, without putting their operator at risk. In this regard, such a direction of military equipment has a special priority and attracts the military of the whole world. As it became known, the list of countries involved in the creation of their unmanned vehicles will soon be replenished.


In early June, a publication appeared in the Indian edition of the India Times with some excerpts from an interview with the head of the Defense Research and Development Organization (DRDO). As the Director of the Organization, A. Chander, said, at present one of the top priorities in the development of Indian military science and technology is the creation of remotely controlled equipment. In this regard, DRDO began a research program, the purpose of which will be to develop the appearance of promising combat unmanned vehicles and robots, and then the creation of an appropriate technical project. 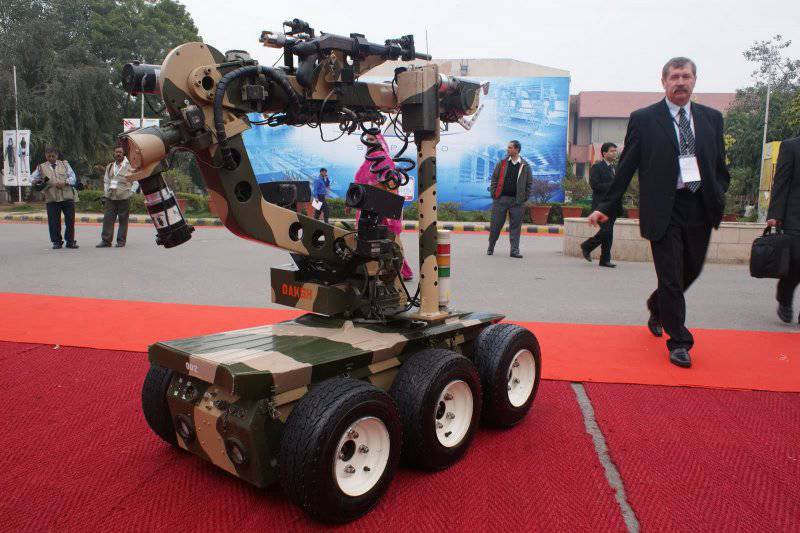 Chander believes that the future of the war is for unmanned or robotic systems. In the near future, such devices will support living soldiers, but in the future they will begin to expand their sphere of application. One of the prerequisites for such an expansion of Indian scientists believe the ability to save the lives of their soldiers. A combat robot or similar remotely controlled equipment, while performing the task, will allow not to send soldiers to the front line. In the context of the work of the Indian armed forces, such capabilities, among other things, will be useful for border patrols. As an example of the area where fighting robots can serve, A. Chander cited the so-called Line of Control - the demarcation line separating India and Pakistan and passing through the territory of the former principality of Jammu and Kashmir.

Despite the recent start of work in this direction, Indian scientists and engineers have already determined the approximate timing and main tasks. It is assumed that the bulk of the work will be completed over the next ten years. At the same time, researchers face very difficult tasks, because a promising combat robot must possess some elements of artificial intelligence. Therefore, the entire program is divided into several stages, each of which will have its own goals.

Thus, during the first stage of the development of a combat robot, it is planned to “teach” electronics to recognize combatants and civilians, as well as to identify its soldiers. Already there are certain developments on the topic of pattern recognition and similar tasks seem feasible. At the same time, Indian scientists will have to seriously work on this issue. Then the robot will receive all the necessary "knowledge and skills" needed to work in combat conditions, including at the forefront, in the same line with the living soldiers. In the final stages of the program, it is planned to ensure the full-fledged work of the combat robot in various conditions. Among other things, it is planned to create a certain system with the help of which an autonomous device will be able to maintain contact with soldiers and exchange information with them. Other details of the project, for obvious reasons, have not yet been announced. According to A. Chander, such studies are already underway in several countries and there are some successes.

The problem of artificial intelligence has long been confronted by scientists, but so far there is not a single such system that fully meets all requirements. Because of this news about promising Indian project caused a shaft of identical comments. The public interested in science and technology doubts that India will be able to solve all existing problems on its own and create a functioning system with artificial intelligence capable of performing tasks, at least in its own field.

The second remarkable question concerning the Indian project of combat robots relates to the planned dates for its completion. It is quite clear that in the next ten years or more, other countries that also have military robotics projects will not sit back and continue their research. Thus, by the time the Indian project is completed, similar systems may also appear abroad. Because of this, India will have to not only develop a unique system, but also participate in a kind of race with other countries that have already launched their projects.

Another specific task for Indian scientists will be the elaboration of the appearance of a promising military means. In the best case, the new robot will go to serve in the mid-twenties, because of what is required today to analyze the features of current hostilities and possible conflicts of the future. According to the results of this analysis, you will need to create a complete list of requirements for advanced automatic technology. Such a document will determine the course of the entire future program and therefore its creation is of great importance. If you incorrectly define the requirements for a combat robot, the shortcomings will manifest themselves only in 10-12 years, which makes their correction much more complicated.

However, the Indian Defense Research and Development Organization firmly believes in the need for research on autonomous robotic combat tools. So far, for obvious reasons, it is too early to talk about any actual results of the project, but the intentions of Indian scientists attract attention and are of great interest to specialists and people interested in this topic.