Reflections of a bloody "volcano" 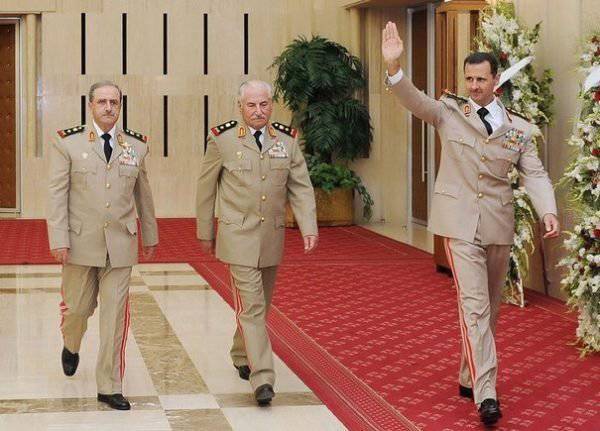 18 July marks exactly one year from the day of the terrible terrorist attack in the National Security building, which killed prominent Syrian military leaders.

Let me remind you - then the Western-backed rebels announced the storming of the Syrian capital and the beginning of the operation "Volcano in Damascus, an earthquake in Syria." The assault on Damascus that was undertaken the day before, of course, failed - even having gathered all the forces into a fist, the destroyers of war and the arsonists of the war could not take this impregnable citadel. All that they managed then was only to take control of two quarters - Tadamun and Midan, which were soon cleared by the army.

But the bandits managed to do what they are strong at - to organize a terrorist attack ... The explosion at a meeting dedicated to the defense of Damascus killed Syrian Defense Minister Daoud Rajha, his deputy Hasan Turkmeni, generals Yusef Shaukat, and Hisham Bakhtiyar. Muhammad al-Sha'ar, Minister of the Interior, was seriously injured.

Actually, in this attack, which was probably arranged not without the help of foreign intelligence services, all the "successes" of the bandits ended. The coup failed, it was not possible to organize a panic at the top, a new minister of defense was appointed in a matter of hours, the army soon liberated the quarters occupied by the terrorists, and the minister of internal affairs, to whom the militants predicted death, soon returned to service. After that, the bandits talked three times about attempts to storm Damascus, but all these attempts were weaker than the first one ...

A year has passed. Damascus stood as it stands. The army inflicted many blows on the militants. And if their numbers had not been replenished at the expense of foreign mercenaries from abroad, it would not have been long for any “revolution” and “war” in Syria to talk about ....

But, alas, "thanks to" the support of the West and the monarchies of the Persian Gulf, the flow of terrorists and weapons does not stop. So, the blood flow does not stop ...

For example, in the province of Hama 17 July thugs launched an explosive device on a highway near the city of Salamia. As a result, a man and a woman were killed, passing by the site of the explosion on a motorcycle.

The bandits also shelled a residential area in the long-suffering suburb of Damascus, Jaraman. This name, unfortunately, is known because there have been so many terrorist attacks lately. Four people suffered.

Speaking at a UN meeting, the Permanent Representative of Syria to this international organization, Bashar Al-Jafari, said that the country continues to face an unprecedented influx of armed extremists entering the country with the help of Qatar, Saudi Arabia, Turkey and other countries. He said, in particular, that one and a half thousand militants from the Pakistani Taliban crossed the Syrian border from Turkey
The diplomat also recalled that Syria had sent 413 messages to the Security Council and the UN Secretary-General, which told about the penetration of foreign militants into the country - with all the necessary data, documents, evidence. Syria did not receive an answer.

Syria has repeatedly demanded that the UN take steps to stop the flow of militants and weapons. But the UN is silent. People continue to die at the hands of gangsters.

Bashar Al-Jafari said: “Qatari Air Force aircraft carrying weapons through Turkish airspace, special flights of Turkey’s secret services from Yemen, carrying al-Qaeda militants, which are thrown into Syria after training, is not a secret. Our allies in the UN Security Council and we ourselves asked to investigate and stop this flow of weapons. "

According to him, the answer must be addressed to the American side, however, it is not able to give such an answer.

Indeed, Russia has repeatedly raised this issue with the UN. In particular, the Russian Federation appealed to the sanctions committee of the UN Security Council with a request to investigate the incident when an attempt was made to deliver weapons from Libya to Syria. The ship with a huge batch of weapons was stopped in the Lebanese port. But, despite the fact that such a delivery is clearly contrary to all conceivable and inconceivable norms of international law, the UN sanctions committee refused to consider this issue.

The Taliban, whose militants have now infiltrated Syria from Turkey, is known worldwide for ruthlessly destroying statues and other historical Monuments in Pakistan. The Syrian terrorists - the “fighters for democracy", so beloved by the United States, are doing the same.

And, according to some employees of the US Congressional staff, the US authorities have already spent 27 million dollars lately to train terrorists. About a thousand militants under this program were trained in training camps in Turkey. Turkey itself, where the US and the West “did not detect” human rights violations, when Prime Minister Erdogan used a disproportionate force against demonstrators who defended Gezi Park, when reagents that caused chemical burns were added to water sprayed with water cannons. If Erdogan is the "water cannon" of the murderous pseudo-democracy, then the USA is at the same time its big wallet and brain.