Red partisan of the Wehrmacht 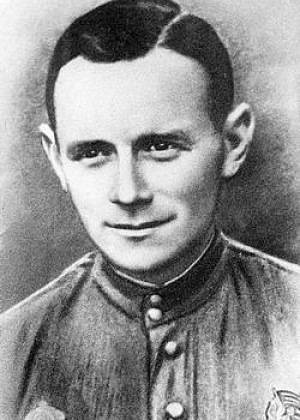 Fritz Paul Shmenkel was born 14 February 1916, in the German city of Varzov in Prussia. The labor activity of his hereditary worker Shmenkel began at the local brick factory.

In 1938, Germany is already preparing hard for war, and communist Shmenkel is called in Wehrmacht. Fritz falls on artillery courses and after graduating from them becomes a corporal - the squad leader, but he does not want to fight for the Nazi ideals. For evading service and simulating the disease, Shmenkel goes to prison, however, in October 1941, the fighting on the Eastern Front became protracted - the Reich needed more soldiers and Shmenkel was sent to the army. However. his service did not last long. 25 of October, he sends his last letter to his close ones, ending with the phrase: "Now I know what to do," and on the same day he deserts.

For several months he wanders around the villages. Locals give shelter to a runaway German, feed him, hide him from German punitive and policemen. The way was ordered to the Fritz partisans — the German prisoners were rarely taken there, but the chances were that they could reach the positions of the Red Army. During his attempt to reach the retreating front, he was seized, probably wanting to arrange a public execution. The fascists left the captive under the protection of local policemen, but suddenly partisans entered the village. The fight was short. The guerrillas, after hearing the locals decided to take the prisoner with them.

One of the partisans recalls: “We didn’t trust Shmenkel for a long time, we were even ready to shoot him if there was a difficult situation. Of”weapons"he had only binoculars. Somehow in one of the villages we were surrounded by punishers, we had to shoot back. The situation was not in our favor, and Fritz asked for a rifle. He was given. It turned out that he was shooting very accurately. (he killed a sniper and several soldiers the enemy, but also gave the commander of the detachment valuable advice, as a result of which the partisans, having undertaken a military ruse, destroyed up to five armored vehicles) When we managed to get out, Fritz already officially received a weapon and became a full-fledged fighter of our detachment. "

In general, the military check Ivan Ivanovich (now his name) stood with honor and joined the guerrilla unit "Death to Fascism", which operated on German communications in the current Tver region. It soon became clear. that Ivan Ivanovich is not only a great shooter, but also a great instructor - who knew all the subtleties of the German small arms, the organizer and the daring saboteur.

In this spirit, some of his operations took place: The commander of a convoy, a middle-aged lieutenant, waved his hand, the column stopped, and several guards, keeping their weapons at the ready, headed towards the car standing on the sidelines. One of the machine gunners shone a flashlight into the salon and immediately stretched out on the counter "attention". Out of the car slowly, without looking at the soldiers, the SS man in black uniform came out, sparkling with silver of general's epaulets. Carelessly biting his teeth, the general demanded that the elder in the column. The run-up lieutenant listened attentively to the imposing SS man for several minutes, then ran back to the baggage train and ordered everyone to follow the general's car. Ten minutes later, the convoy turned onto another road and plunged into the forest. For some time the car moved at the speed of a convoy, but gradually more and more went forward. The lieutenant already wanted to order one of his motorcyclists to catch up with the general and to ask to go slower, but he did not have time - the forest was lit up with flashes of shots. After a few seconds, the column with German ammunition ceased to exist. 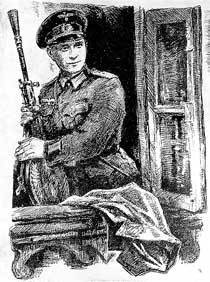 Drawing. History it is unknown, but apparently not from nature, but based on.

In January 1943, the Germans decide to end the partisans and conduct a major military operation. The operation ended with limited success. The detachment was scattered, suffered heavy losses, but a month later the partisans re-united. Fritz Paul joins them, but in spite of his severe frostbite he continues to fight. In March, the Red Army arrived on the detachment's territory and Comrade Shmenkel received his first military award, the Order of the Red Banner.

In the summer, Ivan Ivanovich is sent to the reconnaissance of the Western Front, where he is undergoing special training and, as part of a sabotage group, he is sent to the deep German rear in the Orsha region. For about a month, the detachment performs the assigned combat missions, but military happiness changes the brave communist. The detachment is killed, Fritz Paul Shmenkel, seriously wounded, is taken prisoner. The court martial sentenced him to execution and 22 February in the occupied Minsk sentence is carried out.

The feat of the German-internationalist would have remained unknown if it were not for one accident. In 1961, the KGB investigated the crimes of one policeman gang killed by partisans. It turned out that Fritz Schmenkel was in charge of this operation. Surveys lasted for three years, witnesses were searched and in 1964 a brave German was awarded the title Hero of the Soviet Union for his contribution to the fight against the fascist invaders.

a number of additions:

1. In Minsk, on Freedom Square, the home of 4, where the Nazis placed the Abwehr during the war, in memory of the courageous partisan – internationalist, a memorial plaque was installed with the inscription: “In this building, in February, 1944 was sentenced to death by fascist executioners an active participant in the anti-fascist struggle and the Great Patriotic War German citizen Hero of the Soviet Union Fritz Shmenkel ".

on the publication of Galina Ulitenok from 2008. 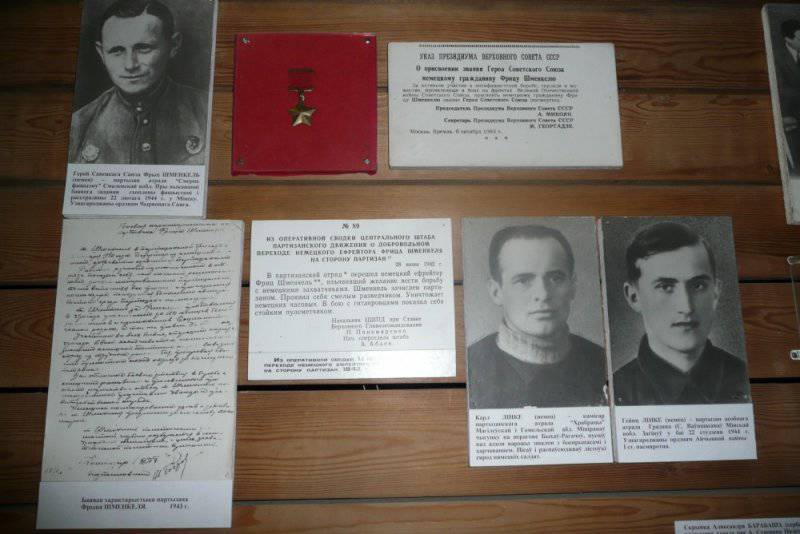 In the Minsk Museum of the Great Patriotic War there is a corresponding exposition.

3. Some are wondering how guerrillas were able to destroy five with light weapons. tanks (armored vehicles?) of the enemy, and what kind of military trick was this proposed by Fritz Paul. Everything ingenious is simple: he noticed barrels of fuel. On the march, German tanks often carried a trailer of fuel in barrels on a trailer. Shmenkel proposed shooting at these barrels with incendiary cartridges.